Will Arye Deri Close the Supermarkets in Tel Aviv? The Political Hot Potato of Shabbat Enforcement in Israel 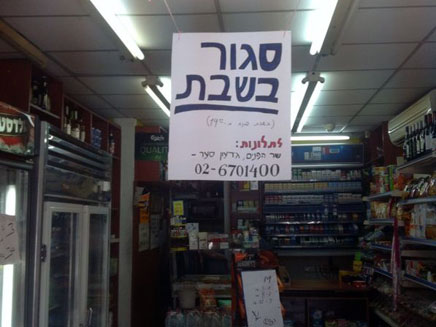 Zeev Kam - my favorite political reporter, just shared this post about a critical meeting that took place this week regarding the issue of stores remaining open for business in Tel Aviv. This issue has been percolating for a number of years, as smaller businesses complain that when larger chains remain open on Shabbat (as they do, and simply pay the fines for breaking the law), the smaller, privately owned stores feel that they too must remain open in order to compete. Some really do want to close because of Shabbat, while others want a day off, as the (secular) law mandates. They've been pushing the government to enforce the law and drastically reduce the number of stores which can remain open on Shabbat in Tel Aviv.

Generally, the Minister of the Interior decides whether to issue exemptions for stores that wish to remain open on Shabbat. Yet, Silvan Shalom, the previous Interior Minister punted, and sent the decision back to the Knesset as a whole (smart move). Netanyahu did what he usually does when confronting a difficult and challenging issue, especially surrounding the contentious issue of religion and state: he formed a committee, which met this week to issue its report.

As Kam describes the meeting, the Chareidi parties pushed hard for the option which would strongly enforce Shabbat. They feel that the State should make a strong statement in favor of Shabbat, even though everyone knows that many residents of Tel Aviv are not Shabbat observant. Media outlets reported that Netanyahu will turn over responsibility for this issue to the current Minister of the Interior: Arye Deri. (Any guess on what he'll decide to do?)

Yet, it's not really that simple. While Deri of course wants to increase Shemirat Shabbat, there are political realities that must also be addressed. At the meeting (which the Prime Minister attended), Minister of Tourism Yariv Levin (Likud) turned to the Chareidim and warned them that the solution must not be perceived as one community (the Chareidim) forcing its standards on the secular public. "Otherwise, Yair Lapid will have 30 seats in the next Knesset." Does Deri care enough about Shabbat to alienate enough secular Israelis to bring Lapid back to power? I wonder.

I would add that the Chareidim themselves bristled at the notion that anyone (i.e. Lapid's party) would enforce its values on the Chareidim, and for this reason insisted on the reversal of the law mandating that all Chareidi schools teach basic secular subjects like math and English. They were right. Change occurs not when one community forces itself on another, but when it comes from within.

This issue began with the secular owners of the stores in Tel Aviv; with professional soccer players who wanted to keep Shabbat without having to work. They must take the lead on this issue and promote the notion that as a Jewish State, Shabbat must be a common value both for those people that observe Shabbat, and also for those that do not.
Posted by Reuven Spolter at 2:23 PM No comments: