Audio Shiur: The Three Oaths - Why Some People Don't Celebrate Yom Ha'atzmaut - and Why They're Wrong

Audio Shiur:
The Three Oaths - Why Some People Don't Celebrate Yom Ha'atzmaut - and Why They're Wrong The three oaths appear in a very famous passage in Masechet Ketubot, and represent one of the basic texts of the anti-Zionist movement. We begin the shiur with a "hook" from Parashat Metzora

Did you know that this shiur is available as a free podcast on iTunes? Click here to subscribe - and leave a comment and rating so more people will find the shiur! Thanks!
Posted by Reuven Spolter at 9:14 AM No comments: 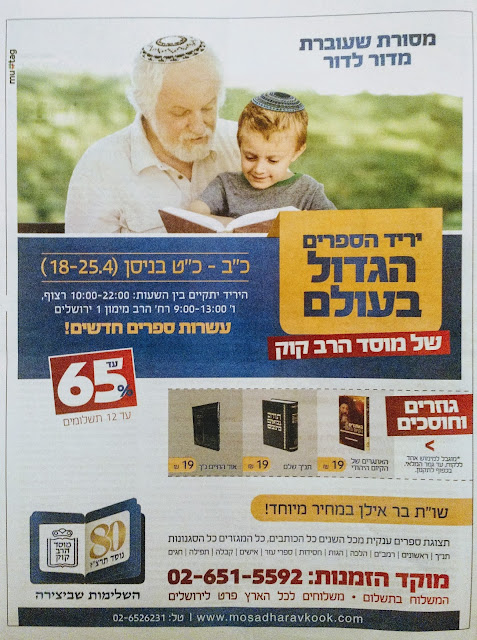 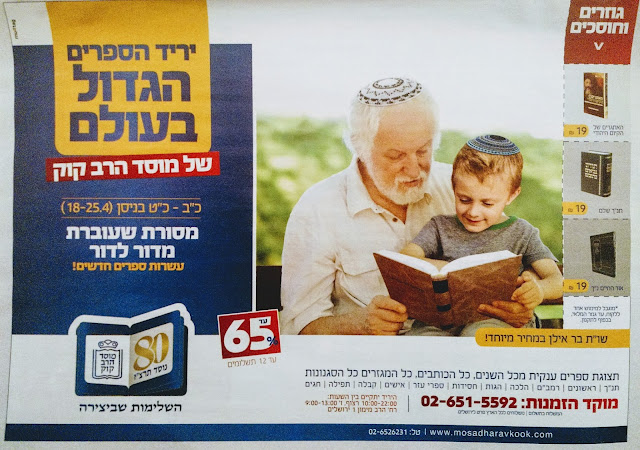 Mazal Tov.
Posted by Reuven Spolter at 10:34 PM No comments:

Following the tragic deaths of Nadav and Avihu, we learn of a cryptic argument between Moshe and Aharon (and his sons). What were they arguing about? Why did Moshe react so strongly?

Did you know that this shiur is available as a free podcast on iTunes? Click here to subscribe - and leave a comment and rating so more people will find the shiur! Thanks!

Posted by Reuven Spolter at 2:18 PM No comments:

The Blessing of Cloth Shopping Bags

At the beginning of the New Year (secular), the Israeli government imposed a new law which required grocery stores to charge ten agurot for the ubiquitous plastic bags distributed around the world. Apparently, the bags were found strewn across the country, and the billions of bags distributed each year represented an environmental disaster that could easily be avoided. Of course we complained, bitterly about the environmentalist overlords sticking their noses into our shopping bags. What would we now use for garbage bags (and diaper disposal)? How would we microwave our food in treif microwaves? Was nothing sacred anymore?

After a few months I'd like to share a few observations:
1. Ten agorot is really not that much money, and yet people (myself included) almost immediately refused to pay for the bags. If you checked (and I did), you recognized that garbage bags of similar size were more expensive than simply paying the ten agorot for the shopping bags. And yet, there I was, buying a box of garbage bags. There must be something psychological that prevents us from paying for something we once received for free.

2. The replacement cloth bags that the chains distributed were a mixed bag. Machsanei Hashuk gave out cheap cloth that can't hold up. On the other hand, Rami Levi...Ah, the Hot Pink Rami Levi nylon bags. They're of such high quality that they've become ubiquitous across the country - at barbecues, school events, picnics, you name it. They're really great. So great, in fact, that Rami Levi stopped making them.

3. While I initially chafed at the law, I immediately began to appreciate some benefits. First of all, the old bags really were terrible, and barely held any groceries at all. You'd have to make trip after trip from the car to the house, back and forth, carrying as many little bags as your hands could handle. They were also prone to breaking. Who hasn't cleaned up a broken bottle of wine or grape juice that resulted from a split nylon shopping bag?

Today I realized that these new bags also save me money - probably a lot. I walked into our local grocery store to pick up a few last-minute items with a single RL bag. This limited me to the number of items that I could carry on my own. In the past, under the old system, I would have gotten a cart and then loaded it up with items that I didn't really need nor want. No longer. Whatever can fit in the bag (and it's a lot) comes home. Less shopping, smaller bills. Perhaps this may be one reason why Israelis spent a whopping 9 percent less this Pesach on food than they did last year (totaling almost 100 million shekels). If I'm right, I'm pretty sure that the grocery chains are rethinking their enthusiastic embrace of the bag ban. They thought it would save them money on bags, which it did. I doubt they imagined it would cost them millions in grocery sales.

So, after a few months, I still like the bags. If I'm stuck, I can always pay the ten agurot for a plastic shopping bag. But we now keep the big bags in the car, so they're always there when we go shopping. They're easier to carry, hold more groceries, are sturdier, rip less often, and save me money. What's not to like?

Oh, and they're probably better for the environment too. That's an added benefit.
Posted by Reuven Spolter at 12:48 PM No comments: