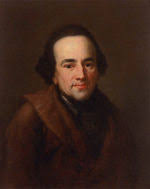 (From a set on Parshat Hashavua called Mei'otzareinu Hayashan. Great set with terrific nuggets like this. Highly recommended.) I share this in the spirit of Parshat Vayishlach, which focuses on the shidduch between Ya'akov and Lavan's daughters.

The philosopher Moses Mendelssohn was, as it was well known, a hunchback. Yet, his wife was unusually beautiful, in addition to the great wealth that she inherited from her father.
How did Mendelssohn arrive at such a shidduch?
In his youth, Mendelssohn served as a teacher in the house of Gugenheim, a wealthy, well-known Berliner. He liked Gugenheim's beautiful daughter, yet at first she was uninterested in him due to his deformity.
One day during a conversation he turned to her and said,
"Do you, my dear, believe in the concept of a divinely inspired mate?"
"Yes," she said, "I do believe that."
"Well," said Mendelssohn, "Let me tell you a story."
Forty days before the birth of a child, our rabbis teach us, they announce in heaven, "The daughter of so-and-so will marry so-and-so!" When I heard the angel announce, "The daughter of Gugenheim will marry Moses Mendelssohn!", I grew curious about her, so I asked the angel, "What will my mate look like? Will she be beautiful?"
"No," the angel told me. "She'll be quite ugly, deformed. She'll be a hunchback."
When I heard this, it caused me great pain so I called the angel. "Go to the Creator and tell him that I'm willing to take her hump on my back, as long as my mate would be lovely, without any deformities..."
Mendelssohn's story touched the heart of Gugenheim's daughter, and she agreed to become his wife.

Email ThisBlogThis!Share to TwitterShare to FacebookShare to Pinterest
Labels: Vayishlach