A Hilarious and Troubling Video 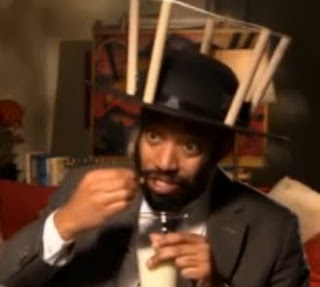 At my first full-time shul, the Agudas Achim in West Hartford, CT, many of the shul's members did not adhere to each and every one of the mitzvot all of the time. Like many shuls in America during the middle part of the 20th century (most of which have gone away), the vast majority of the members were not Shomer Shabbat. Many arrived at shul in the cars, parking in the (open) parking lot. One particular member stands out in my memory. He was relatively younger than the other members (in his fifties at the time), and would drive his minivan to shul every Shabbat.
"But it's OK," he would tell me. "You see, I've put an eruv over the top of the minivan. So when I get into my car and drive here, I'm always inside the eruv."
He was being clever and trite, and hiding the small amount of anxiety his chillul Shabbat generated. I would laugh at his little joke half-heartedly, not finding it all that funny.
But I thought about his joke this week when I saw a video currently making the rounds from comedy central. The report, which aired on the Daily Show with John Stewart, focuses on the ongoing battle between the secular Jews of Westhampton Beach on Long Island, and the Orthodox community trying to build an eruv.


The Jewish guy is truly a caricature of himself. Truly. Notice his rings, glasses, affectation - the whole thing. At the same time, two things about the piece give me great cause for concern.
1. He (and the other secular Jews in the town) really is worried about an Orthodox influx. While he and his group might be bigoted and close-minded, what does his response say about how Orthodox communities interact with their non-Orthodox and non-Jewish neighbors? Some might feel that they're overreacting, but clearly they're afraid of something, and it's not imagined. Even more than walking in the streets on Shabbat, we don't send our children to the public schools, we're exclusionary (at least from the outside), and often disengage from broader community institutions when they don't relate to our own parochial needs. Sure, you can mock the guy. But do we have the right - or the luxury - to absolve ourselves as a community from his concerns?
2. The piece makes the whole notion of eruv seem ridiculous and foolish. Perhaps it would have been better to have a more religiously learned representative explain what an eruv is (something more sophisticated than halfway between Alice in Wonderland and Mr. Snuffalupugus). And John Stewart's job is to mock, which he does quite well, but the mocking and snark raise the challenge of defending ritual in an era of logic and science which regards ritual like eruv with complete and total disdain. (Best question: Can I kill someone in an eruv?)
I think I could do a better job of explaining the notion of eruv, but it really does represent an imaginary enclosure and logically is difficult to explain. I don't have a problem with the notion that fishing wire "allows" me to push a stroller on Shabbat because I subscribe to and understand the system. But we need to confront the reality that to the uninitiated, and especially people who consider themselves learned and sophisticated, the very idea of the eruv seems silly.
How do we promote Judaism and ritual in this kind of anti-spiritual environment? I'm really not sure.
Posted by Reuven Spolter at 1:46 PM