The Destructive Power of Lashon Hara 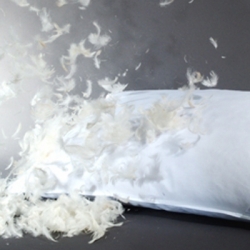 I read recently in the name of Rav Tzvi Yehuda Kook that the weekly parshah - in Hebrew called parshat hashavua - always relates in some way to the week's events. It's not just the section that we read in the Torah; it's the story of the given week as well. This week Rav Tzvi Yehuda's idea seems especially relevant, given that the subtext of Parshat Metzora is tzara'at - and the lashon hara that causes it.

Judge Richard Goldstone has been in the news of late. Last week, in a now famous mea culpa (Yiddish for "my bad") in the Washington Post, he admitted that while his report indicated evidence of war crimes on Israel's part, now in fact it has become clear that,


"civilians were not intentionally targeted as a matter of policy."

"Oops. Sorry. Can we all go home now?"
No judge, we can't. Because while you now probably think that you've wiped your hands of this whole sordid affair, you can't undo the damage that you've caused and will cause to the State of Israel and Jews around the world.
I'm reminded of a famous parable told about a Jew who told vicious lies about the town's rav. After a time the man felt pangs of remorse for his actions, and begged the rav for forgiveness. "Of course I'll forgive you," the rabbi told him. "But before I do you must do one thing for me."
"Anything," the man promised.
"Go to the center of town with a pillow, and rip open the pillow and spread the feathers into the wind. When you're done, come back to me."
The man, puzzled, did what the rabbi asked and split open a feather pillow in the center of town. When he finished, he returned to the rabbi for his forgiveness.
"One more thing," said the rabbi. "Now go and collect all the feathers."
"That's impossible!," said the man. "I can't possibly collect all the feathers?"
Asked the rabbi, "And what about my reputation? How will you return that to me?"

You can't say "oops, sorry" and undo lashon hara. It doesn't work that way. People with an axe to grind against Israel will forever use his original report as fodder against Israel, and claim that his retraction had more to do with pressure from the Zionist cabal than any sense of justice or remorse.
Commenting on Parshat Metzora Rabbeinu Bechaya (on Vayikra 14:2) writes,

ואמרו במדרש: (תנחומא ב) "מות וחיים ביד לשון" (משלי יח, כא), הכל תלוי בלשון, זכה לחיים, לא זכה למיתה, עסק אדם בתורה בלשונו זכה לחיים, והיא התורה שנקראת עץ חיים, שנאמר: (משלי ג, יח) "עץ חיים היא למחזיקים בה"...עסק בלשון הרע מתחייב בנפשו למות, שקשה לשון הרע משפיכות דמים, שכל מי שהורג אינו הורג אלא נפש אחת אבל המספר לשון הרע הורג שלשה: האומרו, והמקבלו, ומי שנאמר עליו.
And [the rabbis] said in the Midrash, (Tanchuma 2) "Life and death are in the hands of the tongue." (Proverbs 18:21) Everything depends on the tongue. If one merits, he [receives] life, if he doesn't merit, he [receives] death. For if one engaged in Torah with his tongue, he merits life, for it is the Torah that is called the tree of life, as it is written, "It is a tree of life to those who grasp onto it."...If one engaged in slander [with his tongue] he obligates himself to [be punished with] death, for slander is worse than murder, for anyone who murders only murders one soul, but one who speaks slander kills three: he who spoke slander, he who accepted the slander, and the subject of the slander.

Is slander really worse than murder? Again quoting the Midrash, Rabbeinu Bechaya explains that at times it really can be worse than murder. The book of Samuel relates the tragic tale of the murder of scores of priests in the priestly city of Nob at the hands of King Saul, (see Samuel I Chapters 21-22). A slanderous report of Do'eg the Edomite set events in motion that lead to the murder of the priests, and ultimately the fall of Saul. Slander certainly can and does lead to murder.

What about Judge Goldstone? Are his words really worse than murder? Has anyone died yet? In an age of global communication, it's impossible to know to what degree the report that bares his name emboldened international terrorists who murder civilians in the name of the Palestinian cause.
Moreover, even after Goldstone's retraction, the Israeli Defense Forces, and especially its soldiers and commanders certainly keep the report in mind, and will be forced to do so during any future action. Every soldier and commander will need to evaluate not only his or her own mission security, but how their actions will be scrutinized, and unfairly so, by international commissions of the UN Human Rights Council. How many more soldiers in the future will find themselves in greater danger because of Goldstone? How many Jewish lives will be lost (and this is not an exaggeration in any way) because of the changes in tactics mandated not so much by his report, but by the fear of another Goldstone Report?
The feathers are long gone. Slander really does kill. And, as a father whose sons will one day serve in the IDF, that gives me real reason to worry.
Posted by Reuven Spolter at 10:45 PM