A Old (and Modern) Pashkevil, and the Dangers of Radio (and iPods)

Over Chanukah, the family took a one-day trip to the Old City of Jerusalem, where the municipality offered self-guided tours for families. For a relatively modest fee we got a guidebook, a jelly doughnut for each of us (at the Marzipan bakery) and admission to three old city sites, as well as a couple of craft projects. There was even a musical performance. It was a really wonderful day; we toured at our own pace, and noticed some things in the Old City that we had taken for granted.
One of the sites that we visited was the Old Yishuv Museum, which, if you've ever been to the Old City, you've passed a hundred times. The museum houses artifacts that try and give you a sense of what life was like for Jews living in the Old City before the creation of the State. I can sum it up for you in two words: Really hard. Small tidbits that stuck with me: The mortality rate for newborns was 80%. Eighty. Women usually split each egg they acquired into four portions. And most people slept on mats on the floor, and a really generous husband would rent one of the six beds in the entire community for his wife to give birth. Like I said: Really hard.
As you walk through the rooms of the museum, you progress through different historical periods, and we came upon an early twentieth century room which displayed the following poster that appeared in the Old City. (Translation follows) 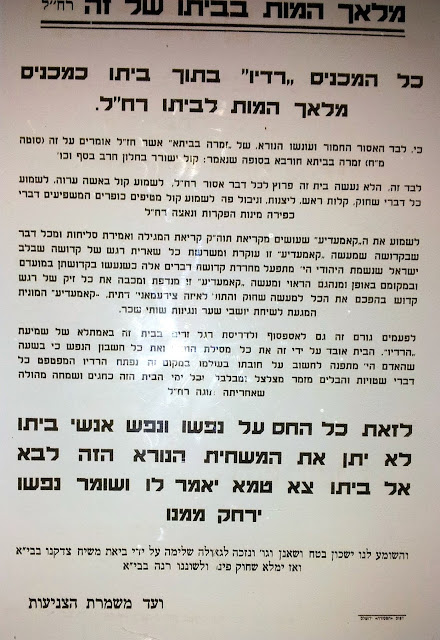 The Angel of Death in This Person's House (Heaven forbid)
Anyone who brings a "Radio" into his house, it is as if he brought the Angel of Death into his home, God forbid.
For, aside from the serious transgression and its terrible punishment, there is also the prohibition of "music in the house", about which our Sages said, the home with music will ultimately be destroyed...
Aside from this, his home becomes wide open for any prohibited matter, God forbid: to hear the nakedness of a woman's voice, to hear matters of scoffing, light-headedness, foolishness, profanity; to hear the voice of apostate preachers who influence with their words of apostasy, heresy, anarchy and abuse, God forbid.
To hear the "comedy" that they make from the reading of the holy Torah and the reading of the Megillah and the recitation of Selichot and from every holy matter, for this "comedy" uproots and weeds out any remnant of holy feeling in the heart of Israel, for the soul of a Jew used to wonder from trembling over the holiness of these matter when they were done in their [proper] holiness, in their time and place in an appropriate and customary manner. And this "comedy" blasphemies and extinguishes any spark of feeling of holiness, by transforming everything into an act of comedy and silliness for any religious ceremony; a mass "comedy:" that approaches the level of the conversation of those who sit in the gates and the melodies of drunks.
Sometimes this also causes the [gathering] of rabble-rousers and strangers in the house with the excuse of [wanting to] hear the "radio". The house loses in this manner the entire framework of life and any self-evaluation, because at the time that a person used to be free to think about his obligations in his world, instead he turns on the radio which chatters foolishness and nothingness - it sings and rings and confuses - and all the days in this home are like holidays and unadulterated joy which then leads to sorry, God forbid.
For this reason, anyone who cares about his soul and the souls of the people of his house will not allow this great destroyer to enter his home. "Leave, impure one!" he should say to it, and one who guards his soul will distance himself from it!

At the museum I couldn't help but think, "The more things change..." Just switch out "radio" for "Television", "Internet", "Cellphones" - and you've got the very same pashkevil you might find on the street today. You don't even have to change the words.
Except one thing did catch my attention, because there's certainly some truth to it. (Actually, there's truth to the whole thing. Any tool is dangerous - radio, telephone - even a pen and paper - depending on how you use it.) I've written before about how I enjoy running with my iPod, and enjoy a number of different podcasts. But I listen not just when I run, but also during my daily commute, when I'm doing housework (dishes, laundry and the like). But, if I'm honest with myself (and I don't think it's just me), sometimes we put on something in the background because we're trying to avoid the quiet. I'm not talking about loneliness; rather, we're trying to avoid forcing ourselves to use the quiet times in our day to do the cheshbon hanefesh - the personal introspection and self-evaluation so critical to spiritual growth.
And, it doesn't matter what's on: Jewish music, news podcast, TV in the background, as long as there's some noise, that's enough to prevent ourselves from thinking. And, sometimes I think that's exactly what I'm trying to avoid.