Should Monetary Considerations Play a Factor in Deciding Whether to Make Aliyah? 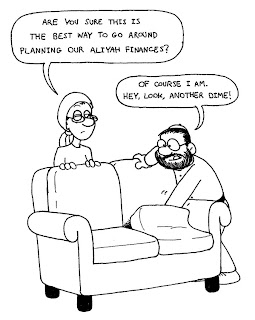 Everyone knows the old joke: "How do you make a million dollars in Israel?" Answer: Come with two million.
Ha. Ha. It's not a funny joke, and actually not really true anymore, at all. But the joke highlights the very real financial concerns that prevent many a potential oleh from realizing the dream of Aliyah. They rightly wonder: should they make the move, irrespective of financial concerns, or should their money-worries play a major role in what is undoubtedly a challenging decision? Netziv, based on the actions of Avraham Avinu, makes a thoughtful suggestion.
Following God's commandment of לך לך, Avraham abandons his homeland for the Promised Land. Yet, according to the Netziv, the journey took place in two distinct stages. The Torah tells us,

Netziv notes the unusual order of the verses. We first read that Avram went – and Lot went with him, and note his age upon departing Haran. Then, in the very next verse, we learn that Avram took Sarai, Lot, and all of their possessions. Is this not at least a partial repetition of the first verse?
To answer these questions, Netziv explains that these two verses describe not one, but two legs of the same journey. And, while we normally translate the phrase, וילך אברם כאשר דבר אליו ה'  to mean, "And Avram went, as God had spoken to him" (meaning that Avram follow God's commandment), Netziv explains the phrase differently, suggesting that the Torah is telling us not what Avram did, but when he did it.

According to Netziv, Avram followed God's commandment immediately, refusing to wait for the sale of his property. Only after he had already left his home did he then slow down enough to wait for his entourage to attend to his affairs, sell his property, and join him on the road.
Yet, Netziv wonders: If Avraham received a direct divine commandment to move, should he not have simply dropped everything and traveled immediately to the Promised Land without delay? Why did he allow himself to be delayed by the mundane matters of his household?

...אחר שהחזיק בדרך וידע שלא יהיה לו מניעה מגוף הליכה שוב ראה לחוש לאבידת הממון וכל היקום - אע"ג שהוא נגד הזריזות לגמר המצוה, מכל מקום גם שמירת נכסים הוא ענין ראוי לחוש...משא"כ בתחלה שהיה משער שאם היה מחעכב בשביל שמירת הנכסים היה יכול להיות מניעה לעיקר הליכה, על כן הוחלט אצלו לצאת תיכף ומיד ויעבור עליו מה. וזה כלל גדול מה שיש ללמוד בדרך המצות.
…Once he established himself on the road, and knew that [monetary matters] would not prevent him from leaving at all, then he saw fit to concern himself with the loss of his money and all of living things – even though this contradicted the value of alacrity in completing a mitzvah, nonetheless maintaining one's property is also a matter of genuine concern…this is not true with regard to the beginning of the journey. He estimated that were he to tarry due to concern for preserving his wealth, this could possibly represent an obstacle to traveling at all. Therefore, he decided to leave immediately, and whatever would happen, would happen. And this is a great rule that we should apply to the fulfillment of the commandments.

Is money an issue when we approach the fulfillment of mitzvot, and especially the challenging mitzvah of Aliyah? It depends. Money worries are indeed real, genuine concerns, and should be considered – even if they delay the fulfillment of the mitzvah. But they cannot be so overriding that they prevent us from fulfilling the mitzvah at all.
So, if you're thinking about Aliyah, and worried about money, first of all, you're not alone. Most Olim, contrary to popular belief, don't have two million dollars in the bank (far, far from it). Financial concerns can and should be part of one's planning when charting the path to aliyah, and, as Avram demonstrated, can even be a legitimate reason to delay the fulfillment of this critical mitzvah.
On the other hand, finances should not and cannot keep us from fulfilling Aliyah, or any other mitzvah. When financial concerns become so great that they're holding us back completely, then we must follow in Avraham's footsteps and, in the words of Netziv, "leave immediately, and whatever happens, happens."
We don't abandon logic and ignore the important factor of money when considering Aliyah. But we can never forget the critical element of faith, and trust that if the Holy One commanded us to fulfill a mitzvah, even if we can't see it, His guiding hand will lead us to success, even when we ourselves cannot see how.