An IDF Ripped From the Pages of Daf Yomi: Mi K'amcha Yisrael! 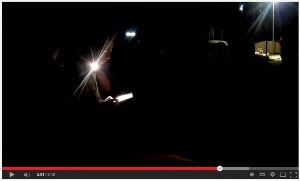 The Gemara in Megillah 3a (which happened to be yesterday's daf), in the midst of a discussion about which is more important - sacrifices or the study of Torah - notes that an angel visited the great prophet Yehoshua in the middle of the night, as he was busy preparing for the war to conquer the Land of Israel, in order to offer his "constructive criticism". The angel tells the prophet,

אמש בטלתם תמיד של בין הערבים ועכשיו בטלתם תלמוד תורה
Yesterday you cancelled the afternoon Tamid offering, and now you're cancelling the study of Torah?
Yehoshua asked him, "Which one did you come for? (i.e. what are you upset about - the sacrifice, or the Torah study?)

The angel answered, "Now I came" (Meaning that he was upset about the lack of Torah study in the camp)
The Gemara tells us,

מיד (יהושע ח, ט) וילן יהושע בלילה ההוא בתוך העמק אמר רבי יוחנן מלמד שלן בעומקה של הלכה
Immediately, "And Joshua laid that night in the midst of the of the valley" - said Rabbi Yochanan: This verse teaches us that he laid in the valley of halachah.

According to the Gemara, Yeshoshua understood that fighting a war isn't an excuse not to study Torah. Rather, we are commanded to do both: fight by day, and study Torah at night. So, after a long day of training and preparation, he spent the night studying Torah.

I couldn't help but think of this Gemara when I came across this incredible article and the accompanying video of an officer in the paratrooper corps (Unit 101), who finished Masechet Taanit yesterday, and wanted to make a siyyum. So, by the light of the soldiers flashlights, he made the siyyum you see here, literally bringing the words of the Gemara to life: Our soldiers fight by day, and lay in the "Valley of Halachah" at night.

Posted by Reuven Spolter at 5:06 PM

Email ThisBlogThis!Share to TwitterShare to FacebookShare to Pinterest
Labels: IDF, Learning in Israel, Life in Israel