How Can You Support Israel During this Difficult Time? Send Me on Vacation! 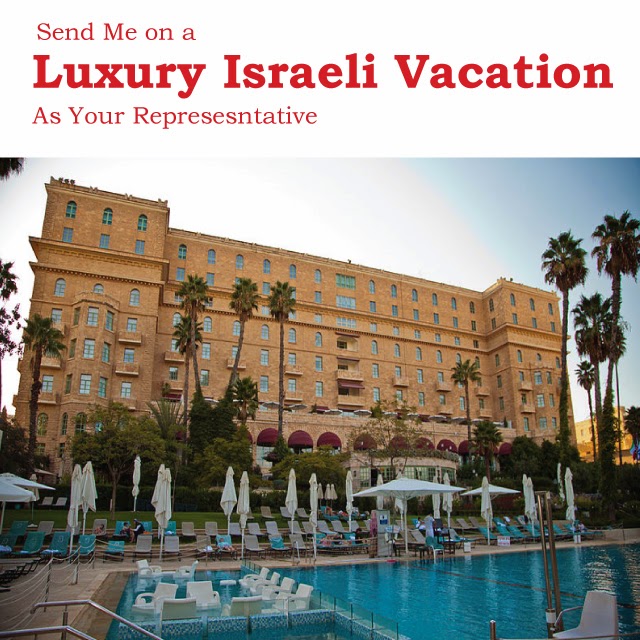 Supporters of Israel around the world, watching the Jewish State get battered by Hamas and bashed by the international community, have wondered: What can I do? How can I help. There are many different ways to help, both personally and financially. I'll mention a few you might already know about, and then suggest one perhaps you haven't considered.

1. Prayer: If you're reading this blog, there's a good chance you already do this. Keep doing it. I also suggest adding Psalm 144 to your list, but take the time to read and understand it. I spoke about it in this shiur, and it gives me a lot of comfort.

2. Political activism: This can take a number of different forms: (a) Participating in rallies (b) Writing letters to the editor, and supporting Israel in the media (c) Communicating with an elected official. I want to emphasize this point.
Over the past few weeks, we've seen the important role that Congress plays in supporting Israel's right to self-defense. Without the Congressional counter-balance to the pressure that has been brought to bear upon Israel to stop fighting, we'd be right back where we started, and Hamas would already be rebuilding tunnels with concrete supplied by the United Nations. Did you notice that Congress passed a number of resolutions supporting Israel's right to fight over the past few weeks? It cannot be coincidental that the FAA reversed its decision to halt American flights to Tel Aviv after a prominent Senator began asking pointed questions. And the money to pay for those expensive Iron Dome rockets helps a great deal.
I was involved with AIPAC when I was a rabbi, and continue to support AIPAC's work even from Israel. This is the very best time to get involved with AIPAC. Congressional elections take place later this year. Prominent supporters of Israel, including great friend of Israel Senator Carl Levin - who is retiring - will be fighting for their seats. Michiganders: Who will take Levin's place? Will he or she be as supportive of a strong US-Israel relationship as Levin is (hard to believe, truthfully, as Levin was as supportive as they come...) That really depends: Who's working for the candidate that will take his seat? Who's canvassing for votes, and working the phones? Who's writing the checks to support the campaign? It really is as simple as that. The people who get involved early have access later on.
It's not about supporting a candidate you don't believe in. Rather, it's about getting involved in the political process, and supporting someone you really do support, so that the friendship you create now can have a lasting impact down the road.

3. Send me on Vacation for You: All of this prayer and activism is fine and good, but you need to make a real difference right now. How best to do that? Send food to the soldiers? Already been done, and besides, the IDF insists that it's sending enough food to the soldiers already. (I know a guy who runs a food service company here in Israel supplying tens of thousands of meals a day.) Buy soldiers cell chargers? Again a good idea. But all the good IDF ideas have already been tapped out. How much Bamba can a poor private consume? How many pairs of dry-fit tzitiziot can a soldier wear?

What people may not realize Israel's economy, and specifically the tourist industry, has suffered badly during the war. People simply stopped coming, taking trips, cab rides, eating in restaurants, etc. This is, of course understandable, and it's also quite challenging for people who want to support Israel, who can't simply leave their homes, jobs and families and take a trip to the Holy Land.
The Solution? I will take your vacation for you!
I've taken the liberty of setting up an Indiegogo campaign to raise money for the express purpose of bolstering the Israeli economy. Over a two week period I (and my family) will:


These activities will provide vital support for the tourism industry in Israel, so badly battered by the continuing war in Israel. They need our support, and by teaming together (your support and my willingness to take a vacation in your place), together we can do our part to help those in Israel who are in need today!
So visit my campaign and join me in doing our part to help Israel win this war!

Small print: Donations are not tax deductible. They also don't count as ma'aser. Or tzedakah.

Posted by Reuven Spolter at 2:11 PM