I've noticed a bit of an uptick in social media regarding the use of Shemittah fruit for the Four Minim this year (since the fruit in Israel are Shemttah). I strongly encourage that my chu"l friends make a point of purchasing Israeli produce through the Otzar Beit Din system, thereby supporting Israeli farmers who are having a difficult enough time getting through Shemittah. (See Rabbi Daneil Korobkin's letter here.)
Here in Israel, the point is moot: all the fruit here is Kedushat Sheviit.
But this year, my etrog is really Kedushat Sheviit. I know this because I picked it myself.
Yesterday morning, I was running in the fields near Beit Chilkiyah (which is a Chareidi argricultural yishuv right next door to Yad Binyamin), and I noticed that a gate which is normally closed was instead open). So I took a look, and found myself in an Etrog tree orchard open to the public for Shemittah. The trees grew in such a way that they formed a canopy over you, so as I walked down the road it felt like I was walking in an enclosed Etrog forest. Better still, the owners of the fields who are meticulously observing Shemittah left clippers for visitors to cut Etrogim, asking only that we take care not to harm the trees.
I didn't have anything to carry etrogim with me, and I wanted to share the experience with the family, so I brought Rena, Leah and Moriyah with me back to the field later in the day. Here are some pictures.
While someone told me that we got there very late in the season, I managed to find a really lovely etrog that I will use on Sukkot. To me, there's nothing more hadar - beautiful, than using an etrog of shemittah that I merited to pick myself in the field five minutes from my home. 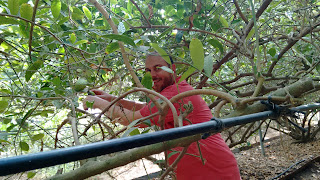 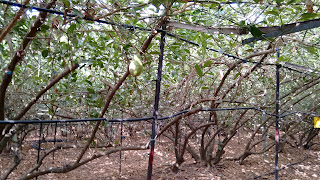 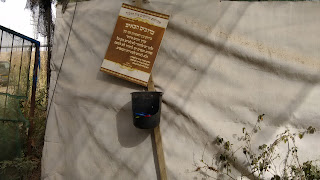 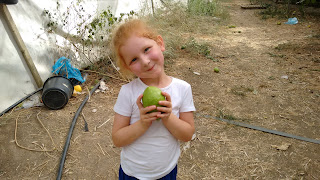 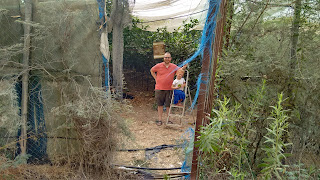 Posted by Reuven Spolter at 9:57 PM