Lessons from the Daf: Just Because I Have a Sevara Doesn't Give Me License to Paskin 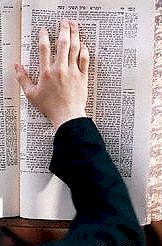 Rav Yochanan's comment is more striking in Aramaic: וכי מפני שאנו מדמין נעשה מעשה - "Because we imagine (or think) something to be so, should be act upon it? Commenting on this strange phrase Rashi writes, נראה בעינינו וכמדומין אנו כן ולא שמענו מרבינו - "It seems to be correct in our eyes, but we did not hear it from our rabbis." Rav Yochanan even rejects a clear proof text to his legal theory, suggesting that it might not be a normative opinion.

The story represents a fascinating tension between theoretical interpretation of a text and actual implementation. Rav Yochanan teaches us that while learning in the Beit Midrash must be honest and open, translating that theory into action requires great care and precision. You don't make changes without the approval and instruction of your rabbis.

To me, this message seems especially relevant in the halachic climate in which we live today.

Posted by Reuven Spolter at 5:20 PM

Email ThisBlogThis!Share to TwitterShare to FacebookShare to Pinterest
Labels: Halachah