Calendar Confusion: Why Will it Take So Long for Chutz L'aretz to "Catch Up" with Israel This Year?

I received a fascinating question from good friend and former congregant Jeffrey Schlussel that stumped me. So, I shared it with a Hebrew rabbinic email list that I follow and received a great answer in the form of an article by Israeli scholar Rabbi Dr. Chaim Simons in the Hebrew-language journal Sinai. I would like to share the question and then present as clearly as I can Dr. Simons' answer.


I’m writing because I have a question that bothered me last year and will bother me again this year. Maybe you can help provide an explanation (although it has little bearing on you).
Because of the second Yom Sheni this year in chutz la’aretz, Israel’s torah reading will be Acharei on the same day as the 8th day torah reading for the diaspora. What bothers me is that it would seem logical given the fluidity of Jews these days travelling to and from Israel, we would want to make sure the entire Jewish world reads the same weekly parsha as quickly as possible. It would then make sense that the following Shabbat the diaspora reads Acharei-Kedoshim so we are back in unison within a week. But that is not the case. In fact, it is only until Matot-Masei, which is nearly two months later, that we are back in-line with Israel. Why? I can’t seem to find any justification. The delay ultimately deprives those coming to Israel of a parsha and forces those coming from Israel to repeat a parsha.
Do you have any thoughts? I would love to hear them.

Just to highlight Jeff's question, it helps to frame it in terms of last year, when the same thing (Eighth day of Pesach fell on a Shabbat) happened. Here's last year's calendar from Israel (all charts are screenshots from the incredibly useful Hebcal.com calendar tool. Highly recommended.) 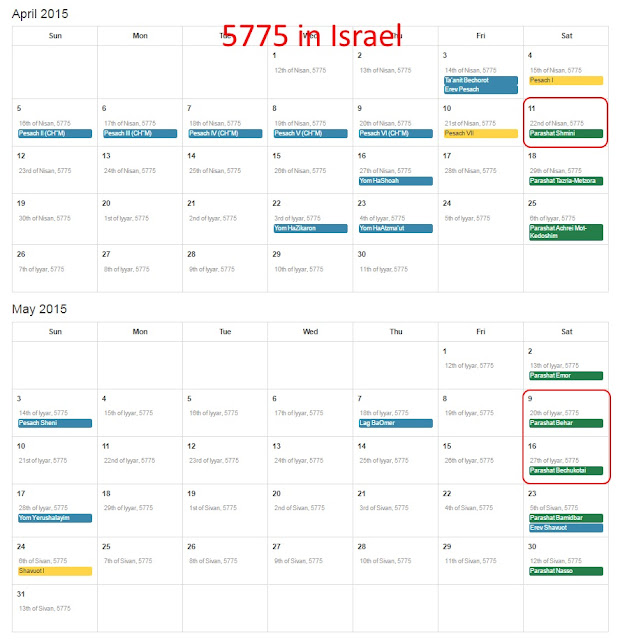 You can see from this calendar that last year in Israel when Pesach ended on Friday (and we immediately read Parashat Shemini, we also split Behar and Bechukotai. Notice that by the Shabbat before Shavuot, we read Parashat Bamidbar - this is important, and we'll come back to it later. Meanwhile, in the Diaspora, they couldn't read Shimini until the next week, on April 18th... 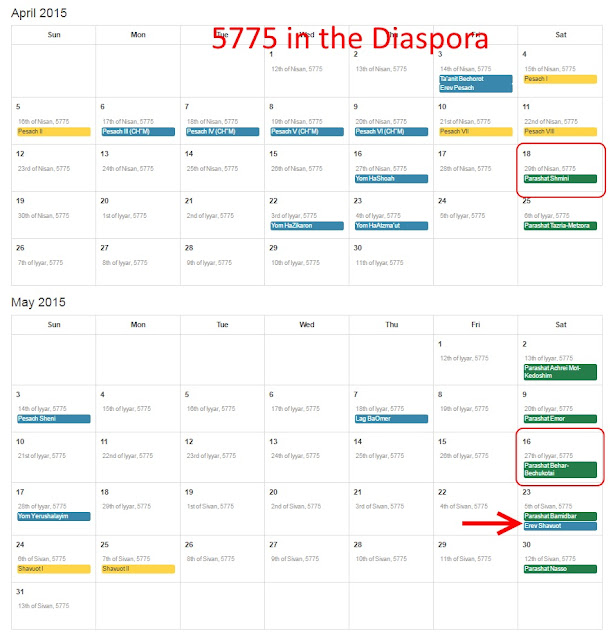 But last year in the Diaspora, communities combined Behar and Bechukotai thus allowing galut Jewry to "catch up" by Bamidbar which was read in communities around the world on May 23rd.

Fast forward to this year:
Again this year, the last day of Pesach (in Israel) falls out on a Friday, and we immediately read Parashat Achrei Mot. Since we're a Parashah "ahead", there's no reason for us to "combine" a parshah. That's up to the Diaspora, who at some point need to combine Parshiot in order to "catch up." Remember that last year you did it in Behar-Bechukotai... 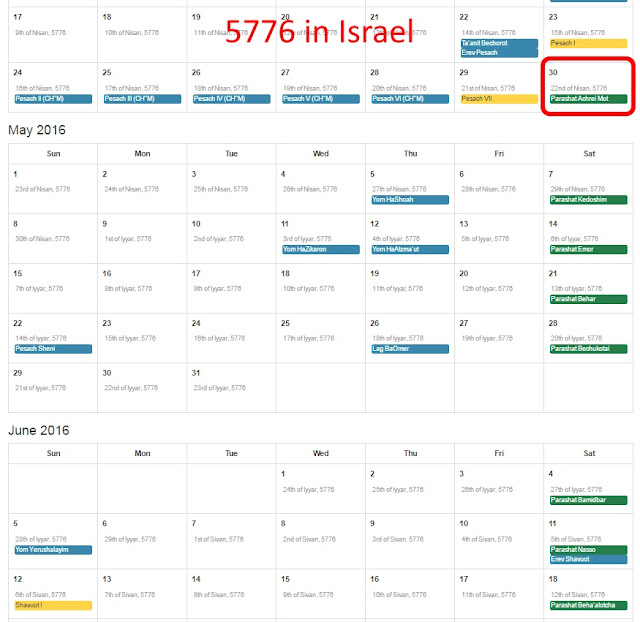 But when we look at the calendar this year, you immediately notice that this "catching up" doesn't take place until two months later in Matot-Masei! Why the long wait?

That's basically Jeff's question in a nutshell. And it's a great question.

Before the Answer: A Few Basic Principles
The answer lies in understanding a few basic rules that guided the division of the parshiot according to the calendar. Again, all of this comes from a short article by Rabbi Dr. Chaim Simons which appeared in the Israeli journal Sinai (volume 36 pp. 33-40). You can find a link to the article here.

First of all, Dr. Simons suggests that evidence indicates that until the 13th century, in Israel the reading of the Torah remained on the three-year cycle. He seems to make this suggestion based on the fact that the halachic literature doesn't discuss the issue of dealing with the calendar until the 1300's. In any case, it is clear that during these centuries, the calendar was far from set, and historical evidence indicates that different communities (and later the entire city of Safed) had various customs as to which parshiot to split (on a non-leap year) in order to account for the "extra" week (just like we "split" Behar and Bechukotai. It even happened that within the city itself different congregations read different parshiot on the same week! (Truth be told, when you think about it, this is not all that surprising.)

In addition, the Gemara in Megillah (31b) writes that Ezra HaSofer decreed that communities should finish reading the Parshiot which contained the Tochecha before the conclusion of the New Year.

This is so that "The year and her curses should end" before the entrance of the New Year. This applies both to concluding Ki Tavo (with the long Tochecha) before Rosh Hashanah, and also to finishing Bechukotai (with the short Tochecha) before Shavuot. The Baalei HaTosfot note that in their communities, they never read Bechukotai before Shavuot nor Ki Tavo before Rosh Hashanah. Rather, they always read those parshiot at least a week beforehand.

The Baalei Tosfot explain that by design, we read a parshah after the "Rebukes" in order to specifically distance ourselves from the "curses" of the Tochecha. Yet, we don't want too much distance - one week is just enough to make the point that we're connecting the Tochecha to the "New Year" of Shavout, but keeping our distance. This means that ideally, we should read Parshat Bamidbar on the week before Shavout.

With these guiding principles in mind, we can now understand the difference between last year and this year, and why the Diaspora will wait so long in order to "catch up."

Leap Year vs. Non-Leap Year
Essentially, the major difference between last year and this year is that last year was a "regular" - non-leap year, and this year was a "leap" year, in which we added an extra month of Adar II in order to stretch the calendar into the springtime. During a "normal" year, a number of parshiot in Vayikra are combined together. Look back at the 5775 calendars above. In Israel, with the addition of the Shabbat of Shemini after Pesach, had the calendar kept all of the normal readings combined (and not separated Behar and Bechukotai), we would have ended up reading Parshat Naso before Shavuot, and been too far ahead of Shavuot. So, the calendar combined Behar and Bechukotai in order to have Bamidbar fall on the Shabbat before Shavout. While to the layperson it might look like it's designed in order to allow the Diaspora to "catch up", that's only a convenient coincidence. Rabbi Yissachar ben Mordechai Ibn Sussan, a 15th century Sefardic posek, wrote in his "Tikkun Yissachar" that it would be inappropriate for communities in Israel to combine Parshiot for the sake of Diaspora Jewry. The community in Israel is the "ikkar" and follows the essential law of keeping only one day of Yom Tov. So he had no interest in changing the reading in Israel to "help" our brothers in the Diaspora. In other words Israel, we do what we do. If you want to "catch up" to us, do whatever you have to do...but don't expect us to help you. So last year, basically the Diaspora got lucky, and things worked out nicely leaving a "split" for a relatively short period of time.

What About 5776?
This year was a leap year, so the Vayikra parshiot are essentially separated to account for the extra month. In order to catch up, the Diaspora, which has an extra week, needs at some point to combine two parshiot. When should they do it? Looking back at the 5776 Diaspora calendar above, notice that without combining any parshiot in the weeks after Pesach, on the Shabbat before Shavuot you read Parshat Bamidbar. Perfect! Just as the Ba'alei HaTosfot advocated. So no parshiot were combined before Shavuot.

What about after Shavuot? Why do you wait until Matot-Masei, and not pick an earlier date to combine? It turns out that the parshiot are combined not in the interest of global unity, but again for a different reason entirely: we want to read Parshat Devarim (with it's mournful Eichah lament of Moshe) on the week before Tisha B'av, and Va'etchanan immediately afterward. In order to do this in Israel, we must divide Matot and Masei into two weeks. In the Diaspora they leave Matot and Masei together in order to achieve the same result, thus "rejoining" with Israel. Interestingly, Dr. Simons adds that while the Tikkun Yissachar accepted this approach, he does note that R' Saadia Dayyan Tzova (from the Syrian city of Aleppo) wrote that in their community, they combined Korach and Chukkat together, and kept Matot-Masei split, apparently in order to "rejoin" with Israel which was only 250 miles away!

According to this understanding, having the different communities in Israel and the Diaspora was never really a halachic concern at all. Intuitively this makes sense. Travel between countries was dangerous and relatively rare, and communication was slow. What difference did it make whether the communities read the same Sedra on the same week?

Today, with instant global communication and regular, safe travel between Israel and the Diaspora, it would of course make sense for the Diaspora community to make a greater effort to "catch up" to Israel. (In Israel, there's really nothing we can do, and Israel would never change for the sake of the Diaspora anyway.) Since the layout of the parshiot is completely based on custom, and apparently quite fungible, it would be fascinating to revisit the suggestion of the Tikkun Yissachar, and suggest combining Korach and Chukkat instead of Matot and Masei, to minimize the split between the communities.

Yet, that only begs the question. Who would you ask? Who could make a decision to change the custom which would be universally acceptable to all of Diaspora Jewry? What would ensure, I imagine, would instead be a scenario in which communities within the Diaspora would then accept different customs - the more "Zionist" communities combining earlier, to better unite with the Jewish State, which the more conservative communities would insist on maintaining minhag hamakom, preferring to merge later on in the summer. Thus, we'd be back to the situation in 14th century Safed, where the parshah being read depended on the shul you attended, bringing us back full-circle - to the way things have always been.

Posted by Reuven Spolter at 2:10 PM