Where Are the Women? In Haredi Comics, Women are Nowhere to be Found

This past Shabbat, my daughter discovered a book that had been sitting in our library for a while. "A Yiddishe Kop" is a very popular puzzle book, which asks the reader to look at beautifully illustrated pictures and decipher puzzles hidden throughout the book. My daughter spent hours poring over the pictures trying to find clues and answers to the very clever questions, and asked me at one point to help her. The author, Gadi Pollack, is a talented illustrator, and the pictures jump off the page.

I've seen the book before, and enjoyed some of the sharp puzzles. But this time, as I sat next to my seven-year-old, one question jumped out at me from each and every page: Where are the women? In the vast majority of instances, they are nowhere to be found. Here's a sample page I found on the web: 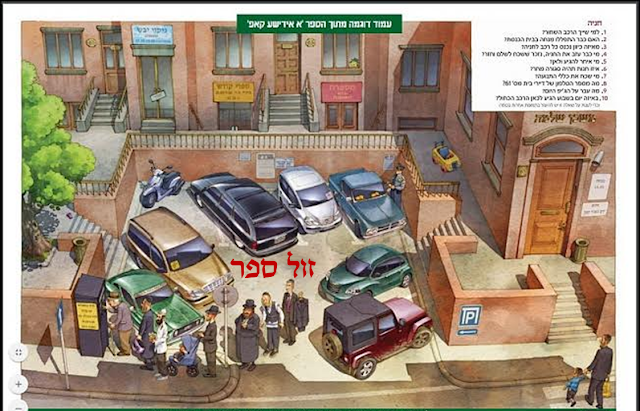 No women on the street, perhaps. But the book has a large number of scenes. I get that there are no women in shul or cheder. But no women at the doctor's office? No women at home? The clever way he gets out of that one is by creating a scene where the mother has just given birth, so the hapless father is stuck in kitchen. There is a woman at the zoo, but you can barely see her hidden in the golf cart. (I can only imagine a zoo where they let patrons drive around in goft carts!)

Pollack just released the second volume of the series (which I learned is also avaiable in English). Here's the sample page: 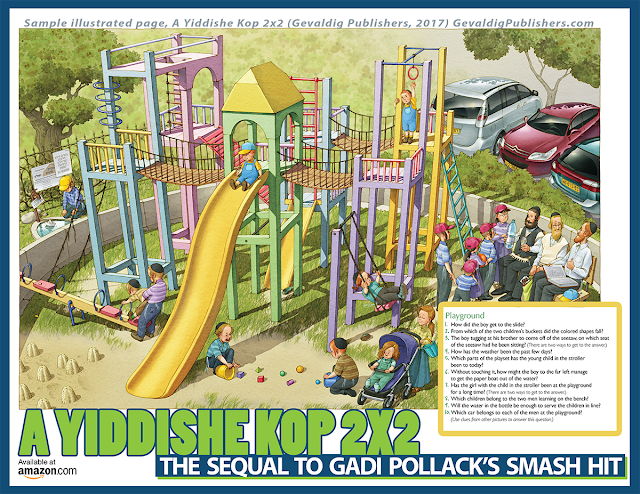 Again, boys, girls and men. But no women! In the park! In America! (They do not have minivans like those in Haredi communities in Israel.) What happened to the women?

I'm not entirely sure why Pollack feels the need to erase the women from his illustrations. After all, he can draw them as modestly as he liked, in wigs, snoods, however he sees fit. Does he really feel that mere drawings of women will hurt sales of the book?

Modern families must fight back. They must go to their bookstores and tell the owners that they won't buy books, clever as they may be, that erase women from every possible situation. They must send the clear message that until women are portrayed properly, they won't expose their children to this type of media.

Until they do that, the media in which women are absent will continue to expand.

Posted by Reuven Spolter at 1:31 PM