Right-Wing Reactionism: Why Can't We Be Civil? 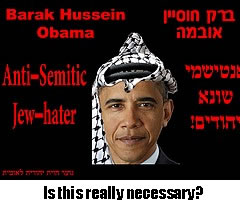 It's hard to be a right-winger nowadays.
Yes, I find the recent pressure that the Obama administration has been putting on Israel very upsetting. If you've been reading this blog, you'll know that I think that lumping all settlements together denies realities on the ground. You cannot compare huge cities with thousands of residents to trailer parks surrounding a mound of dirt. And I really don't agree with the notion that Israel has to make concessions while the Palestinians sits idly by waiting for Obama to pressure Bibi to hand over the keys to the kingdom.
But right-wingers are just nuts.
Yesterday I noticed on Hirhurim an ad for a protest that was to take place in Yerushalayim yesterday afternoon. It just so happens that we were planning on being in town to meet someone for dinner anyway, so for a brief moment, Rena and I considered bringing the kids to the protest. I'm really glad that we didn't, especially after I saw the article about the protest i the Jerusalem Post.
I certainly respect and agree with the opinion of Rabbi Shalom Gold, who said,

"Mr. Obama, we started demonstrating 16 years ago," said Rabbi Shalom Gold, the founder of Kehillat Zichron Ya'acov in Jerusalem's Har Nof neighborhood, alluding to the early days of the Oslo Accords. "You were in your '30s and you probably didn't know the first thing about Eretz Yisrael... but we're part of God's divine plan, we're here and we're staying here!"

But the protest itself, and the imagery portaying Obama as anti-semitic and anti-Israel, are just over the top.

The Jewish National Front, which is backing the protests, said in a statement: "We decided to launch a campaign against the president of the United States and to say that Barack Hussein Obama is bad for the Jews."
"From the moment that he entered the White House, we have been feeling anti-Semitism and hatred toward Israel."

Really now? Anti-semitism? Do you know how many Jews serve in Obama's administration? You might not like or agree with Rahm Emanuel. But he's pretty Jewish. Very Jewish. Oh, and hatred towards Israel? Every time someone says something you don't like, all of the sudden he's a Jew-and-Israel-Hater?
And then I read this article, about people sending hate mail to officers of the IDF.
These types of displays do nothing for those who seriously disagree with the change in American policy. They allow those who disagree with us to deligitimize us as "crazies" who will stop at nothing to achieve their goals. They feed into the worst stereotypes of "settler youth" and right-wing activists. And if they don't stop their hateful and bigoted rhetoric, they'll soon find that they themselves their own worst enemies.
Just to be clear: Mr. Obama, I believe that you are a friend of Israel, and abhor those who would call you anti-Semitic. I thank you for your support of Israel, and respect your desire to promote goodwill throughout the Middle East. I also find your desire for even-handedness and honesty refreshing.
In that spirit, I invite you to see the truth about the settlements you demand halt all construction. While our Arab neighbors certainly don't like them, they are not the obstacle to peace. Until all moderate Arab nations overcome their instinctive hatred of Israel and accept our right to be here, in God's promised land permanently, speaking of peace deals, concessions and the like seems incredibly naive. Furthermore, your view of Arab demands and expectations seems especially shortsighted from this side of the Atlantic Ocean.
Is it really so hard to disagree with civility?