I just got the bill for my son's new yeshiva - which includes full dorm. The price? 18,000 shekel for the year.
I know what you're thinking in the United States: 18,000...divided by about 4...that's 4,500 dollars for the year! What a deal! And it includes full dorm? What are you complaining about?
First of all, I'm not complaining. OK, I am. But also realize that salaries are far lower here than they are in America. And it's not only me. The entire Religious Zionist sector is complaining. And it's gotten quite political, which means that something might actually happen.
Check out this article from the Israeli website Kipa, which is one of the primary websites for the Religious Zionist community. In it, the head of Bayit Hayehudi, Rabbi Dr. Daniel Hershkovitz, is quoted as refusing to vote for the cuts to the Israeli budget (which aslo include a small tax hike), unless the government does something about the astronomical price of Religious Zionist education.


Yeah! Right! You go Rabbi Dr. Hershkowitz!
What's really going on here?
First and foremost, what we're dealing with here is politics. The Bayit Hayehudi is in the middle of its first-ever primaries (although I have no idea when the elections are - I think early September), and candidates are falling all over themselves to demonstrate how they're the best choice to lead the Religious Zionist community. I don't know if you clicked on the link to the articel, but let me share with you what the screen actually looked like when I read it. (You need to click on the image to see it full size with my comments). 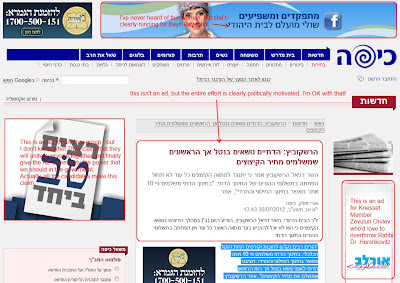 Hershkowitz is clearly trying to gain favor with his constituency with an issue that's near and dear to most of our hearts: the high cost of education. And he's got my attention. Truth be told, if he gets the government to kick in some money, I'll vote for him too.
Moreover, I take some comfort in the fact that there is actually a chance that something might happen, and that tuitions might go down somewhat, because the issue is political. In America, despite the insistence that Jews must get more involved in local politics as a means to help address the crushing burden of day school tuition, I can't really see that making much of a difference. There's no appetite for vouchers pretty much anywhere in America, and with budgets as tight as they are, what politician (other than one in Brooklyn or New Square) would vote to give a slice of that budget to private schools? But here, everyone fights for their piece of the pie. So, if Hershkovitz is willing to fight hard enough, he might just get somewhere. In fact, Ha'aretz is now reporting that the Prime Minister has already promised to do something about the payments in response to Hershkovitz's threats. Great for us.
But his comments raise a much broader issue. He's really right. For ages, the RZ community waffled between trying to do what's best for everyone, and worrying about our own needs. Not so Chareidim who willingly sold their votes to fund their yeshivot. (If you're wondering why they get such great subsidies, that's why.)
We pay more for the simple reason that we want more out of our kids' education. The secular want excellent secular studies. They don't need or want 24 hours of class per week on religious education. The Chareidim want and pay for Torah, but pretty much could care less about secular education. We want both. We insist on both. So, should we really be that surprised when it costs more money?
But do we really want to be yet another group that grovels in the Knesset for our slice of the pie? I guess, right now, the answer is yes. But that groveling comes at a price. In essence, we've got to ask ourselves: what are we willing to give up? What's our price? It's easy to refuse to vote for a budget that's going to pass anyway. But when push comes to shove, and the Prime Minister is counting votes for a controversial issue (kicking people out of their homes, perhaps), will we be willing to sacrafice those people, and that Land, at the Altar of Cheaper Education?
Is that really who we want to be?
Posted by Reuven Spolter at 5:00 PM