My good friend Rabbi Asher Lopatin, has recently been appointed as the new head of Yeshivat Chovevei Torah. Rabbi Lopatin is a brilliant, eminently talented and devoted rabbi, and I have great confidence that he will lead YCT capably and expertly.
What are his goals as he begins his tenure beginning next June? Rabbi Lopatin told the Times of Israel that,

he wants to maintain the school’s outreach-oriented approach, but one of his first priorities will be gaining broader acceptance within the Orthodox camp.
“I want to make sure Chovevei Torah is an integral part of the Orthodox world,” Lopatin told JTA. “I do think there’s a perception that Chovevei is left, for liberal Orthodoxy,” he said. “I want to start with getting the word out that we’re open to right and left.”

Will Rabbi Lopatin succeed in gaining broader acceptance within Orthodoxy? Will he finally convince the RCA to accept YCT semichah - something Avi Weiss could not accomplish? I have my doubts. One need only read the occasional outbursts appearing in the Chareidi press when one of YCT's graduates does or writes something that they feel crosses one red line or another. (see here for example).
And yet, I've been noticing some recent developments that I directly contribute to the growth and maturation of YCT. To be specific, with a new left-wing target, the right has begrudgingly begun to accept Yeshiva University, and especially RIETS.
I offer one piece of evidence. As a graduate of the Yeshiva of Greater Washington, I recently received the following email: 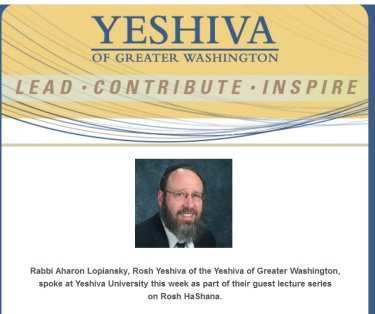 If you can't read it, "Rabbi Aharon Lopiansky, Rosh Yeshiva of the Yeshiva of Greater Washington, spoke at Yeshiva University this week as part of their guest lecture series on Rosh HaShana." You can access the shiur here.
What? Really? Did I read that right? The Rosh Yeshiva of the Yeshiva of Greater Washington spoke at YU? That, in and of itself is news, even though YGW really isn't all that right-wing (although it pretends to be). Most shocking is that YGW actually publicized the fact that its rosh yeshiva spoke at YU.
This isn't begrudging willingness to speak. It's outright acceptance.
I am one of probably hundreds of YGW graduates that has attended YU, proudly so. But I never really felt that the Yeshiva administration really wanted us to go to YU. They knew we were going, but if they had their druthers, they would have much preferred that we attend Ner Yisroel, or if they really did their job right, a right-wing yeshiva with no college program. So, I truly found the email surprising. (Just to add a delicious twist of irony, does anyone want to guess where Rabbi Dov Linzer, Rosh Yeshiva of YCT went to high school? That's right: the Yeshiva of Greater Washington. Actually, back then it was just the Yeshiva High School, but who's counting. I have vivid memories of a summer shiur that Rabbi Linzer gave at the yeshiva to a bunch of guys at night.)
So, the email is either a mistake, or it represents a shift in attitude towards YU - which I think is the case. Why the shift? What suddenly has made YU more palpable to the semi-chareidi public? Without a doubt, the Roshei Yeshiva at YU have appropriately garnered a significant amount of respect owing to the fact that they're world-class talmidei chachamim. But it's gotta be more than that? YU has always boasted incredible rabbinic leadership? What's changed recently?
The answer, I believe, is YCT.
With an institution like YCT occupying the left wing of Orthodoxy, YU now fills that space somewhere in the middle, and the ground between it and the center-right institutions like Ner Yisroel and YGW has become that much smaller.
Which is a good thing, because the Orthodox world needs more unity and mutual acceptance, and not less, and the more integrated YU and the rest of the frum world grow, the greater work they will be able to do on behalf of the Jewish people.
Posted by Reuven Spolter at 6:00 PM