The View from Here: On Iran, Rosh Hashanah, and What We Can Do About It 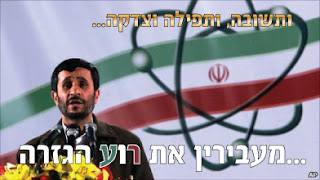 This might sound strange to the average American, but I’m not entirely sure that we know or feel the situation in Iran any more than you do. With instant global communications, we’re reading the same websites and watching the same news. I daresay that in America, the Jewish community might be more aware of the Israel-Iran issue, and more frightened. Of course Iran comes up on the news here. But there’s also other local news that doesn’t make it to the English-language press. Try the following experiment: check out the English version of Ynet, and then the Hebrew version. The English version almost always deals with security issues; the Hebrew one almost always leads with local Israeli news. I just tried it now. English site headline: “Panetta: US has only 1 year to stop Iran.” The lead story on the very same site, but in Hebrew? “White House: Obama has no time in his Schedule for Netanyahu.”
That’s not to say that Iran isn’t a concern; of course it is. But like Jews do around the world, we here live our daily lives, worried about the normal things that occupy our time: our jobs, the economy, getting the kids to sleep and the laundry done. At least for now, we’re not talking about an imminent threat; we’re discussing whether Israel should take action to prevent Iran from becoming an imminent threat.
So, at least personally, I don’t really walk around worrying about Iran. I certainly don’t walk around carrying a gas mask. I walk around worrying about gas prices.

What, then, can and should the American Jewish community be doing about the Iran threat? I have two thoughts.
As we all know, when Yaakov Avinu prepared to face Eisav, he did so in three ways: he sent gifts to Eisav; he split the camp preparing for a fight, and he prayed. In other words, he prepared to fight; he engaged in diplomacy (the gifts), and he turned to the רבונו של עולם.
In my view, the American Jewish community can and must play a role in each of these critical areas:
One final point: the Gemara in Brachot (4a) wonders: if God had promised Yaakov והנה אנכי עמך ושמרתיך בכל אשר תלך – why was Yaakov so afraid of Eisav? After all, he had God on his side! The Gemara answers that Yaakov never doubted God’s ability to protect him. Yet, אמר, שמא יגרום החטא – “he said, perhaps the sins that I have committed will cause [me to lose God’s protection].”
In the end, we place our trust in the Master of the Universe. Yet, will we merit God’s divine protection? That’s really up to each and every one of us. Each of us has the power to raise the merit of the Jewish people, or, God forbid, lower it. Whether we value that power and take measures to protect and cherish it is up to us.
Posted by Reuven Spolter at 11:21 AM