A Tiny Symbol of Resistance in the Lodz Ghetto: Cholent

I'm finding Yom Hashoah rather challenging this year. I'm not sure why. I just heard a fascinating talk given by a representative of Machon Shem Olam (which catalogs different forms of religious and spiritual resistance that took place during the Holocaust), and it seems appropriate to share one small example that the speaker shared.
This photograph, at face value, seems unremarkable. 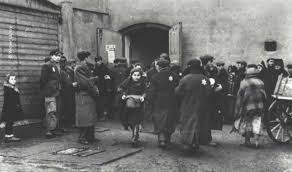 It seems to portray a child emerging from a food distribution center. People stand in line, seemingly waiting to get in. And if you look carefully, you can see a Jewish policeman (with the armband) trying to keep order, perhaps.
Yet, historical records do not show that there were any food distribution centers of this type. People went to soup kitchens for meals, but never went home with full pots of food.
Rather, documentation (that he showed us) clearly indicates that this picture is a depiction of an age-old Jewish practice. For centuries, Jews who wanted warm food on Shabbat morning, would leave their cholent pots in the over at the bakery on Friday afternoon, and pick up their food on Shabbat morning. They continued to do so in the misery of the Lodz Ghetto; when food was as valuable a commodity as could be had, Jews still, to whatever degree was possible, observed the prohibition against cooking on Shabbat, risking the possibility that their food might be "stolen" by someone else when out of sight.
Posted by Reuven Spolter at 12:26 PM