Chareidim seem to be in something of a pickle. On the one hand, they declare total allegiance to Gedolim, whose word represents the will of the Torah and cannot be contradicted. Personally, I don't subscribe to such an extreme version of what is called "Da'as Torah", but that's me. (And probably you, if you're reading this blog).
This would all be fine and good if people knew what the Gedolim actually said. But as the great sages advance in age, they simply cannot handle the ever growing demands for their time and attention. Ironically, the older and more physically frail they become, the greater their stature - and the demands of the masses on their time, energy and attention, for blessings, halachic questions and queries about issues of the day.
Thus, these Gedolim are forced to withdraw to a large degree, shielded by a small cadre of "askanim" who field questions, limit access, and filter the unending demands on their time and dwindling energy. This makes sense to me, at least. Major public figures need staffs to handle their affairs. Why shouldn't a Gadol, especially since he probably wants, more than anything else, to learn Torah uninterrupted?
Yet, this lack of access creates an inherent vacuum. How can one follow the word of a Gadol on an issue if he doesn't know what the Gadol actually said?
This has led, inevitably, to a growing phenomenon of Gedolim forgeries - two examples of which we've seen this past week.
Last Sunday, Chassidim held a rally in Manhattan to protest pending legislation in Israel that seeks to draft Chareidim inTO the IDF. Suffice it to say that had I been in New York at the time, I would not have attended. But what's a Litvishe Chareidi to do? Did the Gedolim say do go or not?

At the last minute, someone released a letter in the name of Rav Chaim Kanievsky in which he blessed the proceedings and encouraged people to attend. It turns out that this letter was a forgery, and Rav Kanievsky wrote no such letter. It's hard to know how many people attended due to the letter - yet it clearly created a sense of confusion among Chareidim who didn't know how to react. They are, of course, against the legislation. But is protesting in Manhattan the proper way to react? Would it not be better to remain in yeshiva and learn Torah in protest? That's why you have gedolim - to answer these questions. Unless you don't know what the Gadol actually said. 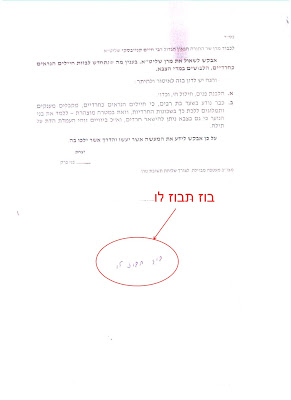 I noticed a similar example published on a small Chareidi web site (There seem to be an awful lot of these sites, especially since the Gedolim have expressly forbidden internet use. Interesting.) The site shares a letter in which an individual from Bnei Brak asked Rav Kanievsky whether it's appropriate to publicly shame IDF soldiers who look Chareidi (the question itself is fascinating, but not the topic of this post). At the bottom of the letter seems to be a brief answer in Rav Kanievsky's handwriting in the affirmative, and was actually reported as such by a major Chareidi website. (Actually, he seems to write in Hebrew, בוז תבוז לו - "he would be utterly condemned". It might have been quite a clever quote from Song of Songs 8:7 - if Rav Kanievsky had written the line. But it's a misquote. The actual verse is בוז יבוזו לו. He would never have made such an error in an explicit verse.) Yet, the article explains that,

So, Rav Kaneivsky never expressed an opinion about the issue at all. Or so it seems. In fact, he never expresses opinions in writing about public issues anymore, or so they say. Who then does a Chareidi believe if he wants to know Rav Kanievsky's position on a particular issue? How can one believe anything said - or even signed by - a Gadol, if people within the Chareidi community are now willing to forge letters in their names?
Posted by Reuven Spolter at 9:16 AM