Is Your Tuition Going Down? I'm Still Waiting.

While in America you've heard stories about free day school tuition in Israel - that's true basically for elementary school. (OK - it's a few hundred shekel per kid a year, which isn't nothing. But after shelling out thousands, a few hundred shekel seems manageable.) The wheels fall off the bus when you get to high school, which can cost anywhere from 10,000 shekel a year for normal school with no dorm, up to anywhere from 18,000 to 25,000 shekel per year for full dorm. (Again, I know what you Americans are thinking. But remember that we're paid in shekels as well.) This is such a critical issue, that many of us voted specifically for the Bayit Hayehudi over this issue. Actually, I can't speak for anyone else. I voted for them over this issue.
Well, "Mission Accomplished!" Thanks to the Bayit Hayehudi, our tuition has decreased! Hooray! At least that's what they're telling me. After all, early in the summer, they declared that they had succeeded in reducing day school tuition by forty (40!) percent! This was hailed as a "historic accomplishment" by Naftali Bennett, who lauded the achievement by saying, "We made a promise, and we kept it."
Today, the back of B'sheva (the free newspaper given out to us Religious Zionist folks all over the country) had a full-page ad proclaiming exactly that. See for yourself: 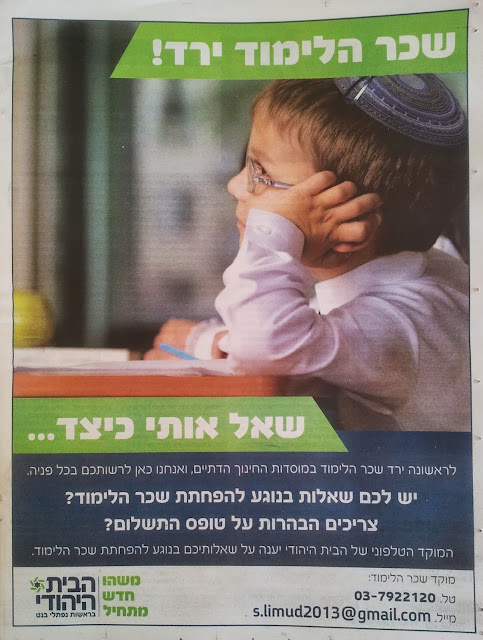 The ad says: "Tuition has decreased!"
Sorry, it actually says, "TUITION HAS DECREASED...ASK US HOW..."

All of this would be great...if it were true.
You see, the way that they reduced tuition was by sending a letter to each school telling them to: that's right, you guess it, decrease their tuition. Charge less, they said. Cut.
The schools replied: We'd love to charge less. Where would you like us to cut? From Torah hours? From secular subjects? These generally aren't schools that waste a ton of money, and to make such drastic cuts in tuition requires just one thing: money. And the Bayit Hayehudi didn't (or at least hasn't yet) sent any money. (Did I mention that the scheduled cut in every family's monthly social security payment went into effect this week? While Chareidim and Arabs will certainly be hit the hardest, Religious Zionist families tend to be larger than average as well, and will certainly feel a hit.)
I know this because that's exactly what I heard from the finance guy at my son's school. When I called to take care of tuition payments (they take it straight from the bank), I asked him about the cuts that the Bayit Hayehudi promised. He said, "As soon as they send us the money, we'll be able to lower tuition. Right now it's all a bunch of hot air."
Thankfully, the ad offers a hotline to ask questions and learn more. So I called. On the phone, the lady taking the information took my name, my phone number, and my son's yeshiva. Then she asked me for my email address, which I declined to give. She said, "OK, but it will cause a delay in us getting back to you." I wondered aloud why the lack of an email address would cause a delay in picking up the phone. She said, "That's what they told me to say."
Has my tuition gone down yet? Definitely not, despite what the ads say.
Will it?
To be continued...

Update: On Sunday, (the business day after I left a message), I got a call from a nice lady at the Misrad Hachinuch who asked me to send her official forms for how much I paid last year, and how much I'm being charged for the coming year. Seems reasonable, so I called the school to ask them for said forms. So far, I got last year's statement. This year? They're working on it.
To be continued...
Posted by Reuven Spolter at 11:47 AM