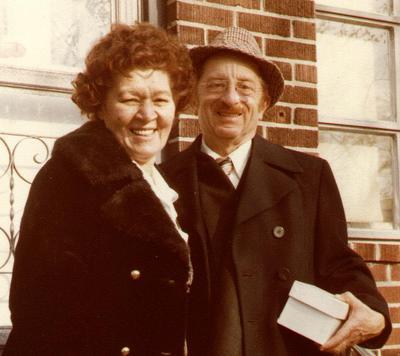 My uncle Zvi Friedman wrote the following yesterday about his mother (and my grandmother):


Today is the 32nd Yahrzeit of my mother יהודית בת הרב יצחק דוד ע"ה, Yehudis (Lichtenstein) Friedman also know as The Rebbetzin, Mommy and Bubby. My mother was a powerhouse of a woman - a real "Rebbetzin" from the old days. She would be in Shul every Shabbos making sure that the women knew where they were up to and leading the women in singing. Our house was always full of guests and there was always plenty to eat. She was active in the Sisterhood and Haddassah and all the things that an "Out of Town Rebbetzin" did. This was in addition to her raising 6 children and teaching pre-school and cooking and baking up a storm. She would collect clothing for the poor and sent tons of clothing to Israel for those who had nothing. There are generations of frum Jews because of my parents and their open home. My mother is missed by her 6 children and their spouses, 29 grandchildren, well over a hundred great grandchildren and now the start of the next generation - her great great grandchildren. Unfortunately most of her descendants never were zoche to meet her but anyone who did will never forget her. תהי זכרה ברוך.

I'd like to share a few personal thoughts that I remember about my grandmother - who died when I was all of nine years old, and yet I do remember her pretty well.

How to sweep the floor: One year, my parents took a vacation - I think to Israel, and my grandparents came down from Boston to take care of us. My grandmother thought nothing of handing me a broom and telling me to sweep the kitchen floor, which I proceeded to do, without much effect. She took the broom and explained that I was pushing too hard, and that if I wanted to sweep, I needed to do so gently. Later on I realized that while she was talking about sweeping the floor, the lesson she taught me applies to many other areas of life. Often, we move things far more effectively with a gentle sweep than with great force.

The Essential Importance of Jewish Education: For as long as I knew them, my grandparents lived in Winthrop, Massachusetts - as my uncle described - about as "out of town" as you can get. There my grandfather served as a shul rabbi for decades. Yet, my grandparents didn't always live in Winthrop. My grandfather's career began in Atlanta, Georgia (my mother used to have a southern belle accent, from what I'm told), where my grandfather served at Congregation Shearith Israel (you can read about a memorable Simchat Torah from Atlanta in the 1940s here.) Yet, my grandparents left a successful and growing pulpit in Atlanta, against the wishes of the community there, for Winthrop. It was not a move "up" in the rabbinic sense. Why did they do it? They moved for Jewish education.

The way my grandfather told me, he really didn't want to make the move - and I can well understand why. Yet, when my grandmother heard that Rabbi Soloveitchik had opened the Maimonides School in Brookline, the decision was made. They were moving - and so they did. And while her dedication and devotion certainly played a role in the fact that all of her children and grandchildren continue to follow in her footsteps and proudly live Orthodox lives, I believe it was that decision - her insistence that the family move to a city where her children would have to travel by subway on their own - but to a Jewish Day School - that made the critical difference.
It was a great sacrifice - both for her and for my grandfather. But it's a sacrifice that continues to pay divideds to this day.

Email ThisBlogThis!Share to TwitterShare to FacebookShare to Pinterest
Labels: family