Sukkot: The Holiday of Fiction

Finally this summer, our shul got around to building the pergola that we’ve been planning for several years. We’ve needed a shaded space where people can congregate away from the main sanctuary and schmooze, and the pergola fits the bill perfectly. When the time came for Sukkot, the pergola seemed like a perfect shul Sukkah. The slats were built with Sukkot in mind (many wood pergolas are built that way now, with slats that slide into perforated grooves without being attached to the frame of the structure.) The only problem is the walls – or the lack of walls. Moreover, the contractor had built lovely wooden benches permanently in the ground exactly where the walls should go. What to do? Well, being that it’s Sukkot, we could build “fake” walls. That’s exactly what the rabbi did. 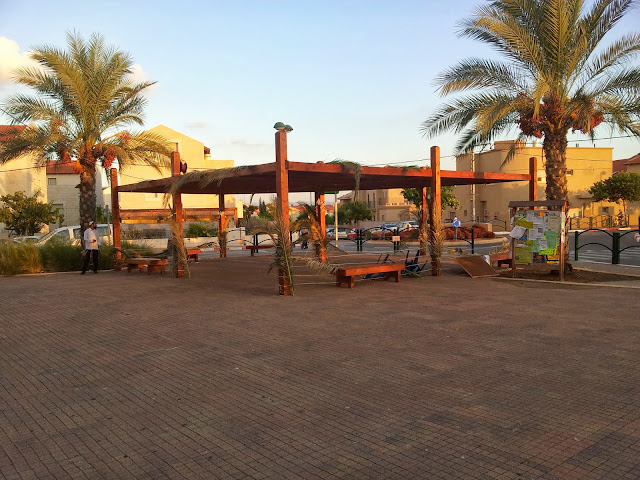 As you can see, he strung strings around the bottom perimeter of the sukkah forming “walls”, utilizing two halachic concepts concurrently. The first concept – “lavud”, posits that we consider strings, beams or posts within three tephachim (about a foot) of each-other to be “connected” which, for all intents and purposes, represent a solid structure. The second concept, called “gud asik”, teaches us that when wall reaches a minimum height of ten tefachim (forty inches about), an imaginary wall continues along the plane of the wall until it reaches the schach. Thus, the strings join together to form (an imaginary) wall, and the wall then rises to form (an imaginary) whole wall stretching to the ceiling. Voila! A Sukkah! Other similar halachot regarding Sukkah construction exist as well (Dofen akumah, anyone?)
It is no coincidence that Sukkot – the holiday which falls immediately after Yom Kippur -  involves a great deal of what we might call “legal fiction.” In fact, I believe that this legal fiction goes to the heart of what sitting in the Sukkah represents.
In a famous passage in Halachic Man (pp. 19-21), Rav Soloveitchik describes the manner in which the Halachic Man views the world. Instead of seeing the world as it is, he sees the world through the lens of halachic definitions. Everything he encounters is defined not by objective reality, but instead through the prism and lens of halachic paradigms.


When halakhic man approaches reality, he comes with his Torah, given to him from Sinai, in hand. He orients himself to the world by means of fixed statutes and firm principles. An entire corpus of precepts and laws guides him along the path leading to existence. Halakhic man, well furnished with rules, judgments, and fundamental principles draws near the world with an a priori relation. His approach begins with an ideal creation and concludes with a real one. To whom may he be compared? To a mathematician who fashions an ideal world and then uses it for the purpose of establishing a relationship between it and the real world, as was explained above. The essence of the Halakhah, which was received from God, consists in creating an ideal world and cognizing the relationship between that ideal world and our concrete environment in all its visible manifestations and underlying structures. There is no phenomenon, entity, or object in this Concrete world which the a priori halachah does not approach with its ideal standard. When halakhic man comes across a spring bubbling quietly, he already possesses a fixed, a priori relationship with this real phenomenon: the complex of laws regarding the halakhic construct of a spring. The spring is fit for the immersion of a zav (a man with a discharge): it may serve as mei hatat (waters of expiation); it purifies with flowing water; it does not require a fixed quantity of forty se’ahs; etc. (See Maimonides, Laws of lmmersion Pools, 9:8) When halakhic man approaches a real spring, he gazes at it and carefully examines its nature. He possesses, a priori, ideal principles and precepts which establish the character of the spring as a halakhic construct, and he uses the statutes for the purpose of determining normative law: does the real spring correspond to the requirements of the ideal Halakhah or not?
Halakhic man is not overly curious, and he is not particularly concerned with cognizing the spring as it is in itself. Rather, he desires to coordinate the a priori concept with the a posteriori phenomenon.
When halakhic man looks to the western horizon and sees the fading rays of the setting sun or to the eastern horizon and sees the first light of dawn and the glowing rays of the rising sun, he knows that this sunset or sunrise imposes upon him anew obligations and commandments. Dawn and sunrise obligate him to fulfill those commandments that are performed during the day: the recitation of the morning Shema, tzitzit, tefillin, the morning prayer, etrog, shofar, hallel, and the like. They make the time fit for the carrying out of certain halakhic practices: Temple service, acceptance of testimony, conversion, halitzah, etc. Sunset imposes upon him those obligations and commandments that are performed during the night: the recitation of the evening Shema, matzah, the counting of the Omer, etc. The sunset on Sabbath and holiday eves sanctifies the day: the profane and the holy are dependent upon a natural cosmic phenomenon - the sun sinking below the horizon. It is not anything transcendent that creates holiness but rather the visible reality—the regular cycle of the natural order.

To paraphrase the Rav, when halachic man looks at a Sukkah, he’s entirely uninterested in whether the structure is physically sound or not. Rather, his only concern is whether the building comprises a halachically valid Sukkah or not: Does the legal definition transmitted through the literature and tradition of halachah define the building as a Sukkah or not? It may very well be totally structurally unsound; a person could never live in it for very long. Yet, as long as it’s halachically a Sukkah, that’s all that really matters. It’s perfectly suitable for the mitzvah of yeshivah b’sukkah. We may add walls and decorations to assuage our sensibilities. Those elements may very well add to the beauty of the mitzvah. But, to halachic man, despite what we see with our eyes, if it’s a halachic Sukkah, that’s all that matters.
This, I think, is a critical element of the mitzvah of sitting in the Sukkah.
We live our lives struggling to balance between the world we see - success, money, power – and the underlying spiritual rules that we believe truly matter: closeness to God, self-control, subservience, spirituality. In essence, what we see blinds us to what we know.
We work all year to allow what we know to guide us, even when the two contradict one-another. On the simplest level, we refrain from work on Shabbat because we know working on the day of rest cannot bring true prosperity – despite the fact that what we see with our eyes seems to indicate the opposite. On Yom Kippur, we rise to our highest spiritual level when we abandon, to the best of our ability, the physical world which we inhabit – of pleasure, food, drink, sexuality – for a spiritual existence guided by spiritual reality. And then Yom Kippur ends and we are forced to return to our homes, to eat, drink – back to life as we know it.
Sukkot, then, represents a kind of middle ground. It’s a time of great physical joy – of dancing and celebration and rejoicing, of eating and drinking, and socializing with friends. But at the same time, we do all of those things not in our physical homes, but instead in the phantom construct we call the Sukkah – whose rules are defined not by the world we see, and whether the building could in fact protect us from the elements. It could not. Instead, we take shelter in a structure defined by halachic rules and regulations.
In essence we declare, simply by sitting in the Sukkah, that at least for another week we wish to live our lives guided not by the eyes which too often fool us, but instead by the eternal strictures which have faithfully guided the Jewish people throughout history.
Posted by Reuven Spolter at 11:00 AM

Email ThisBlogThis!Share to TwitterShare to FacebookShare to Pinterest
Labels: Sukkot