An Amazing Visit to Amatzia

On Pesach, we're always looking for interesting, cheap, uncrowded tiyyulim. There's an organization called Iggud Hamidrashot, which is a loose conglomerate of dozens of tiny Midrashot which comprise small groups of young women doing national service by teaching about the Land of Israel. The Iggud put out a brochure before Pesach with a bunch of flyers advertising different programs over Chol Hamoed, and the first one, from Midreshet Hadarom, caught my eye. 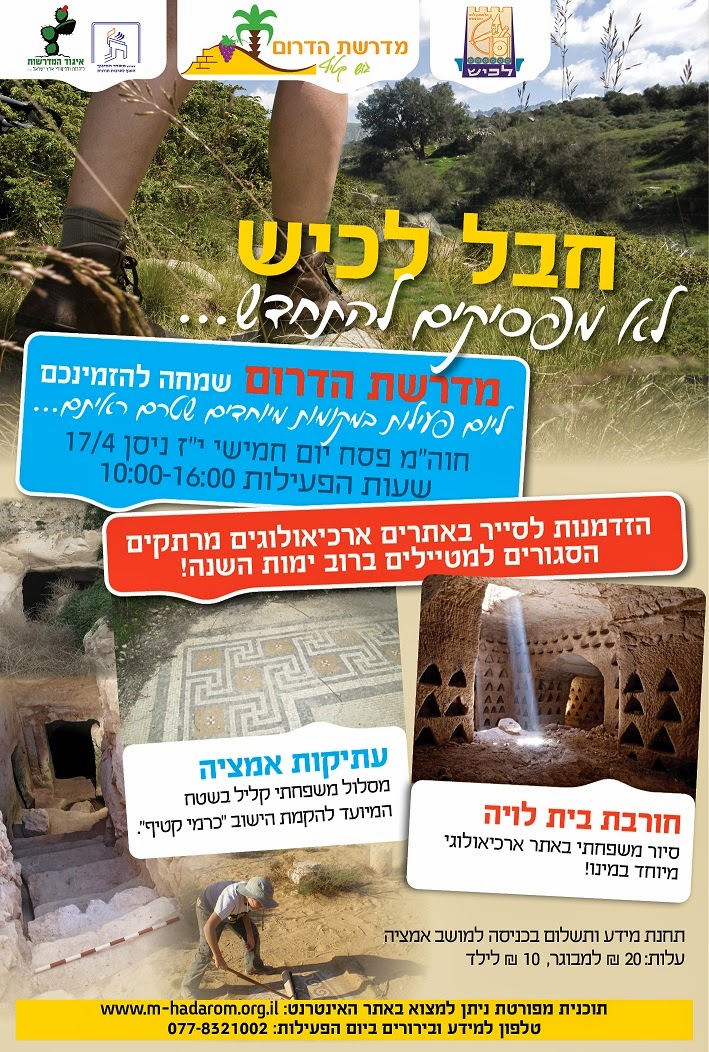 The flyer invited you to see the new archaeological finds in Amatzia, which is the Lachish Region. It caught my eye because I knew that Lachish was relatively close to our house - about a half-hour drive on relatively unpopulated roads (and who wants to fight traffic on Chol Hamoed?). So we loaded up the car, ran to the grocery store for BBQ supplies (hey, it was Pesach), and took off south. 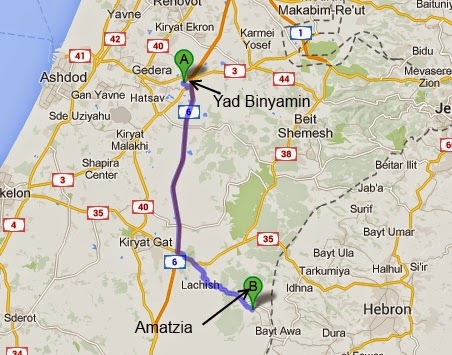 When the tour began, we walked through a fence outside the yishuv, and from there took a short walk up a gravel road. It was there that our tour guide explained that this area would in fact be the new home of Karmei Katif, which would house families that had been expelled from their homes almost 8 years ago. Yes, they're still living in caravans. 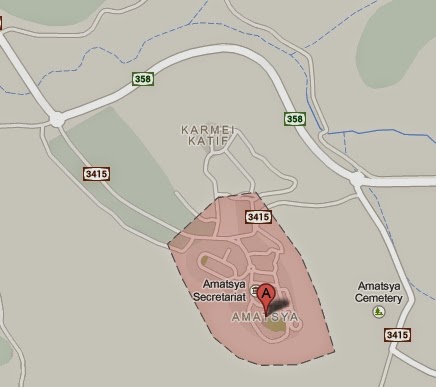 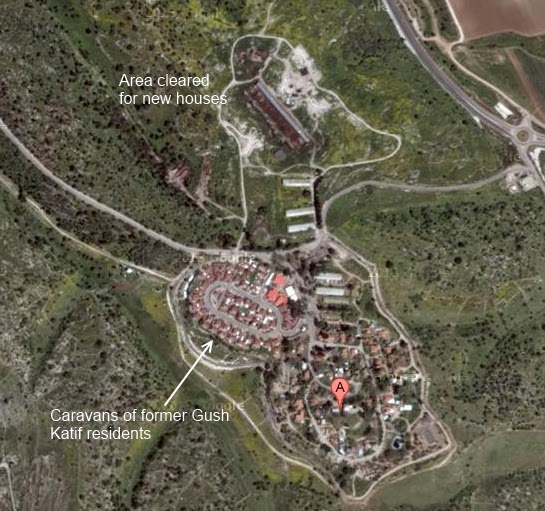 But when they went to clear the area to prepare it for houses, they made some amazing discoveries. They found an ancient house, including a bath, and perhaps a mikveh, that they believe existed in Roman times, some two thousand years ago. 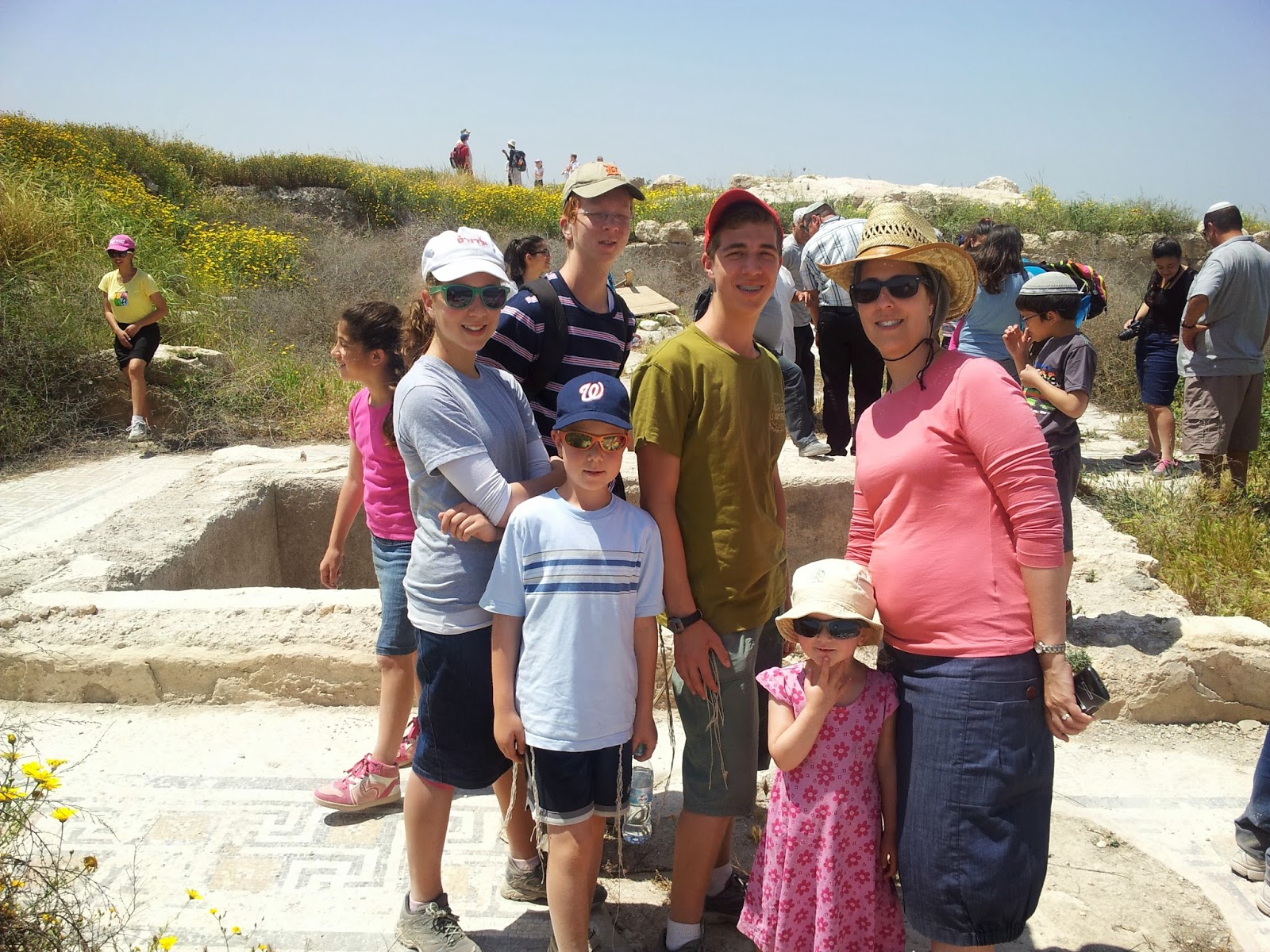 You can see the intact floor tile from that period in the background - which we were all walking on. Our tour guide from the Midrasha (who recognized our daughter Leah from a tour she had given to the girls from school) told us that the site would probably not be preserved, as it was slated for future housing. Seemed to make sense to us. You can't preserve everything. Anywhere you dig in Israel you find an ancient site. But the view from that house was breathtaking. (click the picture to enlarge)

I couldn't help but think, standing on that hill and surveying the mountains in the distance, that someone stood on this very hill and enjoyed the same incredible view two millenia ago - and how appropriate it is that in a year or two a Jewish family will be enjoying the self-same view, returning this hill to its rightful owners.

We then progressed down a hill to another huge clearing, where along the side of the road we entered a small cave, which emptied into another cave, which emptied into an ancient oil factory. In fact, it was the largest ancient, underground oil press in the entire State of Israel. (This one they're preserving). When they found the caves, they were only open a small amount at the top - the rest had filled with dirt over time. But what they found was truly astounding. 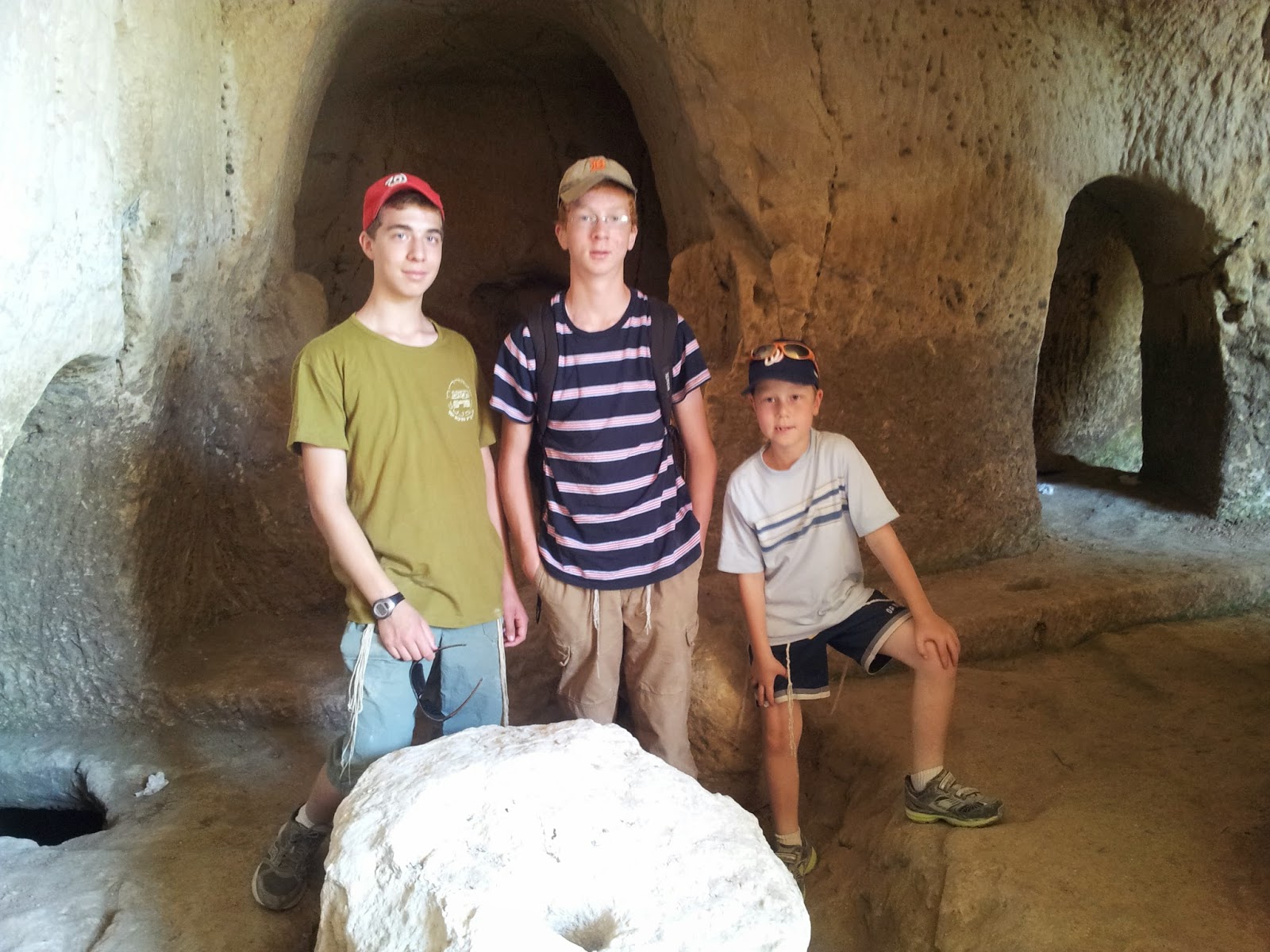 It was quite easy to see how the oil presses were made - where they crushed the olives; how they then placed the mush in mesh bags where they were pressed into oil using heavy stones to weigh down a huge beam: It was really an amazing site. 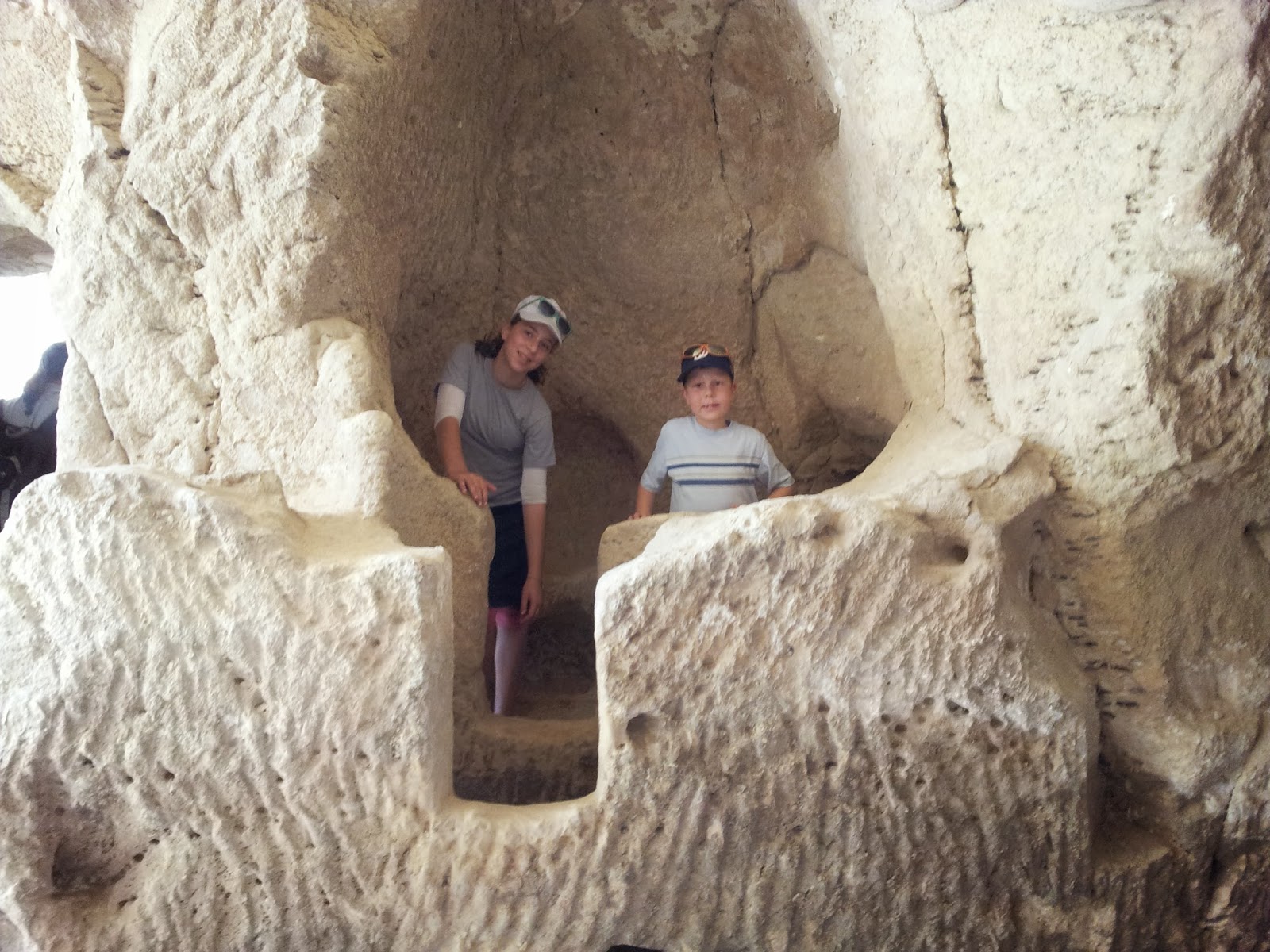 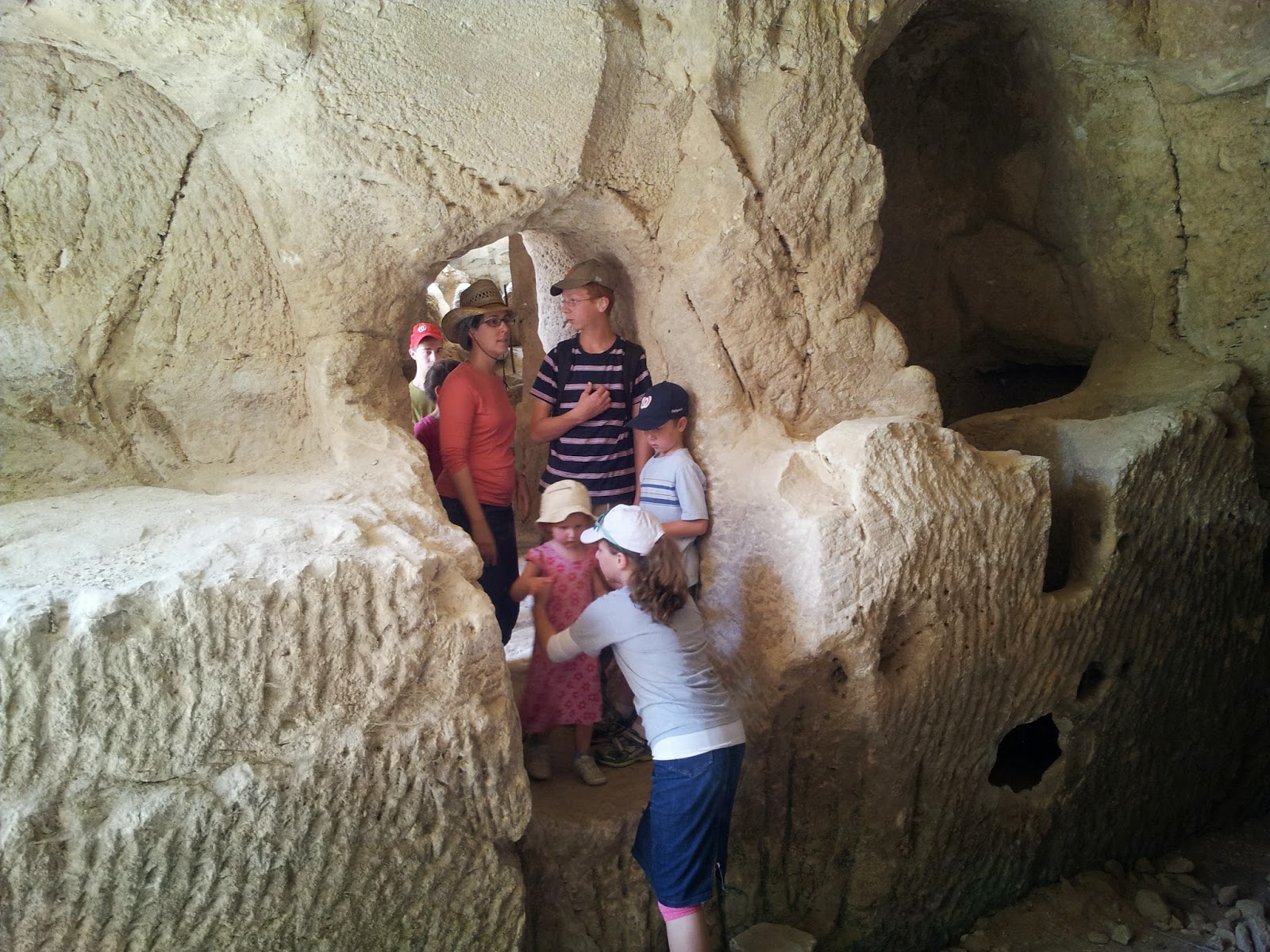 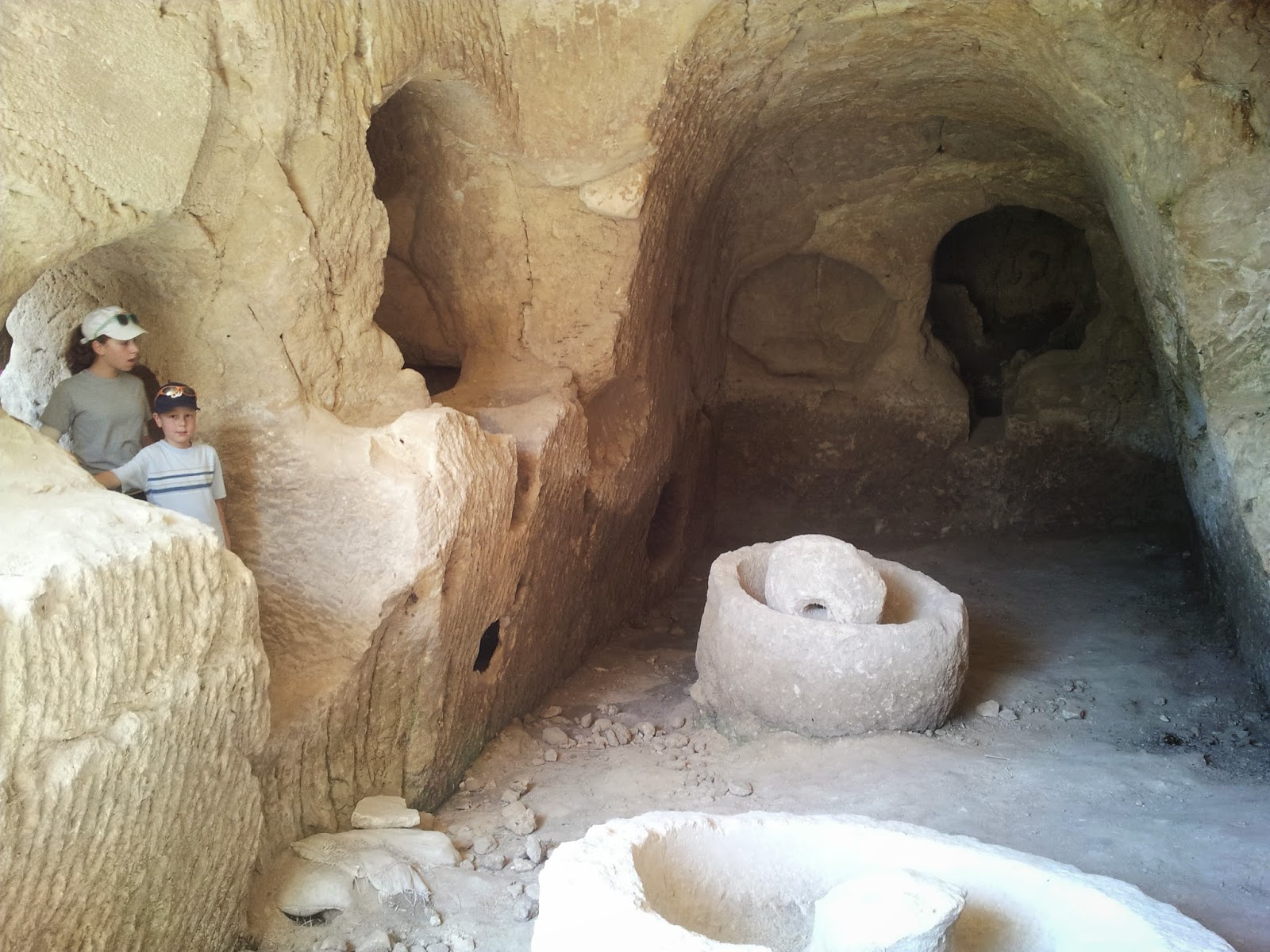 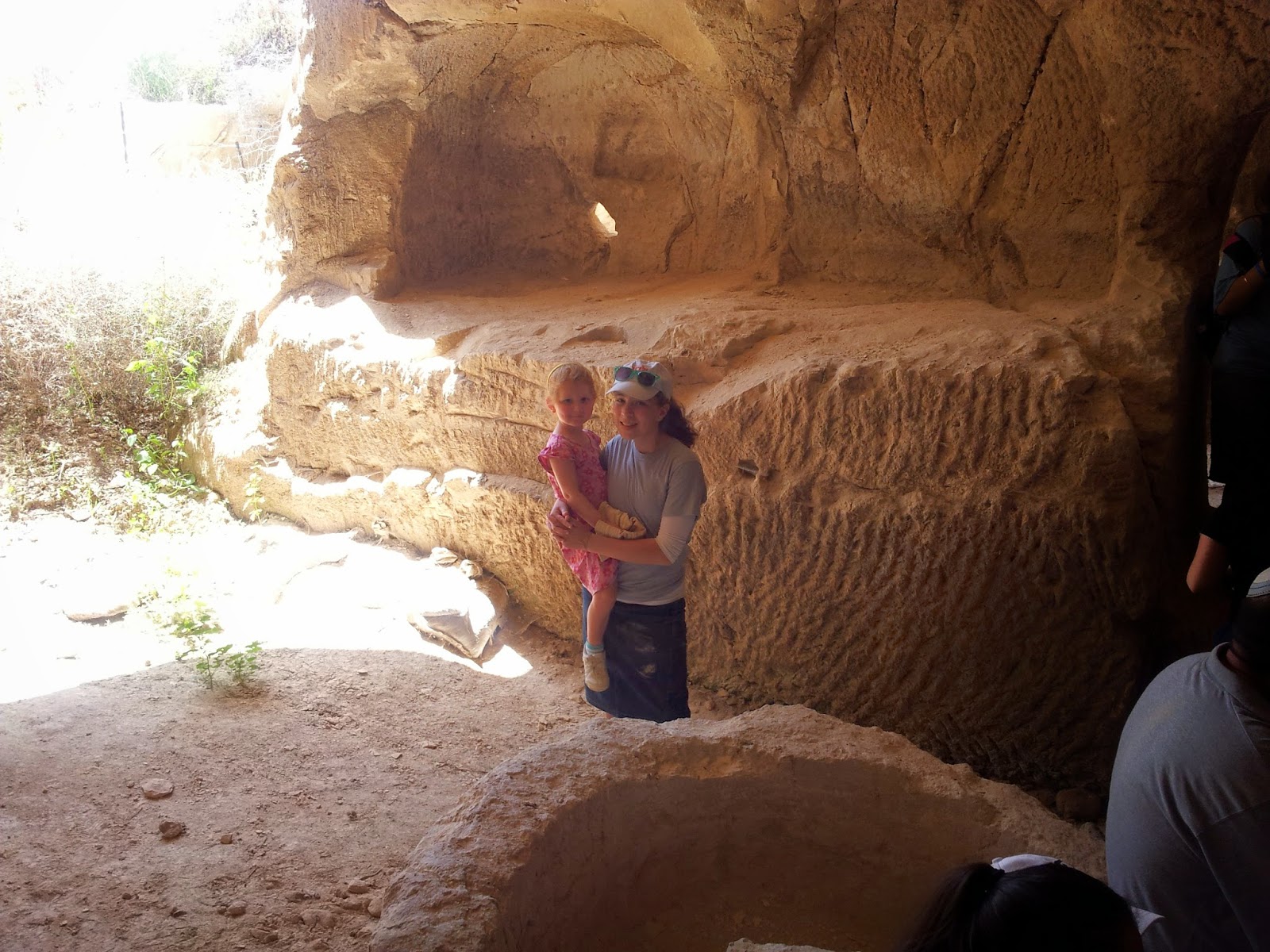 In addition, there were smaller tunnels above connected to the caves themselves leading to other caves, which our tour guide suggested were used during the Bar Kochva rebellion. It was like finding a new piece of history that we never knew existed.
But it makes quite a bit of sense.
We've all been to the Bell Caves at Beit Guvrin, which house beautiful, numerous caves which represent an ancient civilization and great economic activity. But why would we imagine that there was only one set of caves? Notice just how close Amatzia is to Beit Guvrin: 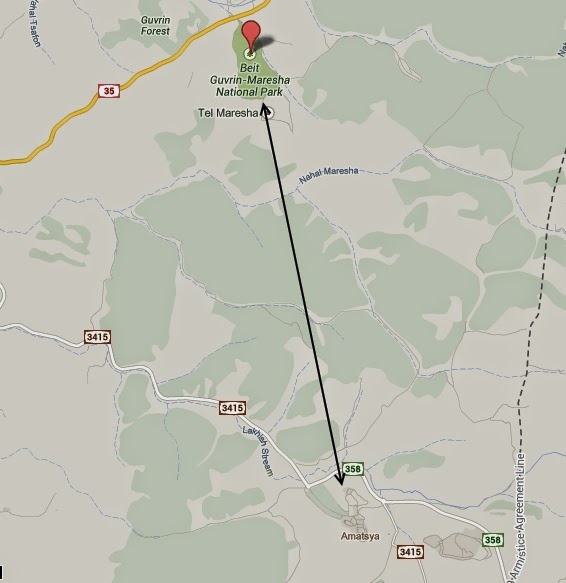 It would make sense that there were many more caves and areas of economic activity in the region, which is filled with caves that are perfect to both live and work in, away from the blistering southern heat, and situated on an ancient streambed, which provided water necessary for survival. Our tour guide noted that she had hiked with friends to other hills in the region and had found other caves with sealed earthenware jars (!) - that they just left there (!!!). I guess she didn't want to touch them. When you stand on the site in Amatzia and look at the surrounding hills, you realize just how much Jewish History is left to be uncovered.

At the same time, I couldn't help but feel that this small hill represented something much larger: A people finally reclaiming its lost Land, and rediscovering the history we always knew we had.

Posted by Reuven Spolter at 9:00 PM

Email ThisBlogThis!Share to TwitterShare to FacebookShare to Pinterest
Labels: Land of Israel, Things to Do in Israel