Back to the Basics this Shavuot 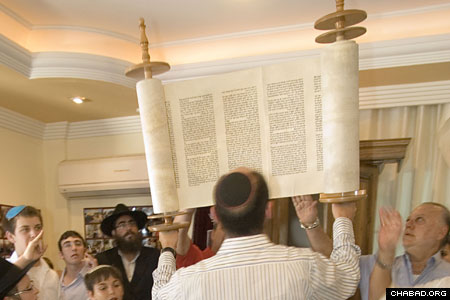 Two important blog posts have been troubling me recently: the now infamous Social Orthodoxy post, which I've blogged about already, and a recent post by Yoram Hazony about Biblical Criticism in Orthodox shuls.
That post prompted me to ask a neighbor the following question: How many of the members of the shul where you grew up believe in Torah MiSinai - that God gave Moses the entire Torah?"
His answer? You don't really want the answer to that question, do you?
This, to my mind, is the greatest threat to traditional Judaism today. It's not Tzniut, or Lashon Hara, or the Internet.
It's basic belief in the Torah.
Someone living in the Western world find himself consistently bombarded with messages that ridicule belief in the divinity of the Torah, and the authenticity of Jewish Tradition. This is especially true on college campuses. It's ironic, in a way. At the same time that Orthodoxy (the movement) is trendy, growing and popular, Orthodoxy (the faith) seems to be antiquated, ancient and increasingly out of touch.

Every time we read the Torah in shul, after we're done reading someone is called to lift up the Torah, and the congregation proclaims aloud,

וזאת התורה אשר שם משה לפני בני ישראל על פי ה' ביד משה
This is the Torah that Moshe placed before the Children of Israel, from the word of God in the hands of Moshe

We actually point at the Torah (although I have no idea why people do it with a pinky), and some authorities insist that one actually must be able to see the words of the Torah when making this declaration. Commenting on the custom of lifting up the Torah Rav Eliezer Melamed writes,

Over the years, Hagbah has lost some of its luster. We give it young people who don't read the Torah, or strong people (if it's one of those old Torah's that weigh a ton). We don't give it much thought. I also wonder how many people think about the meaning of the sentence when reciting it at Hagbah. How many people who don't actually believe the sentence, say it anyway, without even thinking? How many of my neighbor's old shul-mates instinctively recite the verse, although if you asked them about it, they'd hem and haw and start talking about unfolding revelation.
In his list of the Foundations of Faith, Rambam writes,

היסוד התשיעי ההעתק, והוא כי התורה הזאת מועתקת מאת הבורא השם יתברך לא מזולתו, ועליה אין להוסיף וממנה אין לגרוע לא בתורה שבכתב ולא בתורה שבעל פה. שנאמר "לא תוסיף עליו ולא תגרע ממנו".
The ninth foundation is that of copying - that is that this Torah is copied from the Created, the Blessed God - and not from anyone else, and one cannot add nor subtract from it - neither from the written nor the oral Torah, as it is written, "You shall not add nor subtract from it."

We will soon celebrate Shavuot - זמן מתן תורתנו - the Time of the Giving of the Torah. It's the day that we celebrate the Revelation - the great moment when all of Israel stood as one, at the foot of a simple mountain, and literally experienced the giving of the Torah.
Do we experience Matan Torah on Shavuot morning? (Or are we too tired from a night of lectures, stale coffee and barbecue - if you're lucky - to even listen to the Torah reading, much less appreciate what it means?
This Shavuot, tell the story of Matan Torah to your children. Read them books on the event. Talk about what it must have been like to stand at Sinai with the Jewish people at that incredibly historic moment. Teach them the meaning of the verse וזאת התורה that they already know how to say. Make it real. And make it clear to them that you believe every word.
Because if they don't know - fully and completely - that their parents do actually believe in the Divine nature of the Torah, how can we ask them to believe it themselves?
Posted by Reuven Spolter at 2:22 PM