Democracy and the Jewish State: Slomiansky v. Gal-On - Who Needs a Constitution when You've Got the Tanach?

Over the past several years, I have become increasingly interested in the fascinating intersection of religion and democracy in the State of Israel, and the numerous issues and challenges this thorny issue raises. Open a newspaper (those that still exist) on any given day in Israel, and the debate between Dat and Medinah jumps out at the reader. The struggle for the soul of the State of Israel began even before the founding of the State, and continues to this very day.
At the Orot Israel College, where I work (I work in admissions and administration, as well as teach a number of courses each year) I give a semester long course called "The Jewish State - the Intersection between Judaism and Democracy" which addresses precisely these thorny issues. I believe that in order to be good teachers (which Orot's students will soon become), these young women must be aware of and grapple with the dilemmas that frame public debate both in Israel, and across the Jewish world.

In an article published in Yisrael Hayom yesterday, MK Nissan Slomiansky was asked about the Bayit Hayehudi's opposition to passing more "Fundamental Laws" - essentially, a Bill of Rights (which the State of Israel famously lacks). He initially answered:

That's quite a statement. While he went on to say that he was also concerned with the potential future interpretation of those laws by the judicial body (which is famous for its history of judicial activism and legislation), his first comment made a fundamental point: Why should the State of Israel need to legislate its own laws when we already have a God-given canon of ethics, morals and legal values? In other words, Slomiansky actually articulated, in a shockingly honest way: Democracy is fine, but not when it conflicts with the values of the Torah.
His comments predictably drew immediate fire from Israeli left, this time on the Facebook page of Meretz Chairwoman MK Zehava Gal-On. She wrote, 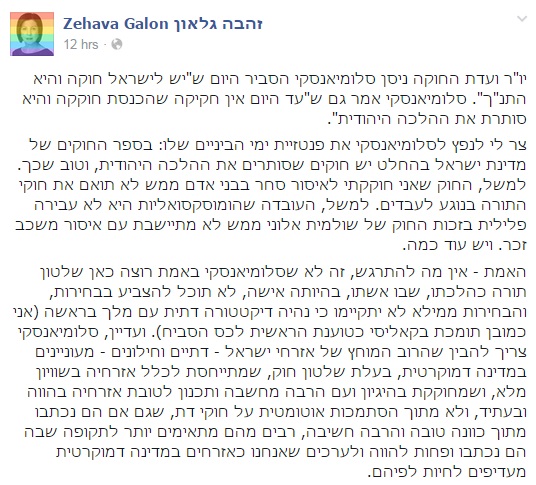 I'm sorry to pop Slomiansky's Medieval Fantasy Bubble [but]: In the legal statutes of the State of Israel there are certainly laws that contradict Jewish law, and this is a good thing. For example, the law that I legislated prohibiting human trafficking is not at all in concert with the laws of the Torah regarding slavery. For example, the fact that homosexuality is not a criminal offense, thanks to the law [passed by] Shulamit Aloni, certainly does not sit well with the prohibition against homosexual relations. There are a number of other examples.
In truth - we shouldn't really be all that upset. It's not that Slomiansky truly wants a government of the Torah according to all of it's halachot in which his wife, as a woman, would not be able to vote in election, and the elections themselves would never take because we would be a Jewish democracy led by a monarchy...Still, Slomiansky needs to understand that the vast majority of Israel's citizens - religious and secular - are interested in a democratic state, operating under the rule of law, that relates to all of her citizens with full equality, and which legislates sensibly with a great deal of thought and planning for the benefit of her citizens both now and in the future, and not out of automatic reliance on the laws of religion - which even if they were written with good intent and a great deal of thought, many of them are more appropriate for the era in which they were written, and less so for the present, and the values that we as citizens of a democratic state prefer to live by.

Gal-On's statement strikes me for a number of reasons: she strikingly formulates the seeming dichotomy between the two values of religion and democracy. Yet, at the same time, despite some effort, she cannot hide her antagonism for Jewish law - at least what she knows of it. Despite her allowance that Jewish law was written "with good intent and a great deal of thought", Slomiansky - and by extension all religious Jews - live in a "Medieval Fantasy Bubble" and adhere to an archaic set of values that, to her mind, do not and cannot relate to the modern era and the ideals of democracy, equality and fairness. And, of course, God is nowhere to be found in her democratic state. We are a nation of people, who legislate for ourselves.

How do we answer her charges? Is she correct that "the vast majority of Israel's citizens - religious and secular - are interested in a democratic state, operating under the rule of law", and would reject a Jewish state that adhered to halachah in full?
What about her more specific points: Do we really want to build a state that:
Would not prohibit human trafficking or slavery
Would appoint a king to rule over us
Would refuse women the right to vote
Would legislate homosexual activity as a criminal act (actually punishable by death)

These aren't simple questions by any means. Ideally, as religious Jews, we yearn for the coming of the Messiah, and the return of the Temple and with it the Sanhedrin. But where does democracy and equality fit in this equation? (If you'd like, Rabbi Chaim Navon offers his retort to Gal-On's comments on his Facebook page)

Are we really living in a Medieval Fantasy Bubble? Of course not. Let us not forget that while her rhetoric works well in the United States (note the colors of her profile picture) Gal-On sits firmly in the minority in Israel, and her far-left Meretz party has steadily lost seats in the Knesset and influence over Israeli society over the past decade. Still, her questions deserve more than one-line answers. These are complicated issues, and demand careful consideration, thought and discussion.
Posted by Reuven Spolter at 10:25 AM

Email ThisBlogThis!Share to TwitterShare to FacebookShare to Pinterest
Labels: Democracy and the Jewish State