Signs of the Times: Story on Page A14 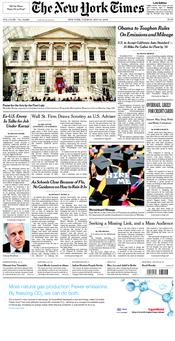 As a regular New York Times follower (on the web, that is), the past few days have brought a flurry of news stories. May 15 - "Netanyahu to Meet Obama as U.S. Priorities Shift" or in my words,"Will Netanyahu and Obama get along? Will there be a rift in the relationship? Or even better: "How will Obama pressure Israel to make peace with the Palestinians?"
May 12 - What does Netanyahu have to do to get the peace process moving? (Isn't it funny how the onus always falls on Israel? But I digress.)
The days leading up to the meeting gave me the impression that things would probably not go well; Netanyahu would be forced to cave in to Obama's overwhelming political power and personal charisma, and if not directly declare a Palestinian state and Israel's intention to withdraw to the Green Line, at least take some steps in that direction. Don't they wish.
So opening the NY Times website this morning, I looked for the story about the meeting "above the fold" - displayed somewhere prominent on the site. Nothing there. What happened?
What happened is quite simple. It seems that they had a civil, even amicable meeting where each party expressed its needs and wants, and how it views dealing with the complex issues of Iran and the Palestinians. Neither really bent very much, but each made an effort to entend itself. Obama did not, at least overtly, threaten or force Israel, and Netanyahu seems to have been straighforward and honest.
No big fight. No big split. In other words, a boring meeting and not much news.
Hence, when you search this morning's paper for the story on the meeting, instead of a front-page picture and bold headline, you'll find the story on page A12, hidden in the International section, sitting quietly between a story on how terrorists are trolling Facebook for victims (page A5), and another story on A12 about how 40 percent of Israeli Arabs deny the Holocaust.
In other words, "Nice job, Bibi."