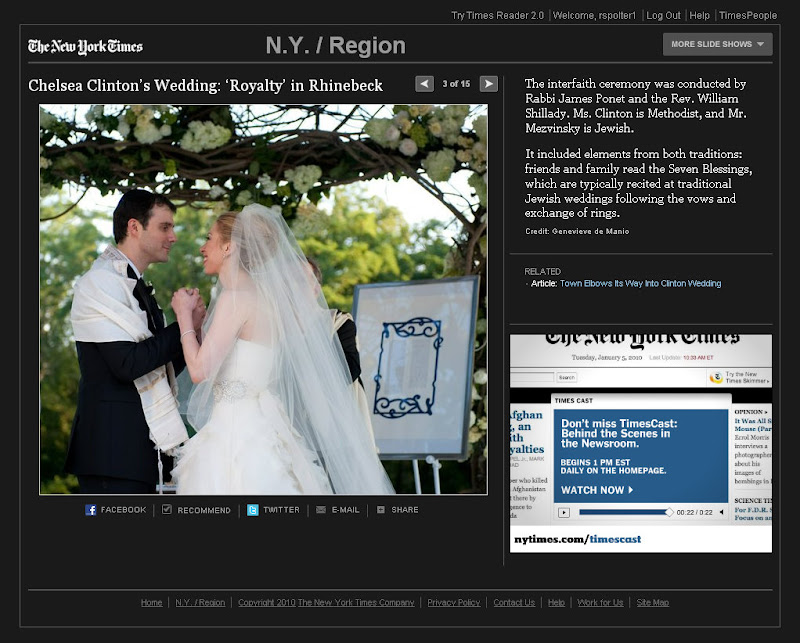 It's been almost a month since the Clinton-Mezvinsky wedding that rocked the Jewish world. The more I think about it, the more I have come to believe that as rampant as intermarriage is in America, the wedding represents a watershed moment for Judaism (and its demise) in non-Orthodox America.
Historically, while intermarriage has grown increasingly acceptable, it used to be at least "taboo." It was something to be, if not ashamed of, at least upset about. Parents made an attempt to convert the future spouse, if, for no other reason, sentimentality.
Yet, the picture of the Clinton wedding tells precisely the opposite story. It revels in the intermarriage. It's a celebration of the merge of cultures. At one time, a Jewish man marrying a gentile woman would have hid his Jewisness at the ceremony: no kippah, no tallit, no chupah, and certainly no ketubah. But this wedding demonstrates powerfully that this is no longer the case. Jews have gone from mourning marrying out to reveling in it as a celebration of a merger of different faiths, values and cultures. Intermarriage is the ultimate American expression: two people, coming from rich traditions, bringing their own heritage to a new family dynamic.
When I mentioned this to Rena, she noted that this phenomenon goes back to the hit movie, My Big Fat Greek Wedding. It was a really funny movie, but set precisely this tone. Who was the villain in the movie? The father who opposed his daughter marrying someone not from the Greek community. But he wasn't just depicted as old-fashioned. He was a fool - someone who believed that you could cure any ailment with Windex.
That's us today - the Orthodox who continue to reject the richness of American diversity - at least for ourselves. We're the idiotic parents who spray Windex on everything.
And, as I feared, the cards are beginning to fall even among the Conservative rabbinic leadership, which is supposed to lead the charge against intermarriage.
Rabbi Jason Miller, of Michigan, recently wrote an op-ed piece in the Forward calling for the Conservative Rabbinical Assembly to change its rules to allow its members to attend intermarriages. This comes following JTS Chancellor Arnold Eisen's attendance at, you guessed it, the Clinton-Mezvinsky wedding. Rabbi Miller writes,
The R.A. isn’t about to allow its members to officiate at interfaith weddings. But the attendance ban, which is listed in the code of conduct alongside the officiation ban, is a different issue. This policy forces rabbis to choose between violating a rule and slighting loved ones. The policy, enforced or not, adds pain to an already difficult situation for families. It sends a message that Judaism puts tribalism before dignity and respect.
I wonder: Is the R.A.'s ban on intermarriage on such firm ground? Is it really that difficult to see the Conservative movement finding a reason to allow intermarriages (in situations where the spouse agrees to raise the children in a Jewish environment, of course), in the interests of putting "dignity and respect" above "tribalism"?
Rabbi Miller doesn't want to be the evil father who uses Windex for everything. He wants to be the cool kid. But that "tribalism" has preserved the Jewish community in the Diaspora for 2,000 years.
And abandoning it will not help that. It will only make things worse.
Posted by Reuven Spolter at 3:20 PM