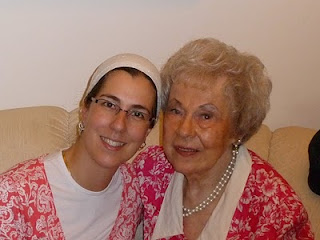 We're finally home. It was a great, long trip, but we're finally home. I want to share some impressions...
1. Stuff: The United States has much, much, much more stuff. The houses are bigger. The cars are bigger. The stores are bigger. I don't think that anything in Israel can compare to Walmart, in terms of hugeness. It's just ridiculous how much stuff you can get in one store, and how wide the aisles are. I think you could drive a car through Walmart. Really.
In Israel, it's not that you can't get stuff. You can get pretty much anything you want (for a price) - except for Heinz Sugar Free Ketchup. That you can't get. But there's less place to put the stuff. You don't need as much. In the United States, we had an extra freezer, full of food. Here in Israel, we're fine with the regular fridge. You learn to function with less, and I don't miss the "having" more that's so natural to life in America.
2. Aliyah from America. Or the lack of it. Yawn. I spoke in shul in Silver Spring last Shabbat between minchah and Ma'ariv in the afternoon. I spoke about Israel, Jewish identity, understanding mitzvot in the context of national identity - nothing I haven't written about on the blog before. (In fact, someone who happened to be at shul is a reader, and he told me that I basically combined three blog posts together. Sorry about that.) I ended with a pitch for living in Israel, as that is the greatest, most powerful expression of Jewish identity. The talk was fine, I guess, but I just had a sense that the audience wasn't really interested. People have heard the "Israel" message before. They know we're here. And they really do care about Israel. But living here? That's not that high on the agenda - if at all. Getting that sense made me sad.
3. Produce: The produce in Israel is better. Especially the cucumbers.
4. Prices: Food in America - especially the processed food, is much cheaper. Clothes as well. It's ridiculous how much you can get for not much money at Target. (Yes, we spent a lot of time shopping.)
5. Family: We didn't tour that much - it was more about finding stuff for the kids to do. But we did spend a great deal of time with family, which Israel doesn't have much of for us. While my brother lives here with his family, the rest of my siblings (as well as Rena's) live in the U.S., and we miss them. While the Shabbatot were crowded, it was great spending time with everyone, and even greater that our children had the opportunity to get to know some of their cousins, but upsetting that it's hard to know when they'll see them next, and that they won't really know their cousins well at all.
6. Great Grandparents: The prime motivators for our trip were Rena's grandparents, who we affectionately call Savta and Grandpa. (For reasons unclear to me, the great-grandchildren call Savta "Bubby"). They are getting on in years, and were unable to come to Israel for Simcha's bar mitzvah. So we promised when we made aliyah two years ago that we'd come during the summer to celebrate with them. Simcha davened at my in-laws' shul, read the haftarah, and we had a family party on Sunday for extended relatives. It was wonderful to see them in such high spirits, but also hard, for obvious reasons. It's difficult to know when we'll be able to see them again, which is both sad and sobering. We call and we're going to Skype, but it's not the same.
7. You can't go home again: Somehow, this visit back to Silver Spring was different for me. I feel increasingly alienated every time I go back to the community in which I grew up. Each time I recognize fewer people. I drive by the homes where I spent my childhood, but the original families no longer live in them. What are those people doing in that house? I find myself wondering. Most painful for me was the absence of Rabbi Anemer, z"l. The shul has hired his assistant to take over, but out of deference, Rabbi Rosenbaum does not sit in Rabbi Anemer's seat, whether in the main shul or in the chapel. Both sit empty, forlorn, lonely. Rabbi Anemer was, as someone described to me, like a security blanket. His presence made you feel good, that all was well, that he was taking care of things. And returning to Kemp Mill, seeing his stark absence, left an empty feeling in my heart.
Posted by Reuven Spolter at 2:39 PM