Kudos to the Robert M Beren Academy. But Not for Keeping Shabbat

I have very, very fond memories of playing varsity basketball during my high school years. I was a four year starter on our team, and scored an average of about twelve points per game. Pretty respectable, I think. (Although that might have had more to do with the fact that the school only had about sixty guys in the entire upper school.)
Looking back, almost every aspect of our team's very existence was unusual. The Yeshiva had a long history of varsity basketball, but in truth, having a basketball team at all isn't very "yeshivish." (Checking the Yeshiva website today, it seems that they still have a team, but you wouldn't know it from the main site.) Once the season began, we really never practiced at all, because the school wouldn't allow practices on weeknights. (We only finished classes at 6:15 in the evening, and if you added night seder - which I did - we left the building at 7pm on a normal weeknight, and on Thursday, mishmar went from 8pm until 9:15pm.) So, our coaches - and there was a new one almost every year - would schedule all of our games on both Saturday nights and Sunday afternoons, pretty much every weekend. I didn't think much of it back then, but looking back I now realize that we played every Saturday night game not having practiced for an entire week and every Sunday game still tired from the night before.
This might explain why we were generally terrible.
My junior year, we were actually respectable, almost reaching a .500 record. But other than that, we stank. Badly. Which was fine. Losing built our character. (I have a very vivid memory from junior high school of attending a varsity game once when the coach didn't arrive until the third quarter, by which time the team was losing by a score of something like 80 to 15. Our intrepid coach called a timeout, gathered the team together and proclaimed, "They're not going to score a single point more!" The entire team literally burst out laughing.) Thankfully, during my tenure, it was never that bad. Coaches arrived on time to games. But we were still never able to beat the hated Hebrew Academy during my tenure. (and when we finally did, they stopped playing us.) That still stings to this day.
Despite all the losing, I remember almost every aspect of playing on the Knights with great fondness. Somehow the sting of defeat has faded, and my mind recalls the great rides to games and practices; taking offensive fouls during practice, pizza at The Jaffa Gate (alav hashalom) after games (er, losses), and the great friendship and teamwork we enjoyed. 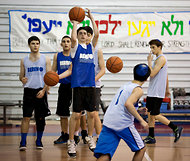 Why the trip back down memory lane? My thoughts returned me to my high school basketball career reading a New York Times piece on the Robert M Beren Academy's decision not to participate in the semifinal game of the Texas state private school championships, for the simple reason that the game is scheduled for Friday night.
These stories appear every so often, and on one level, they do represent a kiddush hashem. In a time when too many people treat values as fungible, it's nice to be reminded that in the Orthodox world, we still treat Shabbat as Shabbat.
But I wonder: Is that really news? After all, isn't that why the parents of the Robert M. Beren Academy send their children to an Orthodox, shomer Shabbat school? To me, it would be more newsworthy if they did play - which would be startling and upsetting. Of course they shouldn't play.
No, what surprises me about the article instead is the fact that they made the state semifinals at all. You almost never hear about small, Orthodox schools with a record of...wait for it...23-5! And this is not a huge New York school that we're talking about either. The upper school has 71 students - boys and girls! Yeah! Go Jews! Go small schools! Go Orthodox yeshivot!
It's like Hoosiers, only Jewish. And that's great news to me.
Posted by Reuven Spolter at 3:59 PM