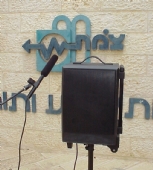 One of the more enjoyable aspects of being a community rabbi was the opportunity to speak from the pulpit every Shabbat. I worked very hard at it, writing my speeches beforehand, giving a good deal of thought not only to what I would say, but how I'd say it. Yet, one aspect of the Shabbat Drashah presented a challenge that was never easy to overcome. Instead of speaking from the pulpit, I had to scream. Otherwise, no one would have been able to hear me.
The main sanctuary in our shul is indeed beautiful. But it was also quite deep (and narrow), with the women seated behind the men. In order for any of the women to hear me at all, I learned to speak slower, but also how to project at a rather high volume. Essentially, I had to yell without yelling. And, as any public speaker will tell you, that takes away any possibility of nuance in tone. It's all one tone: loud.
It would have been much easier to speak using a microphone. Only there wasn't one that was widely accepted for Shabbat use. At least there wasn't until now.

Machon Zomet recently introduced a new Shabbat microphone system brandishing its stamp of approval. In truth, from a halachic point of view, this is really nothing new. People (including my son) have been using hearing aids for years, and hearing aids are essentially identical to the system in question. Moreover, the issue of sound systems on Shabbat has enjoyed comprehensive halachic analysis from many different circles, and while many modern poskim permit its use, you simply don't see them in normative Orthodox shuls. Why not? Because they don't feel right.
For some reason, the Orthodox community simply rejected the use of these microphone systems, labeling shuls that installed them as "progressive" or "liberal", which are code for "almost Conservative." In essence, the use (or lack of use) of these types of systems isn't halachic, but cultural. We don't use them because...we don't use them.
Yet, Zomet has, over the past thirty years, achieved a level of authority - especially in Israel, where you can find its stamp on many products that you buy every day, from water heaters to gas stoves - and even in the United States as well. I'm not sure how many shuls in America will order this system today. But you will begin to see them in Israel. In fact, Ynet (in Hebrew) just reported on a Shavuot evening program that used the microphone (and they probably gave a shuir about why they were using it). As more and more communities install these systems over time, the pressure to install them will grow, as people will rightly wonder why those hard of hearing, or the people in the back of the shul, or women (stuck in the balcony) shouldn't be able to hear the Chazzan or the Rabbi. After all, there are real tangible benefits to loudspeakers. Even in shul.
And, as so often happens, when Americans return to their shuls from a visit to Israel, they will begin to report on how wonderful davening was at the very reputable shuls in Israel at which they davened. And they'll start pressuring their rabbis to allow them to install the system in their shul as well.
Will the system become widely accepted in most Orthodox circles? Who knows? Moreover, as they become more widely adopted (which I think they will over time), I fear that they will also serve to further divide our community, between people who will daven in shuls with a microphone, and between those who don't. (Would a chareidi family daven at a family simcha in a shul which had a mike? Conversely, would the shul agree not to use the mike should a family make a request? I can see the fights already...)
Just to be clear, I am not personally comfortable with such a system. It just doesn't feel right. I really don't like the computer screen in the back of our shul that displays davening times. It just doesn't belong in the sanctuary.
My point is, something that doesn't feel right to me might not bother my children - or their children - at all. So while we might reject the use of this microphone today, there's no way to know if it won't be a part of some, or most Orthodox shuls in the future.
Posted by Reuven Spolter at 10:34 AM

Email ThisBlogThis!Share to TwitterShare to FacebookShare to Pinterest
Labels: Shabbat, Shabbat and Technology