What is Jewish Culture? Does it Even Exist? A Thought for Achrei Mot 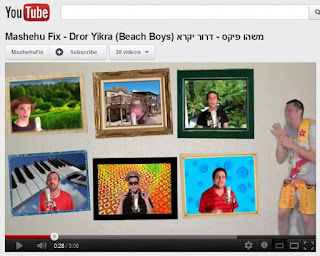 On Shabbat, when we sing the zemirot around the table, I often wonder about the tunes to which we sing the beautiful words of the songs. To what degree are those tunes simply a reflection of the myriad of cultures from which the Jewish people have emerged?
Take Dror Yikra, for example. On the one hand, its a Sephardic ballad, drawing heavily on the mournful Arabic notes we all recognize. The next week, it's a gruff German tune, short, curt and severe. Then, the following week, it's a Beach Boys tune (who doesn't love Dror Yikra to Sloop John B? Check out this version - nicely done, but it really highlights the Beach Boy's theme.) You can even sing it to Scarborough Fair. Some claim that Paul Simon actually stole the tune from his grandfather, and that it was originally Dror Yikra. Actually, I think that you can sing it pretty much anything. While the words are undoubtedly Jewish, to what degree does the tune influence the song? Is Dror Yikra to the Beach Boys "Jewish"? Is that the way we're supposed to sing these songs? And if not, what tunes do we actually have that are in fact authentically Jewish? What "Jewish" culture exists that isn't borrowed from the surrounding culture in which we lived?

The section of the Torah that outlines the numerous forbidden sexual relationships is called the Arayot. One would think that it needs no introduction. And yet, the Torah introduces this section in a rather unusual manner.

The entire short section requires analysis and explanation. Rarely, if ever in the Torah, do we find allusions to other cultures and civilizations. What behavior of the Canaanites and Egyptians does Judaism find so abhorrent that it must be mentioned specifically? What is the meaning of the final phrase, וחי בהם - "he shall live by them", and what is its relevance to the rest of the section? What is the meaning of the commandment, "you shall not walk in their statutes"? What do they do that we may not?
While the notion of  - חקות הגויים - "the laws (or practices) of the nations" - is a broad and fascinating subject that requires deeper analysis, I'd like to focus on Rashi's powerful comments. What do they do that we may not? Rashi writes,

מה הניח הכתוב שלא אמר, אלא אלו נמוסות שלהן, דברים החקוקין להם, כגון טרטיאות ואצטדיאות.
What has the verse left out that has not yet been stated? This must refer to their customs - things which are statutes for them, such as their theaters and stadiums.

In other words, Jews are forbidden to follow secular, non-Jewish culture. According to Rashi we may not attend non-Jewish sporting events, nor may we sit in their theaters to watch their plays (or movies).
Rashi's comments raise a myriad of challenges for the modern Jew (and I imagine Jews in all times). Does he really mean that I can't attend a Tigers game (I'm not sure) or the latest Avengers flick? (pretty much sure that he meant that) To what degree have we become so embedded in the culture surrounding us that it is now our culture as well? More pointedly, if Judaism disdained foreign, non-Jewish culture, what is Jewish culture?
I thought of this question in light of a short news item about a future Ten Volume Look at Jewish Culture that recently appeared in the NY Times, which reported that,


Yale University Press and the Posen Foundation are embarking on a 10-volume anthology that covers more than 3,000 years of Jewish cultural artifacts, texts and paintings. “This monumental project includes the best of Jewish culture in its historical and global entirety,” the editor in chief, James E. Young, a professor of English and Judaic Studies at the University of Massachusetts Amherst, said in a news release. “It will provide future generations with a working legacy by which to recover and comprehend Jewish culture and civilization.”
The series, called the Posen Library of Jewish Culture and Civilization, is starting at the end, with Volume 10, a collection of works that date from 1973 through 2005 and include cultural figures like the writers Saul Bellow and Judy Blume, the architect Frank Gehry, the sculptor Louise Nevelson, Supreme Court Justice Ruth Bader Ginsburg and the Harvard law professor Alan M Dershowitz. (Volume 1 will begin in the second millennium B.C.) More than 120 scholars are expected to work on the project, according to John Donatich, director of Yale University Press.

Reading the piece I wondered (and commented on the site - I'm "Shibaz"), "Why is the writing of Judy Bloom "Jewish culture"? (Sure, she wrote great books, but was there anything particularly "Jewish" about Superfudge?) Will this be an anthology of Jewish culture, or simply a collection of cultural items created by Jews? And perhaps most importantly, what's the difference between the two?"

So is singing Dror Yikra Jewish if I sing it to the Beach Boys? Is that not what Rashi meant when he wrote that we must not follow "their customs"? And if he did mean that, how should I sing Dror Yikra - or any other song? What is a Jewish melody? What is Jewish culture?
Posted by Reuven Spolter at 9:19 AM