Is the Torah Really for Terror Victims? 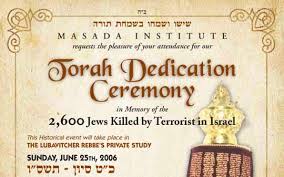 It's a pretty reliable phenomenon. As soon as the rockets start flying, emails begin flooding our mail asking for donations. Sometimes the emails are relevant, like the OU email asking for donations to help flood victims. But sometimes they seem at best only tangentially related to crisis itself.
For example, this morning I received an email titled, "Please help write a Sefer Torah," which stated that,
With the missiles falling in the South, over 1 million of our brethren have come under this blanket of terror. Please join with me in a project that was started before the current 'rain' of terror, but is dedicated to Victims of Terror.
I really wanted to be fair about the email and appeal, which bothered me - and still does, so I sent a letter to the originator of the email, (Hillel Levin - hillel at israelchesed dot com) that said:

Dear Hillel,
I'm really sorry, but is this really the time to be raising money for a Sefer Torah? If people want to send money, perhaps they can do so to alleviate the suffering of the people in Sderot, the families of those killed in Kiryat Malachi, or the many other causes actually related to the rockets themselves. Where is this Sefer Torah even going to be housed? How is it helpful, other than in some kind of pseudo-mystical way that no one can really understand?
I could even accept sponsoring additional learning of some kind during this challenging time.
This really smacks of tzedaka opportunism, and leaves me with a very bad taste in my mouth. I was going to post this on my blog, but felt that you should have the opportunity to respond. If you want to raise money for chesed, that's great! But use it for chesed.
Best,
Reuven Spolter


I'm sharing his prompt answer with you in full with his permission:


Dear Rabbi Spolter,
I appreciate your questions and the opportunity to respond.
First, I think that you should know that I made Aliyah 6 years ago and spent 4 of those years working for an amuta which connected Jews all over the world to both Chayalim and to families/children in Sderot. So I am sensitive to the needs of those groups.
The motivation behind this particular Sefer Torah is to honor the neshamot of terrorist victims. It was started about 3 months ago by an amuta: Ahavat Chinam, which provides services: education, dormitory, counseling etc to girls at risk and girls coming back from relationships with arabs, drugs, lack of observance etc. These problems exist before, during and after the current escalation of this 64 year ongoing war with the world around us.
While the project was started 3 months ago, the efforts have only resulted in a handful of complete Parshaot being sponsored. I was asked to assist in the effort 2 weeks ago.
Timing is such, but one can sponsor a psuk in the merit of our chayalim.
This is a time for us to do t’shuva, t’filla and tzedakah. Out right, this is a tzedakah opportunity, they have received p’sak that funds for this Sefer Torah can come from one’s Ma’aser Funds. In addition, since part of the funds will go to the amuta to assist these girls in their personal t’suva process and one of the things that these girls do is t’filla, supporting the writing of this Sefer Torah is a means to support all 3 things that we need to do every day, but especially during this particular Matzav.
One of the things that I have seen some Rabbis say is that we need to continue life as much to normal as we can as a means to show HKBH that we have emmunah and bitachon in Him and our enemy so that he sees that we trust in HKBH.
I know that Yad Binyamin is a lot closer to the missiles then Shiloh is, but travel to Shiloh has always been under attack and while, not missiles, the rocks and boulders that are thrown and the fire bombs that are tossed have increased in frequency on the roads to and from Jerusalem.
At the same time that we here in Israel are under rocket assault, our brethren in the Eastern US are pumping and digging out of Storm Sandy. So they also have a tremendous need for funds, even if only for a temporary fix as they all pack up and make Aliyah. Is it insensitive to ask them for help in writing this Sefer Torah? They need a connection with HKBH also. They lack both the walking, breathing and living in Eretz Yisroel as a z’scut as well as being outside of HKBH umbrella of protection, where He neither slumbers nor sleeps.
This particular Sefer Torah will be housed at the Kotel, the center of the world and the place that the survivors of Terror turn in their prayers. It is also a global fund raising effort, so for both these reasons, I believe that this is an appropriate location for this Sefer Torah.
Rabbi Spolter, we are not a lot of money for participation in this Sefer Torah only US$ 18 or 72 NIS, so one can participate in this project and other chesed projects as well.
One of my correspondents, on Moshav Shokeda, which is a lot closer to Aza then Yad Binyamin has asked for assistance to purchase a migunit-shelter which runs 70-80,000 NIS. Here is another opportunity to do Chesed: how much can you and your ‘community’ (local and on-line) raise for this project?
If you are going to post to your blog, please share this.
Hillel Levin


Of course it's nice to sponsor a sefer torah. But, first of all, does the Kotel really need more Sifrei Torah? More importantly, the money really isn't for the Torah. Rather, it's to raise money for an organization doing other wonderful work - but the Sefer Torah is the means, not the end. Why not just ask for money for the organization? Probably because that hasn't worked so well. Finally, while the charity is wonderful, it really has very little to do with the current situation. The money raised goes to help girls at risk - an important cause, but one that has no connection whatsoever to terror victims. Intimating that it does seems questionable, at best.
Perhaps I'm over-reacting, but I don't think so.
Posted by Reuven Spolter at 1:58 PM

Email ThisBlogThis!Share to TwitterShare to FacebookShare to Pinterest
Labels: Tzedakah