Aside from race for the head of the party (the election is this Tuesday), on the following week we'll pick the slate for the full list of candidates for the party. So, the weekly Alonei Shabbat (supposedly parshah sheets, but it's all politics now) are full - really full of ads for the different candidates running for office. These things really don't belong in the shuls, and the people who make these weekly rags are clearly the big winners in this race - as is Rav Chaim Drukman, who appears in almost every ad.
The most popular weekly is called Olam Katan (you can download it here for yourself, or if you prefer Giluy Daat), which is supposedly aimed at young people, with type so small you can barely read it. I say supposedly, because while the target audience can't really vote, the paper is full of ads for people that you've never really heard of running for the Bayit Hahehudi list.

Each ad lists:
1. The candidate's qualifications
2. How he served in some elite military unit
3. What a great guy he is
4. Which Rav endorses him (It seems that Rav Druckman has endorsed pretty much everyone)
5. How he will unite the party. In fact, the ads seem to be endorsing each other, with each candidate claiming to get along with both Orlev and Bennett.
What's the difference between each of them? No idea. None whatsoever. Again, it's all about who you know. Although if you're reading this, I'm going to vote for Jeremy Gimpel. He seems like a really good guy, and he speaks English.

My favorite ad by a very wide margin? I love the ad for Harav Rachamim Nissimi. It proclaims: OUR POWER IS IN OUR UNITY! Sounds great, doesn't it? 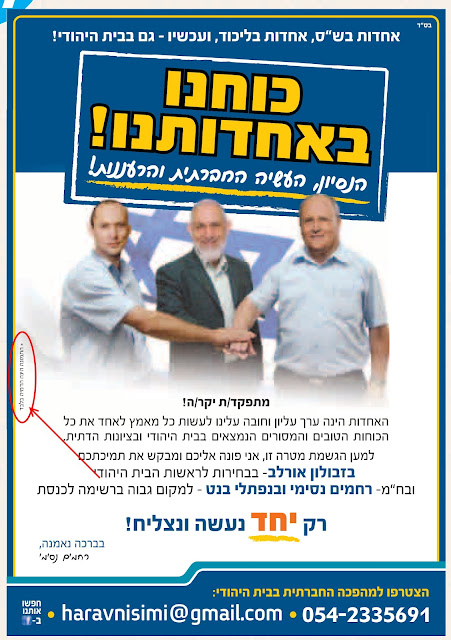 Again, I know nothing about Rav Nissimi. He seems like a good guy, and he's a Sfardi running on the Bayit Hayehudi list.
His ad claims that he's the man to unite the party. After all, look at that great picture! He's standing there with Orlev AND Bennett, and they're all holding hands in the huddle, ready to break and start playing football! Hike!
But then you read the words, and he tells you: For the head of the party, vote for Zevulun Orlev. Then, vote for Bennett and Nasimi high on the list for the Knesset the next week.
So now you know what team he's on.
The best part of the ad? Look at the tiny words on the side when I have circled in red, which I'll help you with: התמונה הינה הדמיה בלבד - which means, "picture for illustrative purposes only", which really means, "This picture never happened. It's a fake that we Photoshopped."
I love it! Can Rav Nissimi unite the factions of the party? Sure he can - with Photoshop.
In real life? That's another question entirely.
But this isn't real life. It's politics.
Posted by Reuven Spolter at 7:00 AM