A Fantastic Day: Bezalel Competes in the Chidon Hatanach, and I Get Another Reminder Why I Moved to Israel 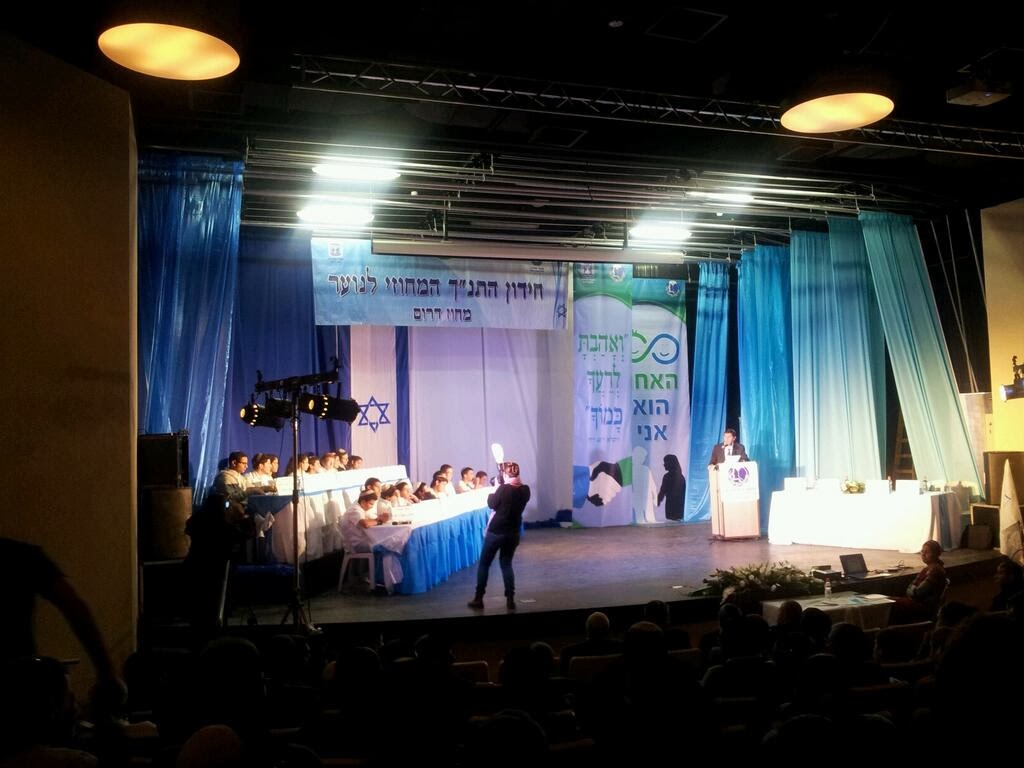 This past Saturday night, as I shut down the house for the night, I noticed a light in Bezalel's room. He was still reading, late into the night. When I walked in, I caught him reading...my Tanach. That's when I realized just how invested he was in the Chidon.
Each school that participates in the Chidon gives a written test on the material specified by the Ministry of Education. Bezalel decided to study, and was one of three high school students from Tzvi Katif chosen to represent the school. (The other two later dropped out). Something about the Chidon lit a fire in him, and he began to go through the material for the regional Chidon (which was today).
The material included: most of the five books of the Chumash, Yehoshua, Shoftim, Shmuel, Melachim, parts of Yishayahu, parts of Yirmiyah, and Yonah (he thinks). Some of the material he had never read before, and now he was being asked to remember names, facts, cities, who killed whom, who was bald (and who wasn't) - any and every possible and imaginable detail included in the text.
The regional finals, which took place in Meitar, were actually in two stages. Forty kids took a written test, and eighteen were selected for the final, which was done orally, in front of an audience. Rena and I weren't sure whether to go or not. If he didn't make the cut, we didn't want to embarrass him. But there would be no way to know if he was in until the live program started, so we go in the car and drove to Meitar.
Right before they opened the auditorium, Bezalel sent Rena a text - he made it into the finals. Truth be told, we were genuinely proud that he had worked so hard to get as far as he had. We had not prodded or pushed in the least. It was entirely his initiative, and he worked very hard, pushing off other tests and quizzes to study for the chidon. The Ministry of Education had even set up a website which was optimized for mobile phones, so students could quiz themselves with sample questions.
Walking into the auditorium, I was immediately impressed with the scale of the program, and the investment that the Ministry of Education made in the Chidon itself. This was one of seven regional finals, and yet the stage was decorated with banners, there was full professional lighting and sound; it was the full show - at the local level.
They had even produced mini videos that they were supposed to show before each group of questions. The first set was about Plishtim - and they had produced a four minute video about a Plishti warrior who stops at a local kiosk and orders lunch. It was clever, and not cheap. I've been doing some research for Orot on the costs of producing videos. They had prepared about five or six videos, so it was clear that a good deal of investment went into this program. Sadly, because we started late, and the videos had no real bearing on the quiz itself, they only showed the first video and skipped the rest.
There was even a musical program: kids on flutes; the local choir from the Meitar elementary school. (The first song that they song was the Chemed Song - did you know that there was a song about the Religious Zionist School System? Chemed stands for Chinuch Mamlachti Dati - Religious Zionist Education. Someone decided that they needed a theme song. For some reason, I really love the music video they put out...but I digress...)
Bezalel didn't make it past the first round. Truth be told, the questions were really, really hard. Here was Bezalel's question (each child got the question both orally, and in print in advance):

I had no idea about either part. For that matter, I couldn't really answer the vast majority of the questions.
Bezalel got the first question right. They were eaten by bears. (Who knew?) The judges also tried quite hard to help the kids find a correct answer. And when the crowd felt that a kid had gotten an answer correct that the judges didn't hear, they gave him credit anyway.
The questions only got harder from there, with time limits, and then lightening rounds, until two kids were left - and then finally a winner. They gave each finalist a small gift along with a rather nice Tanach, we sang Hatikvah, and then we had a minyan for minchah.
I left the auditorium with my spirits soaring. My son had competed in a well-produced Tanach competition sponsored by the Ministry of Education of the State of Israel. There was a crowd cheering the kids on; it was just such a special experience.
As the time since our Aliyah passes - going on almost six years now - life has, thank God, settled into a sort of rhythm. It's normal. So you tend to forget the things that brought you to Israel, and why you chose to leave a life in the United States and move halfway around the world.
Today was one of those days. Baruch Hashem.
Posted by Reuven Spolter at 8:53 PM

Email ThisBlogThis!Share to TwitterShare to FacebookShare to Pinterest
Labels: Aliyah, Life in Israel