Man's Seder Sweeping the Nation: Now in Chicago. Next Stop: Your City?

It started with a simple idea probably ten years ago. After my wife Rena returned home from a Federation-sponsored "Women's Seder" (complete with orange and obligatory readings), I wondered why they sponsor programs like that for women, but nothing for the men. After all, in many homes, the men lead the Seder. Shouldn't they spend some time preparing? Moreover, the Seder represents one of the most important family educational experiences throughout the Jewish year. Parents actually must sit with their children and talk (and read) about Jewish events. There had to be a program to get men ready for the Seder! Indeed, there was.
What gets men to come to anything? Torah? Sure. But what if you added steaks - really thick ones? (Remember that in Metro Detroit, good meat restaurants are pretty rare.) And what about beer? Men, like beer, right?
Turns out that they do. The idea percolated for a year, until I finally decided to inaugurate what has since become an annual event at YIOP: The Man's Seder. Here's the flyer from my last year. 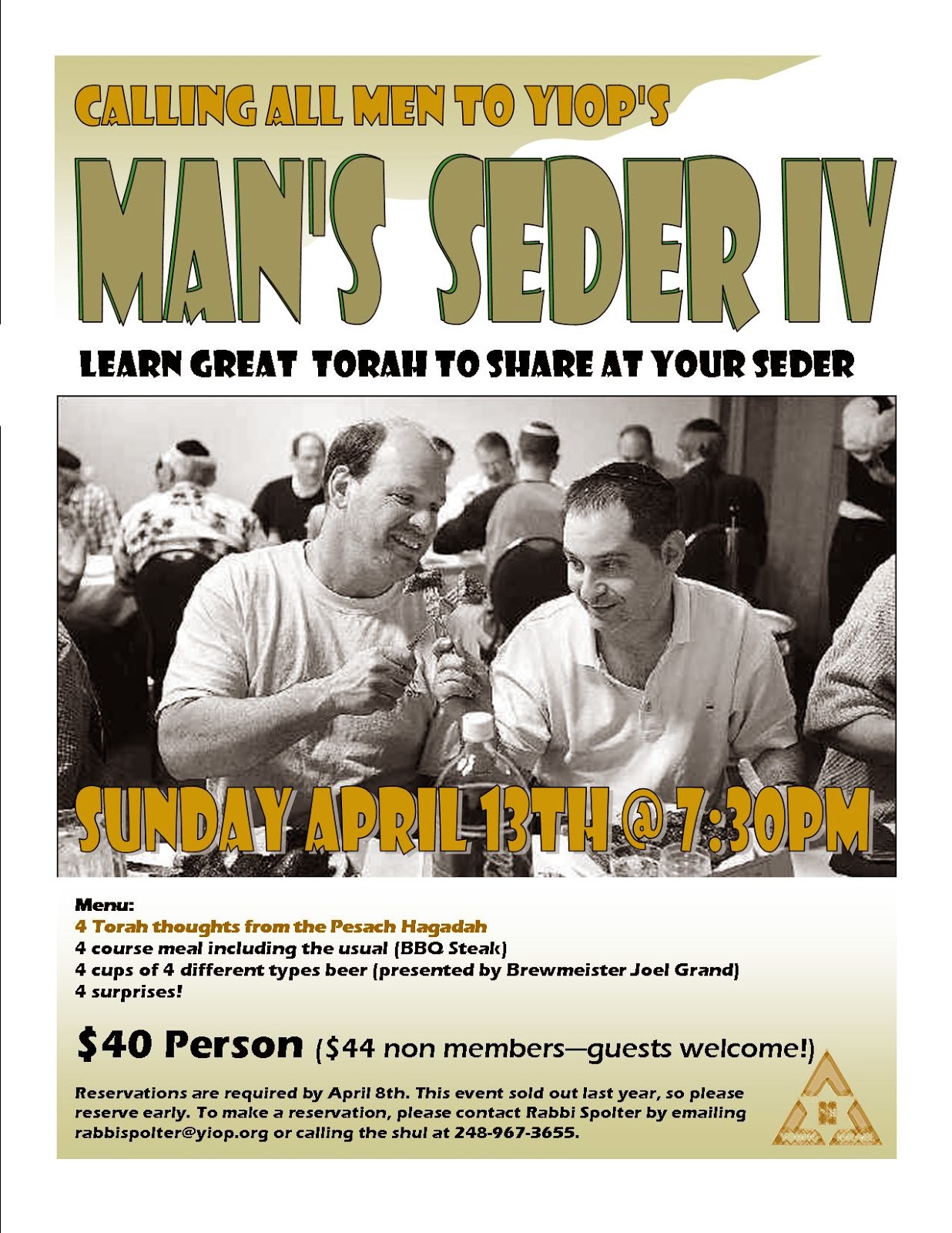 The event actually garnered a fair amount of Press. We had a great article in the Detroit Free Press our first year, and more publicity in the following years. Here's a piece from the Detroit Jewish News in 2008 (click on it to enlarge): 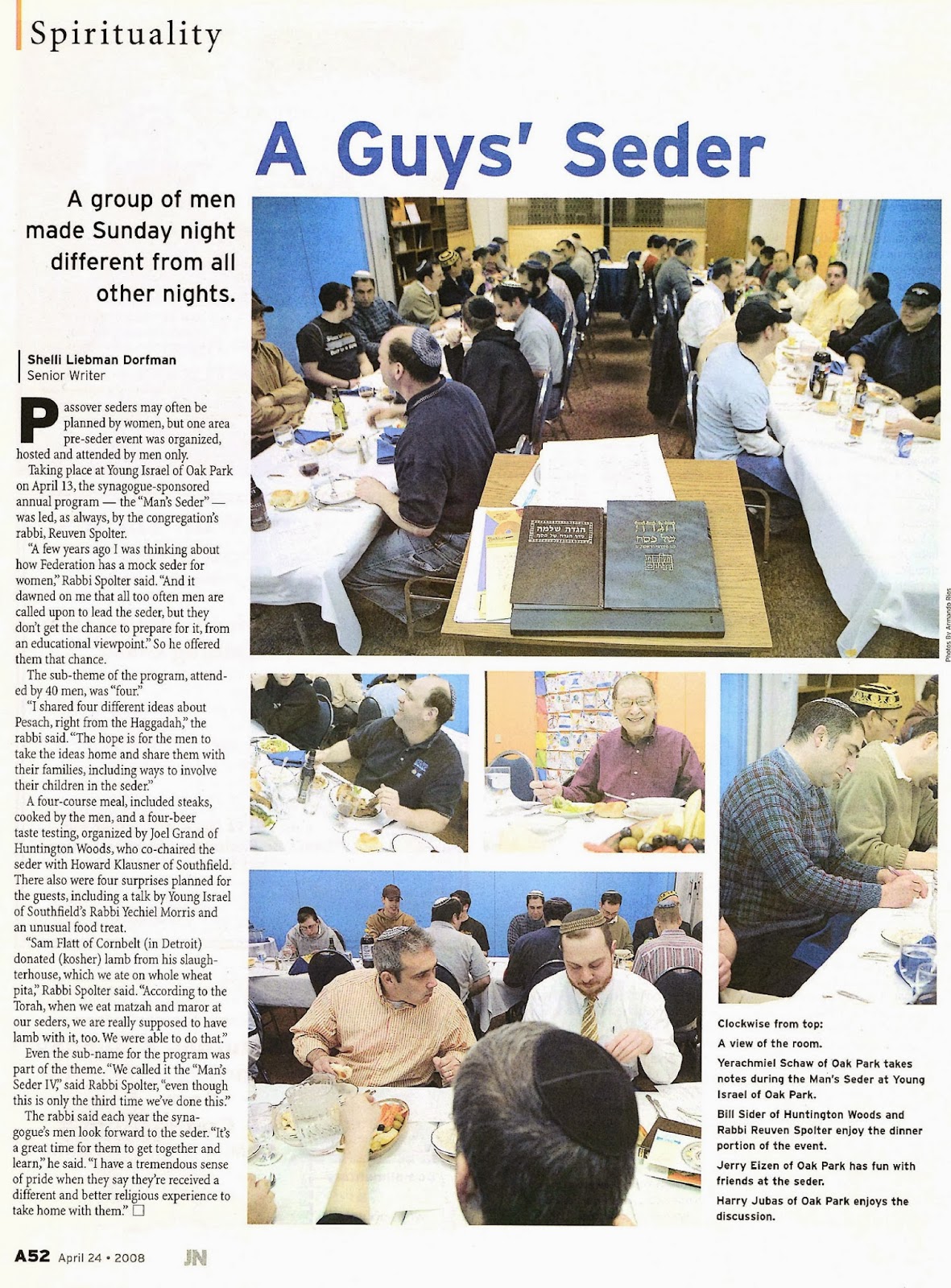 The program has spawned imitators and emulators, which I'm actually quite proud of. For years now, my good friend Rabbi Barry Gelman of the United Orthodox Synagogue of Houston has been conducting a Man's Seder (you can find some more great pictures from their Facebook  page here). Aish Detroit copied it almost immediately after I left. It's been popping up across the country. And now the Man's Seder, moving into the big time, is making its way to Chicago.
Apparently, Rabbi Ari Sytner of YU's Center for the Jewish Future, shared the idea for the Man's Seder at a lay leadership seminar. The idea took hold, and this year Congregation Or Torah will conduct its first Man's Seder. Only they've rebranded it, and are calling it: Four Cups. 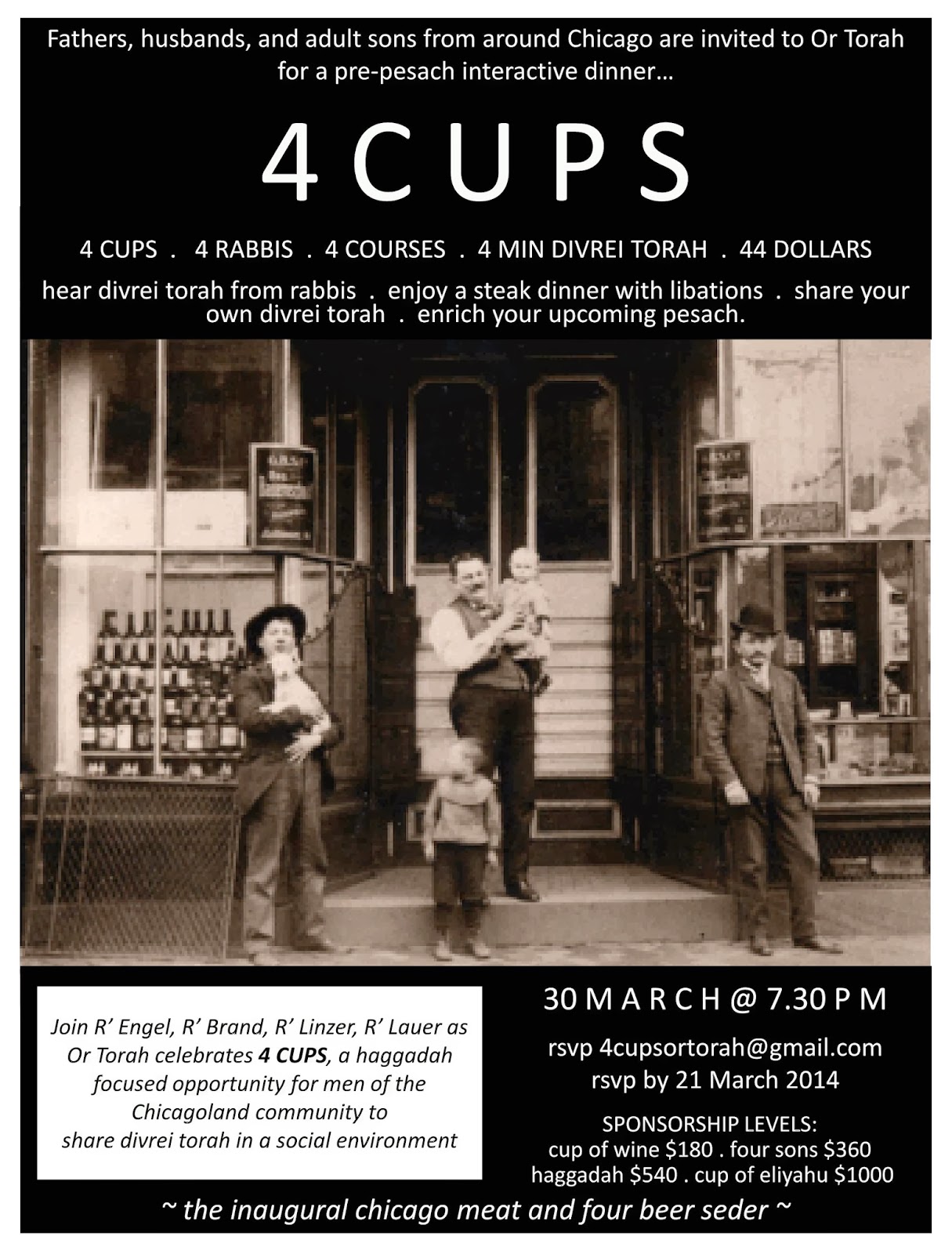 I love it. I love the upgraded graphics, and the Chicago tough-guy theme. I love the sponsorships (why didn't I think of that?) Most of all, I love the fact that a program I thought of is really helping spread Torah and excitement about Pesach.
So, if you live in Chicagoland, make your way to Or Torah for a great night of learning. And if you don't live in Chicago, share this blog post with your rabbi, ritual committee, education committe, Men's Club - whatever. Man's Seder is sweeping the nation. Don't miss it!