The Decline of the Main Minyan 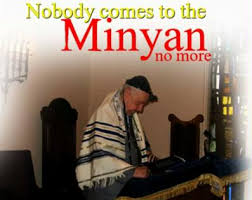 A short while back, Gary Rosenblatt’s column included a quote from Rabbi Stephen Listfield, who is serving this year as interim rabbi at a Conservative congregation in Massapequa, who said, among other things,


“If people who lead busy lives are going to come to a three-hour service in Hebrew at the same synagogue every Shabbat, they need to hear a message beyond ‘be a mensch.’”