Let it Go - and the Challenge of Modesty

Last night, the song "Let it Go" from the Disney movie "Frozen" won the Oscar for Best Original Song. I haven't seen the movie, but it has grossed over a billion dollars during the course of its Disney marketing bonanza. Moreover, the song has also gathered over a hundred million views on YouTube.
On last week's Slate Culture Gabfest, the hosts discussed the movie and song, and a specific ten second clip during which the protagonist, who is a kind of ice princess, decides that she needs to do what's right for herself, and "Let it Go" - stop acting out of concern only for the people around her. That's why, during the song, she builds herself an ice castle (or something like that...) Yet, towards the end of song, she undergoes a different type of transformation - one from a modestly dressed maiden to a slinky, Beyonce-type fashionista (who sashays sexily). 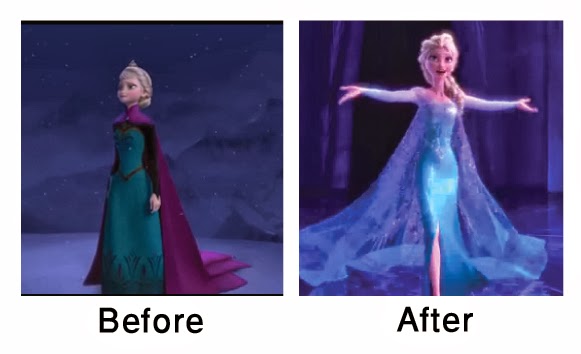 The feminist voices on the podcast loved the movie, but felt that the transformation was entirely against the movie's ethic. Why, if she really is doing what she wants, does she suddenly transform herself into Hollywood's idea of a diva?
I wonder about something else? How does this transformation affect the image of young girls and what they expect of themselves? This isn't a new issue, of course, but clearly the "before" wasn't nearly good enough.
When our daughters dress themselves up this Purim, which costume will they want to wear: the one on the left, or the one on the right?
Posted by Reuven Spolter at 7:00 PM

Email ThisBlogThis!Share to TwitterShare to FacebookShare to Pinterest
Labels: Modesty