Unraveling the Puzzle of Megillat Esther 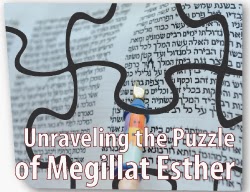 Megillat Esther is a brilliant work.

On the one hand, it masterfully and suspensefully relates the Purim story - a story we all know. Yet, like all great books, each re-reading offers a new and unexpected pleasure. I still get a kick out of how the Megillah refers to "all the people who loved [Haman], and Zeresh, his wife." (5,10)

But, as we know, the Megillah is much more than that. Woven into the fabric of the work - hidden beneath the surface - like Esther's Jewish identity, is a core of religious identity and belief essential to our identity as Jews.

Therein lay the brilliance of Mordechai and Esther: On one hand, they wrote an entirely secular story which they spread across the known world. But, read with the proper perspective, that very same work represents a core religious Jewish text.


I'd like to give one, very simple example of how Chazal read the book of Esther.

A very famous gemara in Shabbat (88a) relates that the Revelation on Har Sinai was a bit more dangerous than we might have considered:

Said Rav Acha bar Yaakov: From this [statement] there is a great criticism against the Torah (Rashi - because the Jewish people were forced to accept the Torah).

Said Rava: Nonetheless, they later accepted [the Torah] during the times of Achashveirosh, as it is written, "The Jews fullfilled and accepted" - [this means that] they fulfilled what they had already accepted.


This short piece of Aggadah is rich with meaning, and raises many important questions. Yet, I'd like to focus on the final statement of Rava who derives the fact that the Jews willingly accepted the Torah during the times of Mordechai and Esther from the words קימו וקבלו היהודים - "the Jews fulfilled and accepted."

How does Rava arrive at his conclusion? Where does he see this deeper meaning hidden in the text? The answer is, in fact, right before our eyes, if we know how to properly piece the puzzle together.


In the text of the Megillah, the verse cited seems to have nothing to do with the Torah at all, but instead seems to be about the acceptance of Purim.


Yet, when we consider the verse (and the phrase at hand) one of the words seems unnecessary and unusual. Why does the verse say that קימו וקבלו - "they fulfilled and took upon themselves" when it could have simply said, קבלו היהודים עליהם ועל זרעם - "the Jews accepted upon themselves and upon their descendants". What is the extra word telling us? How can one fulfill something before he even accepts it?

Yet, this very paradox reminds us of another, similar phrase found in the Torah:


וַיִּקַּח סֵפֶר הַבְּרִית וַיִּקְרָא בְּאָזְנֵי הָעָם וַיֹּאמְרוּ כֹּל אֲשֶׁר דִּבֶּר ד' נַעֲשֶׂה וְנִשְׁמָע
And [Moshe] took the Book of the Covenant and read it in the ears of the nation, and they said, 'Everything that God said we will do and we will hear."


It's precisely the same progression:

This, I believe, is exactly what the authors of the Megillah were hinting to at the conclusion of the Purim story.

They rechose, yet again, after the events of Achashveirosh. If we're going to suffer the hatred against the Jews, ought we not live by the values that God gave us as well?
Yet another piece to the Purim puzzle.
Posted by Reuven Spolter at 2:26 PM