Imagine I published an article about purchasing chametz after Pesach by explaining the following:

I know what you'd be thinking, because I'd be thinking the same thing: Two types? Isn't there a third type? What about the store owned by a Jew, which sold its chametz to a non-Jew?
To this, my answer would be:


Well, we think that the sale of Chametz is truly a non-halachic act. Let's be honest: both the Jew and the non-Jew have no intention of keeping the sale permanent, no matter how "official" they try to make it. It's simply a halachic loophole, and I don't think that it's legitimate. So I ignored mechirat chametz in my article.

You'd be incensed, and you'd be right to be angry. My article, by leaving out basic halachic information would paint an incomplete, and therefore incorrect picture, potentially causing untold financial damage to the poor Jewish store owner who dutifully sold his Chametz, as per his rabbi's instructions, only to be ignored.

And that, my friends, is exactly what Rabbi Yair Hoffman did this week in his Five Towns Jewish Times article entitled: Costco and Fruits from Israel. Rabbi Hoffman writes,


There are three categories of products of Israel.
1] Fruits from years 1 – 6 in the Shmittah cycle – where trumos and Maasors must be properly removed before the fruits are consumed. Believe it or not, Costco Clementine fruit is still from year six until the end of the winter. Peppers and cucumbers are a different story. Check with your local Rav or the Keren HaMaasros in Lakewood, New Jersey as to the specific dates of each vegetable or fruit.
2] Fruits that are from the Shmittah year – which may only be consumed by following the guidelines of treating fruit Bikdushas Shvi’is properly.
3] Produce of the Shmittah year that is forbidden in benefit
When the fruit is actually from the seventh year, new issues arise. Firstly, if one accidentally purchased seventh year fruit from Costco, then it is forbidden to drive them back to exchange them. Rather, they must be eaten wit Kdushas Shviis, a protocol of special treatment....
There are foods that are entirely forbidden in benefit. Some of the vegetables sold in Costco fall in this category. Check with the Keren HaMaasros as to which ones fall into this category.

Rabbi Hoffman omits an entire category of produce which comprises the vast majority - if not all - of the fruits and vegetables exported from Israel during the Shemittah year: Produce sold under the Heter Mechirah.


As it has done for each Shemittah year since the inception of the State of Israel, the Chief Rabbinate has arranged for the sale of much of the agricultural land in Israel, thus circumventing many of the prohibitions associated with growing produce in the Holy Land during Shemittah. To state the obvious, this sale is a matter of significant controversy both inside and outside of Israel. Many great rabbis have ruled that the sale of land in Israel is not permitted (and therefore invalid). At the same time, many great rabbis have permitted the Heter Mechirah, including the current chief Rabbis of Israel. In fact, the rabbinate has expended a great deal of energy, effort and resources to ensure that this procedure is done properly and effectively, and has published guides for farmers and consumers who wish to follow this ruling. 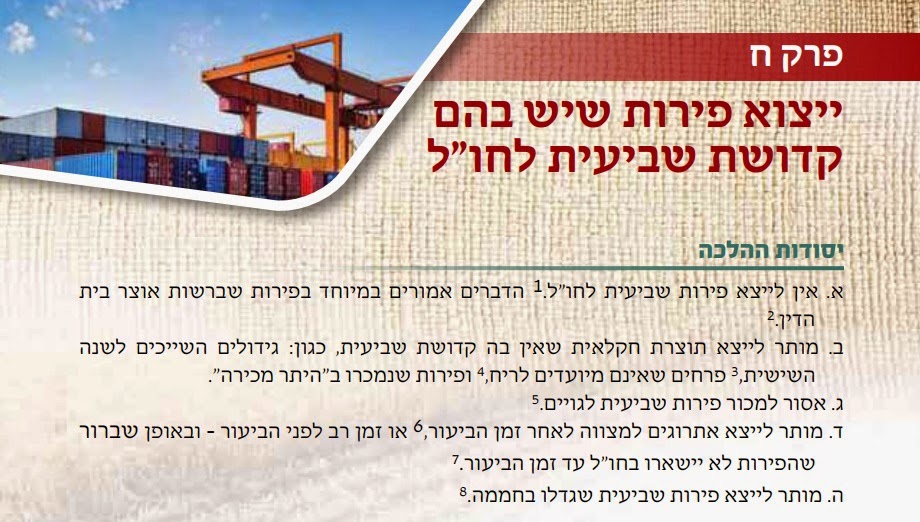 
1. One may not export produce of the Seventh year to the Diaspora. This especially pertains to produce under the auspices of Otzar Beit Din.
2. It is permissible to export agricultural produce that does not have the sanctity of the Seventh year, such as: produce from the sixth year, flowers not grown for their scent, and fruit grown through the "Heter Mechirah."

Thus, according to the Chief Rabbinate of Israel, produce grown under the Heter Mechirah does not have the sanctity of Shemittah, and can be exported from Israel. Moreover, for this reason one also does not have to separate Terumot and Ma'asrot, as the produce is considered devoid of sanctity.

Must Rabbi Hoffman agree with the ruling of the Chief Rabbinate? Of course not. But his article ignores the Heter Mechirah completely, as if it doesn't exist. That's both disingenuous, and dishonest.

Should you buy Heter Mechirah produce sold at Costco? Truthfully, you should ask your rabbi. I would. I do. (not at Costco - but here in Israel). I also feel that a Jew should make an effort to try and purchase products, including produce, from the Holy Land. Yet, rabbis that write about purchasing Israeli produce should include information about the Heter Mechirah in order to give readers the complete halachic picture.

UPDATE (and a pretty important one at that) - When I wrote this piece, I also sent an email to the office of the Chief Rabbinate, looking for information about the Heter Mechirah status of produce exported from Israel, and I couldn't find any reliable information on the web. It turns out that there's a good reason that I couldn't find any information: there isn't any. I got the following response via email today:

Oy. It seems I owe Rabbi Hoffman an apology. Unless there's a way to find out where the Israeli veggies came from (and whether they were grown under the Heter Mechirah), you must treat the produce as if it's Kedushat Sheviit. I will write in an upcoming post how to buy (and eat) this produce.
Posted by Reuven Spolter at 2:18 PM

Email ThisBlogThis!Share to TwitterShare to FacebookShare to Pinterest
Labels: Shemittah