Elli Fischer has written a fascinating an important article on some of the hidden costs of Modern Orthodoxy in America. He notes that the exorbitant costs of day school tuition force parents towards careers such as law, finance and medicine, that allow for the possibility of paying Jewish day school tuition without having to apply for scholarships. One of these costs is the near absence of a creative class. He writes,


That is, the pressure to produce high earners discourages and marginalizes those members of the community whose calling is in music, literature, the visual arts, or the performing arts. The problem is not only that creative types will likely be unable to afford the Modern Orthodox lifestyle; the community itself tends to marginalize those who pursue artistic careers, viewing them as irresponsible. Some creative types will gravitate toward the rabbinate or Jewish education, careers that can offer a creative outlet, financial incentive in the form of tuition reductions, and social acceptability. Many will either give in to the pressure to pursue a stable, lucrative career, or leave Orthodoxy behind.

It's difficult to measure the importance of creativity to a community, society or individual. Yet, creativity clearly plays a critical role not only in personal development, but in communal health and expression as well. Fischer notes that in Israel, where tuition is free, creativity plays a much larger role in Religious Zionist society. I completely agree with him, and would like to elaborate.
Just off the top of my head, I can think of a number of different areas where creativity plays a fundamental role for communal expression. 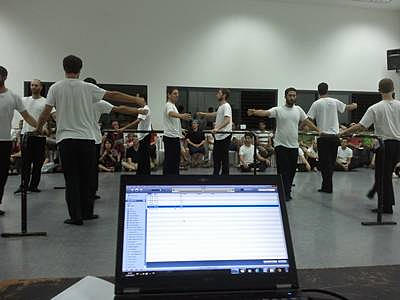 Dance: I work at the Orot College of Education, a Religious Zionist teachers' college with campuses in Elkana and Rechovot. The women's division boasts the only religious education program for dance teachers. We train religious women who will be the dance teachers in religious schools around the country. Earlier this month, Orot hosted the second annual Dance Education Conference in the Religious Educational System (Chemed - chinuch mamlachti dati), where over 400 participants (students and teachers) representing fifteen different schools from across the country gathered to watch, learn and enjoy experiencing different types of dance. I was invited to watch the only program by men of the day, a twenty minute piece by the only religious male dance troupe in the world (that I know of) called "Kol Atmotai Tomarna". I admit that t was not for me. But I fully appreciated that they even exist. I cannot imagine such a group existing in America.

Film and Television: By now, many of you already know about the Ma'aleh film school, and Orthodox school that trains future filmmakers. But many people don't also realize that schools of education, including Orot (we actually just celebrated the release of two new student films this week), but many others as well, train high school teachers who run programs in film, giving high-school age children the tools and creative outlet to express themselves through video and film. It's incredibly empowering for them, and some actually do move on to careers in film. Even the local yeshiva in Yad Binyamin called Torat Hachayyim (which moved quite far to the right after getting kicked out of Gush Katif years ago) opened a school of film and drama, as they appreciate that the very best way to influence the next generation is through film, drama and television.


Art and Drama: There's a growing list of religious drama troupes, the most famous of which led by Chagai Luber called Aspaklaria. These groups put on productions about challenging issues in the religious (and general) community, using the arts to shine a light on life, and allowing us to view ourselves and others from an outsider's perspective. Moreover, many of these actors also engage in skit comedy as well as playback theater, and perform for schools, groups and communities, using the arts to convey messages, address interpersonal issues - but all using the cultural language of the religious community. Last month I joined my son Bezalel at his school for one such evening, in which a comedy duo performed a number of skits about the relationships between parents, children, teachers and school. The evening featured no follow-up discussion whatsoever. The Rosh Yeshiva felt that the skits spoke for themselves, and offered enough food for thought to allow us to follow up with our children on our own.

Creative Arts: Aside from the famous Israeli art schools, other schools exist (again a school of education) that focus on Art Education and training teachers to teach with art, theater and graphic design, again all under religious auspices.


Music: My son is taking music lessons with a teacher who's studying at a new religious music school in Givat Washington, a short drive from here. His teacher is great - and while I like him to do classical pieces, he prefers to give him jazz, blues, and anything else he can think of. He's now suggested that my son come to the school one day a week and join an ensemble. After all, he told me, exposure to other musicians is the best way for him to grow.
But it's much more than music school. Israeli music - Jewish music - has a range and quality that is almost nonexistent in "classical" Jewish "yeshivish" music (which is the main reason that I can't listen to it anymore). When was the last time you heard a good "Jewish" song in English? They've gotten so corny, and just plain bad, that they've stopped writing them.
This richness expresses itself in performers who express the joys, pain, challenges - whatever - of the religious experience into music. Sure, Avraham Fried is quite popular in Israel. Again, not my taste. But so are Yonatan and Aharon Razel. And the popular "American" Jewish music band Moshav Band are really all Israeli. And Shuli Rand. Wow. For most Americans, the Hebrew is too fast, and too complicated. But wow. Just wow. His first album expresses so many powerful religious feelings in such sophisticated ways, without resorting to quoting a verse from Tehillim over and over and over again.

Other categories that I haven't mentioned include comedy and literature, but you get the point. I don't want to give the wrong impression. I'm not at shows and exhibits and book discussions each and every week. Far from it. But I appreciate the fact that cultural offerings are not only available in Israel, but that they speak from, and to, my personal experience, and carry a power and speak to me in a way that non-religious, secular culture never could.