How Not to Parent: Never say No. 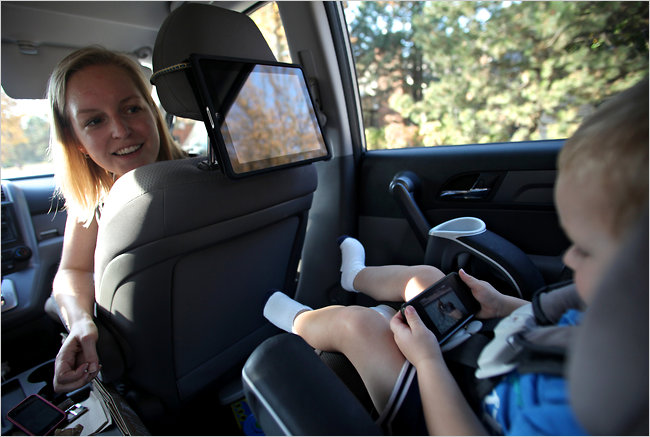 The New York Times just featured a troubling article about how parents are now using iPhones to occupy and babysit their children. What's troubling about giving a child an iPhone to play with? It's not the end of the world - within reason. And I quote:

Brady Hotz, who will be 2 at the end of this month, was having a hard time getting out the door of his family’s home near Chicago the other day. He’d woken up late — 6:45 instead of 6:15. His mother, Kellie Hotz, was in a rush. She got him dressed, gave him milk and cereal, and announced, “We’re ready to go.”
Brady, not budging from his position near the couch, dug in. “Mickey!” he said plaintively. “Mickey!” (Translation: I’m not going anywhere till I get to watch “Mickey Mouse Clubhouse” on TV.)
Ms. Hotz, a veteran of such standoffs, switched instantly to what she called her “guaranteed success tool.”
“What about Mickey on the phone?” she suggested.
That’s all it took. Mother swept up the now entirely cooperative toddler, cued up the show (via YouTube) on her little iPhone screen, and strapped him into her car, where he sang happily along with the video for the 15-minute ride to day care.
Then trouble began again. Brady wanted to stay in his seat with the iPhone. Finally he put it in his coat pocket and went inside — where Ms. Hotz was able to surreptitiously reclaim her gizmo and leave for work.

Let me get this straight: first the child refuses to go to daycare without watching his favorite show in the morning. The kid is two. So, instead of saying "no" and establishing boundaries (and yes, even two-year-olds really get and need structure), his mom succeeded in bribing him by letting him watch his show on her iPhone. Then, when the kid would not return the phone, instead of again saying, "You know what, that's enough", and taking the phone, the mother got the kid to put the phone in his pocket, and then stole it back.
Lessons son learned that morning:
1. Stubborn behavior gets rewarded.
2. Tantrums have desired effect.
3. When you can't honestly get what you want, steal, lie and cheat to do it.
Sadly, while the story purports to be about the iPhone, it's more of a story about parents' unwillingness or inability to parent - either by paying attention to their children instead of passing them off to an electronic device, or by setting boundaries of acceptable behavior for children. Also, if you look carefully at the picture, you'll see that not only does little Brady have his mom's iPhone; he's also got an iPad set up for him in the car (just in case he needs to watch a second show at the same time, I guess).
Right now, the iPhone might be a "guaranteed success tool." But in parenting and raising her son, it's quite the opposite: a recipe for failure.

Posted by Reuven Spolter at 6:48 PM