The Latest Song Craze Here in the Holy Land 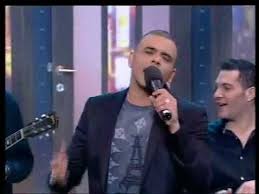 It started with Simcha, who learned the words first. Then, somehow, Petachya picked it up, and now the kids won't stop singing this song. As you listen, you'll notice that it's basically a hip-hop song that you'd expect to hear in a disco (From what I know. I don't frequent such places. Too old.). But then, if you listen to the words, you realize that there's something much deeper going on in a song from a seemingly secular Israeli pop star. I can't embed the song (it's been disabled, but you can watch and listen to the song here (live) and here. The lyrics are as follows (with translation):

בכל מקום כל הזמן
יש לכולנו מגדול ועד קטן
ימים יפים וגם פחות
וביניהם תשובה לכל השאלות
In every place, at all times,
we all, from young to old
have good days, and also less [good]
and in between them the answer to all the questions

יש אלוהים אחד גדול
הוא בעולם הזה נותן לנו הכול
בין אפלה לקרן אור
את הנתיב אנחנו רק צריכים לבחור
וזה ידוע החיים הם מתנה
הכול צפוי והרשות נתונה
there is One Great God
in the world who gives us everything
between the darkness and the ray of light
we only need to choose the [proper] path
and it is known that life is a gift
everything is expected, and the permission is given (that's a quote from Rabbi Akiva in Avot 3:14)

(Refrain)
מי שמאמין לא מפחד,
את האמונה לאבד
ולנו יש את מלך העולם
והוא שומר אותנו מכולם
He who has faith is not afraid
of losing that faith
and we have the King of the World
and he guards us from them all

(Second Stanza)
העם הזה הוא משפחה
אחד ועוד אחד זה סוד ההצלחה
עם ישראל לא יוותר,
תמיד על המפה אנחנו נשאר
וזה ידוע החיים הם מתנה
הכול צפוי והרשות נתונה
This nation is one family
one plus another one is the secret to success
we will always remain on the map
and it is known that life is a gift
everything is expected, and the permission is given

The words are surprising, even shocking, coming from a seemingly secular Israeli, and they clearly have touched a nerve in Israeli society. I have long believed that most, in fact the great majority of secular Israelis - are not as secular as we might believe. The cab driver who picked you up puts on tefillin each day. The secular lady you work with shares Shabbat dinner with her elderly mother each week. There's a tremendous amount of faith in this country that's looking for an outlet, if only we can find a way to tap into it. Not every song on YouTube gets 2.5 million hits.
There's also clearly a strongly political (and geopolitical) aspect to the song. "We will always remain on the map" clearly alludes to the Iranian threat, and the Jewish response not only of military strength, but also faith in God. I find it refreshing and quite powerful to see a spiritual response come not from the frum, but from the secular community. (You can also clearly hear the Breslover refrains of והעיקר לא לפחד כלל" - "and the essence is not to be afraid at all!" as well)
It's a catchy tune that kids really latch onto. If you teach in a Jewish school, would you teach it to your students? It's a great lesson in faith, in Hebrew, and also about Israeli society: secular, religious, faithful, Breslov - all mixed into one messy song.

Email ThisBlogThis!Share to TwitterShare to FacebookShare to Pinterest
Labels: Faith, Life in Israel