In the New York Times, Some See Manufactured Controversy 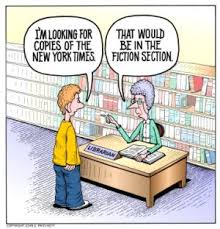 Is the New York Times biased against Israel? Some would say "yes." I base this on my ability to find at least one person who takes each side of the issue. Wait, you might wonder. Is that really fair? After all, if a hundred people think the Times is fair, but only two think it's biased, my description doesn't really reflect the true picture!
Some might have a problem with my headline, but not the New York Times. How do I know? It can't bother them that much, because they seem to have no problem using this troubling journalistic tactic when writing about Israel.
Take this article from today's Times: "Remembering Rabin, Some See His Legacy Fading". Again with the "some." How many is "some"? Do they reflect a significant trend in Israeli society, or is this just a convenient way for the Times to gin up an issue? Some would like to know.
In fact, the article itself alludes to the fact that this is a created-controversy.

But with the failure of the Oslo accords, the violence of the second Palestinian uprising in 2000, the withdrawal from Lebanon that increased Hezbollah’s power and the rise of Hamas in Gaza after Israel pulled out, land-for-peace is viewed with skepticism by a rising portion of the Israeli public.

Reading between the lines, it's clear to Israelis that the Arabs don't want peace, and only viewed land-for-peace as a tactic to acquire land, so that they could then fight for more land. Israelis don't view the Palestinians as serious about wanting peace with us (they'd rather reach consensus with Hamas - who at least say openly that they want to kill us, than sit down seriously with Israel). So why in the world would we waste time trying to negotiate with people who have no serious interest in negotiation? (Unless someone was pressuring us to do so.) "Some" might wonder about a NY Times article lamenting the decline of the left-wing in Israel and its politics.
What about this article: "Some Question Insistence on Israel as Jewish State"? You would think that the article would be about a strong internal debate about whether Israel should be a Jewish state or not. But that's not the case. The article itself says so, telling us that,

Many Jews in Israel and beyond consider it essential that they are recognized not just as members of a religion but also as a people with historic rights to a sovereign state in the Holy Land. The issue, they say, goes to the core of the conflict and will serve as a litmus test for Palestinian intentions.
“Only when our peace partners are willing to recognize the legitimacy of the Jewish state,” Mr. Netanyahu said Friday at the same conference, “will they truly be prepared to end the conflict and make a lasting peace with Israel.”

What does it mean that "many" Jews think that Israel must be Jewish? Didn't the headline tell us that "Some" question that fact? Could it really be "most" vs. "almost none?" But that wouldn't make an attractive headline which grabs our attention and page views.
Most (and by that I mean pretty much everyone) in Israel takes it as a given that Israel is and must be a Jewish State (Other than Ahmed Tibi. He's not so sure.) The real question - the burning question in Israel right now, is only alluded to later on in the piece.

There is no consensus even within Israel on the meaning and nature of a “Jewish state.” For many Israelis, it describes the country as it is: with a Jewish majority that speaks Hebrew, living in a dominant Jewish culture. Some would like to see a more religious element; others worry that it denotes an ethnocracy.

That's the burning question. What does a "Jewish State" really mean? How Jewish should it be? Does it mean that we should make bagels and lox (which nobody but Americans eat here) and Matzo Ball soup the national foods, and leave it at that? Or perhaps the government should observe all Jewish holidays and maintain kashrut (which it does)? Should the country promote Torah study (does that too) or just promote the ideas of Jewish identity and heritage (ditto)? These burning questions really do occupy Israeli society today. (My wife Rena returned yesterday from her continuing education courses at a local college talking about a symposium on campus which discussed the need to inculcate Jewish identity in the secular Israeli classroom.)
These critical issues might be the honest subjects of debate and discussion here in Israel. But the NY Times really isn't interested in them, because only "some" would actually care enough to take a deeper look. Instead, it's far better to manufacture a controversy, quote an individual or two who take the contrary position, and write an inflammatory article describing a non-issue.
"Some" would call that journalism. Just not me.

Posted by Reuven Spolter at 9:47 AM