Had You Heard about Reboot? Neither did I? 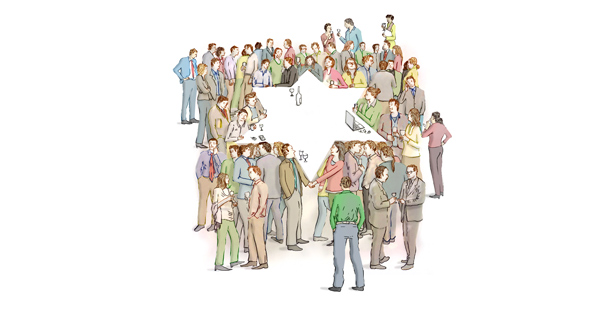 As a former pulpit rabbi, I am often seen strolling around Yad Binyamin in my rabbinic garb. No, I'm not describing a dark suit or black hat. Rather, I'm referring to the large stock of Timberland jackets that I accumulated over the years from seminars I attended at the Soloveitchik Institute in Boston and later at the CJF Rabbinic seminars across the U.S. The jackets, always donated by the generous owner of Timberland, are still some of my favorite items of clothing, and as the years progressed my jacket collection grew steadily. The piece de resistance was clearly the down winter parka we all received one snowy winter.
And then, when the downturn hit, the jackets rightly stopped. Funds were scarce, and while YU never paid for the jackets, the money was needed in other areas. Nowadays, every worthy cause pinches pennies, and stretches its dollars as far as possible. All, it seems, except one.
The New York Times recently did a writeup of Reboot, an amorphous Jewishy program aimed at connecting Jews to whatever Judaism they want to connect to. Aside from wondering about the effectiveness of the program, and the exclusivity of inviting forty important people a year, the budget seems staggering. And I quote:

“Our goal is not to get the 40 most successful people,” said Roger Bennett, a founder who lives in New York and is senior vice president at the Andrea & Charles Bronfman Philanthropies, an initial contributor to Reboot that now has 18 donors and a yearly $1.8 million budget.

What? Did they say $1.8 million a year? For forty people? What does that money pay for exactly?

Ms. Soloway and Ms. Subrin arrived separately on Friday, May 20, 2005, at the five-star Stein Eriksen Lodge. (Other attendees that weekend were Jonathan Abrams, who created the social networking site Friendster, and Jessi Klein, now a writer for “Saturday Night Live.”) Conference organizers chose Park City (Utah) because there are direct flights to the area from both coasts. Accommodations were luxurious: deluxe suites with down pillows, bathtubs with whirlpool jets and twice-daily maid service.

Really? Because last I checked, Newark, NJ also has direct flights from both coasts. Could it be that they chose Park city more for the down pillows and "twice-daily maid service"? (Twice daily? How dirty can a room get in half a day?)
I'm all for Jewish rediscovery. In this age of intermarriage and incredible assimilation, I'm open to trying anything. But $1.8 million for forty people a year? Imagine what Rabbi Shlomo Einhorn of the West Side Institutional Synagogue could do with $1.8 million. (on JM in the AM, it was pretty clear that his Rock and Roll Shabbaton was a sellout. Yes - a Rock and Roll Shabbaton. What do you want? It's the Upper West Side?) I have no idea what he'd come up with, but it's a sure bet that he'd affect more than forty people a year.

Posted by Reuven Spolter at 7:49 PM