The IAF on Sixty Minutes

Did you see this video on 60 Minutes? If not, you should. It's very impressive.

Posted by Reuven Spolter at 5:21 AM No comments: 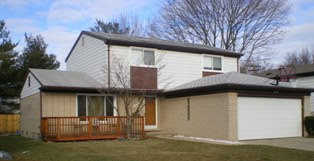 We're making aliyah this summer, so we're putting our house up for sale by owner. Our home is located in the heart of North Oak Park, in a section I like to call "Kollel Heights". It's just a five minute walk from many local shuls, and only seven-tenths of a mile from Young Israel of Oak Park. The house has a number of great amenities, and we've kept it in great shape.

Posted by Reuven Spolter at 4:46 AM No comments:

Email ThisBlogThis!Share to TwitterShare to FacebookShare to Pinterest
Labels: Personal

A Crazy Phone Message on My Machine

I got this message on my answering machine over chol hamoed. I have no idea what to make of it. Do you?
Posted by Reuven Spolter at 5:17 PM No comments:

Your Life or a Black Hat During Davening 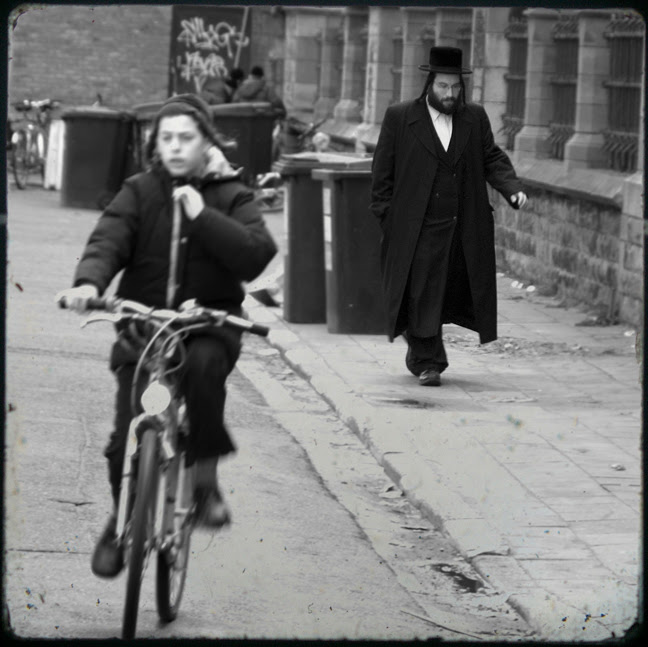 Between Minchah and Ma'ariv this evening, I spoke about the prohibition of writing on chol hamoed, and the tension between the prohibition of writing as stated in the Shulchan Aruch and our general laxity regarding the prohibition. After all, if I feel the need to write for practically any reason, one can easily justify that need as either צורך -- a necessity for the chag, or מעשה הדיוט - the act of a layperson -- or both.
In any case, after Ma'ariv a wonderful young teacher in the community approached to briefly discuss the topic. "I was sitting outside my house today working on my classwork," he told me, "and I wondered whether I should perhaps not be writing in such a public manner. While I know that I'm writing limudei kodesh, my students might not, and they might think that one is permitted to write anything on Chol Hamoed."
I agreed with him, and we walked out of shul together. As we left we realized that both of us had ridden our bikes to shul for davening. (With gas prices skyrocketing out of control, every little bit helps.) The only difference between us was that I was wearing a helmet, while he was not.
I let him have it - the poor guy. (Unbeknownst to him, helmet-wearing is a particular pet-peeve of mine, and I have spoken about it from the amud in shul on a number of occasions. For a number of years I as I drove around the community I would randomly hand out coupons for free Slurpees to kids who wore their bike helmets -- until 7-11 stopped sending us the free tickets.)
"How can you ride your bike without wearing a helmet?" I attacked.
First he tried explaining that he only rode on the sidewalk, so he didn't need one. I'm not sure where he got that idea from, as one can clearly reach dangerous speeds riding on a sidewalk, and even at slow speeds suffer severe head trauma from a bicycle spill.
His real answer was simple - and obvious from the hat on his head. He needed to wear a hat during davening, and there was no way to ride the bike with a helmet and also bring the hat. He feared that his students might see him davening in shul and think that he only wore his hat in school, and not at other times. So he chose the bike over the hat.
And what example, I asked him, does this set for your students about wearing a helmet when they ride their bikes? Do they know that you're only riding on the sidewalk? If you're concerned about maris ayin on the possible d'rabbanan of writing on chol hamoed, shouldn't you be far more concerned about maris ayin on sakanas nefashos?
In truth, I don't want to seem overly critical of this rebbe, who I love and respect very much. I just wonder how wearing a black hat during davening can become a greater concern than wearing a bicycle helmet. Am I overreacting? Is it just because I don't wear a hat -- so I don't understand?
Posted by Reuven Spolter at 3:51 AM No comments:

I Didn't Make the List. And We Don't Have a Pope

For all of you out there who think that I'm the greatest thing since sliced bread, I have bad news for you: Newsweek has once again served me a thick slice of humble pie. For the second year running, I did not make Newsweek's list of the fifty most influential rabbis in America. Even more frustrating, nor did I make the new list of the top 25 pulpit rabbis in America. (my good friend Rabbi Asher Lopatin of Congregation Anshe Shalom in Chicago did make it, right below Amy Schwartzman of Virginia and Terry Bookman of Florida. Kudos to him.) I admit it: I'm bitter. What can I do to improve my rankings for next year? Clearly blogging isn't the answer. Nor is teaching Torah, giving drashos, or ministering to my members. I obviously need to be flashier, generate more publicity, and probably be considerably more liberal, judging from the people that did make the list.
In any case, this list - and the Catholic Pope's upcoming visit to America got me thinking about whether we'd be better off if we really had a chief rabbi that represented Judaism, if not Orthodoxy. Whether people like him or not, agree with him or not, they get really excited when the pope shows up. They consider it a religiously invigorating event. Granted, the chief Rabbis of Israel do exist, but they fill political posts, subject to the whims and wishes of power players in Israel.
What if we had someone who had the ability to unite -- and speak for - the American Jewish population, the way the Chief Rabbi does in England, eloquently, passionately and powerfully. Would that not be a kiddush Hashem for the Jewish people, and advance the cause of Torah Judaism?
At least then we'd know who was on the top of our list.
Posted by Reuven Spolter at 9:58 PM 1 comment:

Words -- especially in Hebrew, have the power to convey deep and thoughtful ideas. We find this principle evident in this week's parshah.
When describing the affliction known as tzara'as, the Torah uses the word נגע -- (pronounced nega) meaning affliction. When someone "comes down with" tzara'as the Torah describes it as a נגע צרעת -- "a touch of tzara'as". (Isn't it interesting that in American vernacular illness is coincidental, whereas from the Torah's perspective, it's the touch of God.)
I saw in a book called Orot Zion written by Rabbi Yadger that the word נגע shares the same letters as the word ענג, (pronounced oneg) meaning "pleasure". In fact, Judaism often describes the day of Shabbos as ענג -- a type of spiritual pleasure and nirvana that one gets from basking in the glory of God.
One who guards and keeps the Shabbos takes the inert nature of the world and transforms that material into immeasurable spiritual pleasure. Conversely, the leper -- by speaking slanderously about his fellow man -- takes that very same potential pleasure in the world and tragically transformed into sickness and darkness. The world - and the way we interact with it -- returns back to us whatever we give it. It can return to us either ענג or נגע -- pleasure or affliction.
It all depends on how we use it.
Posted by Reuven Spolter at 3:07 PM No comments:

Looking for even more Pesach information on the internet? Want links and other information? Here's a list that I've put together for you:
1. OU Pesach Website
2. CRC (Chicago Rabbinical Council) Web Info
3. Erev Pesach that Falls on Shabbos by Rabbi Spolter
4. Rabbi Spolter's Top Ten Pesach Questions from YIOP's April 2008 Bulletin
5. Audio Link of Rabbi Spolter's Pre-Pesach Preparation Class
6. The KosherGram for Pesach from the Detroit Vaad
Posted by Reuven Spolter at 10:49 PM No comments:

Email ThisBlogThis!Share to TwitterShare to FacebookShare to Pinterest
Labels: Pesach

I Want It All - A New Commercial, But an Old Tune

A few weeks ago for Parshat Tzav, I gave this drashah in shul about the lack of modesty in America today from a financial point of view, which has led to the terrible financial crisis that has plagued this country and put us on the brink of recession.
Today I was watching Sports Center while working out and saw a relatively new commercial from Chase Bank. In the Chase Credit Card commercial, a wife has had it with their family television. She says to the man "You're right, we need a new TV." He brightens up and goes shopping for a new HD TV. Then the music starts "I Want It All, and I Want It Now!" The commercial mentions "text chase" to get your balance and ends with the tag line "Chase what matters."
It's surprising to me that Chase is this blatant. It's bad enough that the guy -- and we -- want that TV so badly. But even more depressing is the fact that the guy needs to use his cellphone to text his credit card company to learn whether he can charge that much money to his card.
So he buys a TV that he really doesn't need with money that he can't afford.
And we wonder why we're in trouble.
Posted by Reuven Spolter at 2:48 AM No comments:

You know those crazy circus freak-shows where you pay a dollar to see the incredible tall man, the tiny short guy and the bearded lady? Have you ever actually been to one of those shows? Did the beard seem real? Well, the bearded lady appears in our parshah, and her beard is very real indeed.
The Torah tells us that, וְאִישׁ אוֹ אִשָּׁה, כִּי-יִהְיֶה בוֹ נָגַע, בְּרֹאשׁ, אוֹ בְזָקָן - "when a man or a woman has a plague on the head or one the beard." (13:29) Commentators including Rashi and others wonder why the Torah specifies the gender of the afflicted ("a man or a woman") when in other cases, the Torah identifies the afflicted simply as אדם -- "a person."
Ohr Hachayim, quoting Rashi explains that had the Torah not specified both genders, we would have assumed that while a plague on the head might be considered tzara'at in both men and women, discoloration of one's beards would only be tzara'at in men. For this reason, the Torah tells us that whether the beard-wearer be male or female, the plague on the beard would be tzara'at.
Even if the bearded lady's a fire-eating, sword-swallowing midget.
Posted by Reuven Spolter at 9:44 PM No comments: