How did Mordechai "know" what was going to happen? Why did he force Esther to push the issue with Achashveirosh, instead of letting things play out? The Malbim outlines some important rules for playing with history.
Click here to navigate to the shiur on YUTorah.org.

Did you know that this shiur is available as a free podcast on iTunes? Click here to subscribe - and leave a comment and rating so more people will find the shiur! Thanks!
Posted by Reuven Spolter at 9:02 AM No comments: 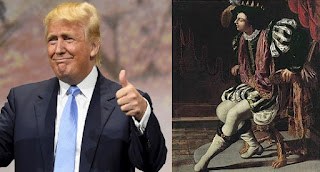 With the hysteria surrounding the sudden, seemingly inexplicable rise of Donald Trump, many left-leaning-liberals have sought to compare Trump to Hitler, the rise of the Nazis, or both Hitler and the Nazis (or Mussolini). In religious terms, there's a hysterical fear that Trump is Haman.
I don't see it. I find it hard to imagine that a man with an Orthodox Jewish daughter who he calls his "right hand man" is suddenly worse than Hitler. I also don't think that the knee-jerk hysteria really helps anyone, but that's another matter entirely.
If I were to compare Donald Trump to any figure in Megillat Esther, I'd have to say that Trump is King Achashveirosh. Consider the following:

This only begs the question: If Trump is Achashveirosh, what sort of character was the Persian king: Good for the Jews, bad for the Jews, or somewhere in between? As with all political analysis, it's impossible to know. Yet, I would like to suggest an interpretation based on a comment of the Vilna Gaon in the third chapter of Esther.

Fed up with Mordechai's refusal to subjugate himself and fueled by insane, anti-Semitic hatred and rage, Haman decides that the best course of action is to commit genocide, and wipe out the Jews. So he approaches the king and asks for permission to carry out his plan. Yet, when we look carefully at the language of the text, we find that he says one thing to the king, and writes something quite different in the edict he publishes to the world.

When Haman approaches Achashveirosh with his request to destroy the Jewish people, he describes the dispersed, unpatriotic nature of the people, he says that, אם על המלך טוב ייכתב לאבדם - which we translate to mean "If it please the king, let is be written that they be destroyed." While we know the full meaning of the word לאבדם - as he immediately sends out letters להשמיד להרג ולאבד את כל היהודים מנער ועד זקן - "tto destroy, to slay, and to cause to perish, all Jews, both young and old, little children and women on one day...", it is quite possible that Achashveirosh himself didn't understand his request in that manner. While לאבד means to "make lost" a nation, perhaps he understood the request in terms of their assimilation into the larger culture. After all, what king would want the nightmare of mass casualties and battles in the streets? Recent history has shown us that when you unleash unrest, you don't really know where things will lead.

This question takes on greater import especially in light of Achashveirosh's vitriolic protests at the second party, when Esther begs for her life and the life of her people. The king seemingly has no idea what she's talking about, wondering: מי הוא זה ואיזה הוא - "who and where is the person that would do such a thing?!" (Esther 7:5) I always assumed that the king is simply bluffing, pretending not to know what she's talking about. But is it at all possible that he really didn't know precisely what Haman was planning, and the scope of his wickedness?

This is especially interesting to me in light of the commentary of the Gr"a on this section, and especially the strange pesukim at the end of the section (3:14-15). The Vilna Gaon writes that Haman didn't publicize his full plans for fear that the Jews would exert political pressure to avert the decree. Is it possible that Achashveirosh - like many political leaders - said to Haman: "Do what you want. I don't want to know the details." And that he really didn't know - putting him in a very different light than we normally see him.

According to this interpretation, Achashveirosh isn't bumbling. Nor is he wicked, although "making lost" an entire people doesn't sound so great. (But at least it's not genocide.) He's a shrewd political operator, manipulating people to achieve his personal goals, accrue power, and solidify his control over his kingdom.

Maybe that's what make people so nervous. It isn't that Trump himself is wicked, per se. Rather, it's all about the "Art of the Deal." Everything is negotiable. There's no way of knowing what deal he'd strike. That, in a world leader, is a frightening prospect indeed.
Posted by Reuven Spolter at 11:35 PM No comments:

Every year history seems to repeat itself. This year it seems to be repeating itself more than usual. The incredible universality of the Purim story leads me to make a bold prediction.
Click here to navigate to the shiur on YUTorah.org.

Did you know that this shiur is available as a free podcast on iTunes? Click here to subscribe - and leave a comment and rating so more people will find the shiur! Thanks!
Posted by Reuven Spolter at 2:45 PM No comments: