A Tale of Two Containers 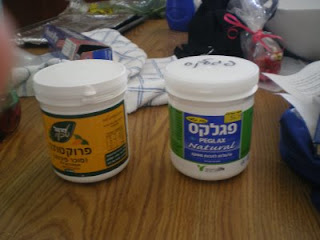 Two containers. They look the same. They both have Hebrew writing. Except, if you look closely, the one on the left is fructose, our sweetener of choice. On the right, you'll find peglax, the Israeli equivalent of Metamucil.
Add Erev Rosh Hashanah. Mix well. And you get the following:
Rena was making challah for Rosh Hashanah. (Don't say it.) She reached for the white canester, which of course contained fructose, necessary to make the challah rise properly. (Don't say it). Little did she realize that yes, instead of taking the fructose, she took the peglax. (There, I said it.) They looked the same. They both have Hebrew and are the same size. And no, we didn't discover her mistake after eating the challah. Long before.
Lesson for today: Don't keep your Israeli laxative in the food pantry.
Now we know.
Shanah Tovah! Have a sweet (and regular) year!
From the Spolters

Posted by Reuven Spolter at 3:20 PM No comments:

Even in Israel we hear about the financial crisis plaguing US banks and sending shockwaves around the world. The combination of the devaluation of the dollar combined with the drop in the stock market has especially affected the poorest of Israelis, who count on donations from the US to make ends meet, as noted in this piece in the Jerusalem Post. (And not all of them learn in Kollel. Many are just poor.)
So, we all breathed a sigh of relief when the US government announced a massive bailout plan aimed at stemming the crisis, relieving the pressure on the banking industry, and returning Wall Street to normal. Many pundits - both political and financial from across the spectrum have come to agree that no matter how distasteful the bailout seems to be, non-intervention on the part of the government would bring even greater pain and calamity than the cost of the bailout.
It sounds true. But the bailout still bothers me - not because of my conservative "small-government" leanings. Rather, the bailout bugs me because of teshuvah - or the lack of it.

It sounds depressing. It really is scary. But I cannot see how I'm misreading this situation. Am I missing something? Is there a silver lining? Is there any way that our society of debt - and living beyond our means, both as individuals and as a society - can escape unscathed? I don't see how.

But I sure hope I'm wrong.
Posted by Reuven Spolter at 12:45 PM No comments:

I Did Not Miss Selichot. But What if I Had?

I daven in a shul that has a minyan at 6:30am, followed by a second minyan at 7:30am. Because last night we recited Selichot for the first time at 12:30am, we had no need to arrive early for the morning davening.
After the first minyan ended, as I sat learning my morning mishnayot, a young boy - he looked about eleven - approached me. Would there be selichot, he asked me, before the 7:30 minyan. I didn't think so, but told him to ask the gabbai. The gabai told him matter-of-factly that because we had recited selichot during the night, there would not be an additional selichot in the morning.
The boy was crushed. Tears began to well in his eyes. He returned to his seat to wait for the second minyan to begin, and began to cry.
"Little boy," I called to him, "Come over here."
I showed him what he could recite from the selichot without the benefit of a minyan - reminding him to skip the י"ג מדות הרחמים - the 13 attributes of mercy of God - that require a minyan. When he learned that he could indeed, recite Selichot, he calmed down, returned to his seat, and began to pray.
And I wondered: what if I had missed selichot this morning - or any morning for that matter? Would I be upset, or would I simply chalk it up as "one of those things - what can you do?" Would I ever be so upset that it could bring me to tears?
I didn't think so.
I've got work to do.
Posted by Reuven Spolter at 7:26 PM No comments:

Today Rena and I went shopping. Actually, we went to the bank to get a loan for our car, and truth be told, it was a pretty good experience. The bank gave us a great rate (plus a discount on the loan), and the service was terrific. We waited almost no time, and were dealt with promptly and efficiently. (I know what you're thinking. Yes, this is Israel. Go to Bank Leumi in Kiryat Malachi, and speak to Dani. He's the manager.) While we were signing over and over again, I asked the woman helping us who she got auto insurance with. Not only did she tell me the name and give me the number, she picked up the phone and called them for us. That's Israel. It's like a big family.
In any event, we had some extra time, so we went to get a cup of coffee. Now in the States, you can also get a cup of coffee, but because it was a kosher coffee shop, we were able to drink our coffee not in the cheap paper cups, but in the glass mugs. It was just a pleasant experience that I really was never able to have in the U.S., and I appreciated being able to have it in Israel.
Then we went to the grocery store, where it's impossible to forget that Rosh Hashanah is coming. You walk into the store and there's a big sign that says, "Shanah Tovah!" The honey display is quite large as well. I even got into a small discussion with a middle-aged man about the sugar-free items in the health aisle of the store.
Finally, on the way out Rena bought a pizza at the store next to the grocery store, and she ended up having a nice discussion with the "secular" guy making pizzas about Rosh Hashanah and Yom Kippur. Rena commented on the fact that she never looks forward to Yom Kippur, and that it's a hard day. He told her that he always likes the day, because he feels spiritually cleansed and rejuvinated afterwards.
While each of these little vignettes aren't that special, put together I came away from a simple shopping trip with a great sense of positive warmth. While in America all our efforts go into living a Jewish life - who we congregate with; what we eat; where we go, in Israel, that life surrounds us in so many ways big and small.

All of this caused me to pause at a specific phrase that grabbed my attention from this week's parhsha. Ki Tavo begins with the מקרא ביכורים, the special declaration that each person must make when he brings his first fruits to the Kohen in the Beit Hamidash. Yet, even before he presents the bikkurim to the Kohen, the Torah tells us that,

And you shall come to the priest that shall be in those days, and say unto him: 'I profess this day unto the LORD your God, that I have come to the land which the LORD swore to our fathers to give us.'

The verse caught my eye because as I was reading it, I felt that I was reading about myself, and my family. כי באתי אל הארץ אשר נשבע ה' לאבותנו לתת לנו - I have come to the Land which God swore to give to our fathers. I truly have. It's exciting and chilling to personalize the words of Torah in such a meaningful way.
But the verse bothered me as well.
Rambam writes that this text is actually part of the ceremony of bringing the bikkurim. The farmer must put the basket of fruit on his shoulder and make this declaration to the Kohen. But this statement made me wonder: What does the farmer mean when he says, "that I have come to the Land which God swore to our fathers to give us"? Is that really true. Truth be told, he was probably born in Israel. He's lived there his whole life. He's never been anywhere else. Why then does he tell God and the Kohen that he has come to the land, when that in fact is untrue?
Kli Yakkar suggests that we cannot really call the Land our own until we have given of it to another. Only when we share the bounty of the land with others can we take ownership over the land that God has given us.
Which, I guess is really the point. The beauty of Israel is really the community; the fact that since everyone here is Jewish, we can, for the most part, eat together. We share holidays together. We wish each other a shanah tovah. We share our health issues with strangers, because we're not supposed to be strangers. And maybe that's when the Land truly becomes ours.
Posted by Reuven Spolter at 8:53 PM No comments:

Here's this week's PQK. Have a great week!
Posted by Reuven Spolter at 9:56 PM No comments:

Here's this weeks PQK. Enjoy!
Posted by Reuven Spolter at 7:21 PM No comments:

Out of the Mouths of Babes 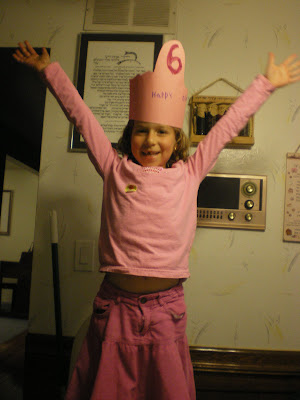 Leah, not really realizing it, put me in my place.
Me: "Hi Leah. How was school today?"
Leah: "Great!"
Me: "Yeah? What did you do?"
Leah: "Well, first we had davening, then we had art and made glue. Then we learned how to cross the street. Then we learned about a rabbi."
Me: "Oh yeah, which rabbi?"
Leah: "Not you."
Posted by Reuven Spolter at 3:35 PM No comments: