In Those Days and In Our Time 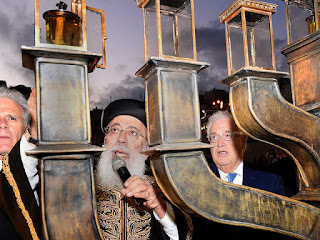 In his powerful essay Kol Dodi Dofek, Rabbi Yosef Dov Soloveitchik outlines what he views a six "knocks" – divine messages from heaven which a sensitive Jew must hear, recognize and incorporate into his or her religious worldview. He writes,

First, the knock of the Beloved was heard in the political arena. From the point of view ‎of ‎international relations, no one will deny that the rebirth of the State of Israel, in a political ‎sense, ‎was an almost supernatural occurrence. Both Russia and the Western nations supported ‎the ‎establishment of the State of Israel. This was perhaps the one resolution on which East and ‎West ‎concurred [during the Cold War era]. I am inclined to believe that the United Nations was ‎especially ‎created for this end — for the sake of fulfilling the mission that Divine Providence had ‎placed upon ‎it.

The Rav reminds us that sometimes political events, especially related to the Jewish people, represent something greater than simply the decisions of individuals. They reflect the guidance of the Divine, bringing blessing to the Jewish people and to the world.

I believe that this past month we experienced just such an event. For the first time since the fall of Jerusalem and the destruction of the Second Temple, the individual who represents the most powerful nation on earth (the President of the United States) officially recognized Yerushalayim as the capital of the Jewish State, the homeland of the Jewish people.

Some will argue that nothing has changed. Currently, they may in fact be correct. The US State Department announced that it has no plans to recognize my daughter (who was born in Hadassah hospital) as having been born in "Jerusalem, Israel" on her US passport. (As of now, she was only born in Jerusalem.) But if it's so unimportant, why did tens of thousands of Muslims protest in Indonesia? Why is the President of Turkey up in arms? Why is Egypt introducing yet another UN Security Council resolution aimed at declaring the American recognition illegal? Politics matter, and have very real consequences in world. While the President of the United States' statement was just, in his words, "a recognition of reality," it also established a new reality – one that Israelis intuitively appreciated and understood.

As religious Jews, we must ask ourselves: What is our religious response to this declaration? Have we responded spiritually in any way at all? I'm not referring to Facebook posts or WhatsApp messages. Rather, has this recent news affected us spiritually? Have we reacted religiously to this great gift to the Jewish people?

Orthodox Judaism is notoriously (and justifiably) conservative. We don't like change, and don't adapt to it very well. Our strength lies in our allegiance to our traditions; to adhering to the way things have been done because that's how our parents and their parents did things. We're reluctant to introduce new liturgy which makes us inherently uncomfortable (I'm still uneasy reciting parts of Lecha Dodi on the eve of Yom Ha'atzmaut). At the same time, that reluctance to innovate and introduce seems downright inappropriate in the face of historic events. If we can't or won't give thanks to God when our Holy City is recognized internationally as belonging to the Jewish people, what does that say about us as a religious people? I believe that one answer to the pull between these two values lies in coming to a new understanding and appreciation of a blessing and prayer we already recite throughout this entire week of Chanukah.

When we kindle the Chanukah lights we recite two blessings – the first on the rabbinic commandment to light the candles – a birkat mitzvah. Tradition teaches us that we recite a second blessing as well.

This is of course a reflection of the opening to Al Hanisim where we give thanks,

עַל הַנִּסִּים וְעַל הַפֻּרְקָן וְעַל הַגְּבוּרות וְעַל הַתְּשׁוּעות וְעַל הַמִּלְחָמות שֶׁעָשיתָ לַאֲבותֵינוּ בַּיָּמִים הָהֵם בִּזְּמַן הַזֶּה:
[And we praise You] For the miracles and for the redemption and for the mighty deeds and for the victories and for the battles that You performed for our fathers in those days at this time.

In his Levush commentary on the Shulchan Aruch (Orach Chayyim 682), Rabbi Mordechai Yaffe writes that in his opinion, one should add a "vav" to the last two words of this sentence.

The halachah does not follow the position of the Levush; the Taz (O.C. 682:5) rejects his suggestion and we don't add the additional "vav". Nonetheless, I find his sentiment inherently appealing. In addition to giving thanks for the miracles that occurred centuries ago, we must also give thanks to God for those miracles that take place in our time. And, if the author of the Levush – who suffered great persecution and exile, had no problem seeing hidden miracles in his lifetime, how can we, who live in the era of the greatest renaissance in Jewish history, not see even greater miracles today?
Commenting on the timelessness of Chanukah Rabbi Berel Wein writes that,

The Rabbis framed one of the blessings over the lights of Chanuka as recognizing the events ‘bayamim hahem,’ in those days’ bazman hazeh,’ in our time. We always have to look at how past events play themselves out in the current scene.

When we recite Al Hanisim and the second brachah of She'asah Nisim, we must concentrate not only on the miracles of long ago, but those taking place literally in our time – this year, and this month. It is incumbent upon each of us to add a special kavanah when reciting these brachot, to give thanks that dominion of the Jewish people of Yerushalayim has been strengthened and reinforced across the globe.

Finally, we must also give thanks and recognize that this small but significant declaration brings us closer to the day when the Jewish people will light the candles of the menorah not only in their homes, but in God's true home as well.
Posted by Reuven Spolter at 1:22 PM No comments:

Email ThisBlogThis!Share to TwitterShare to FacebookShare to Pinterest
Labels: Chanukah

Praying for Rain in an Age of Desalination

The Chief Rabbinate has issued a directive to add Anenu (an additional prayer for rain) to our shemonah esreh. This makes perfect sense and follows a long line of halachic tradition, from the Mishnah Taanit down through the Shulchan Aruch. Rain is a critical element, fundamental to human life. When periods of drought threaten, we must cry out to God and beseech Him for mercy to bring the necessary rain. While it has rained a bit, it hasn't been nearly enough, and halachically, this call is a response to a crisis situation.
Except it's not. There is no water crisis here in Israel. With four major desalination plants online producing vast quantities of fresh water at very reasonable prices, the country is not in any crisis at all. We've gotten no directives to cut our water use in any way. No one has even asked us to cut the watering of the lawn, nor have water prices risen. There is no water shortage.
So we're left with a situation where we're supposed to recite a prayer of supplication and anguish, of great need due to a technicality, where there really isn't that great of a need.
This is not meant as a criticism of the Chief Rabbinate - far from it! It's an expression of a sense of frustration from a disconnect between ritual and reality. Sure, Jews around the world will add Anenu. But will that translate into religious fervor? Will the words reflect any real feelings?
Is it better to add something to davening when it will just be one more paragraph that you don't really feel strongly about? How does this affect our connection with the rest of our davening?
There are many, many things about which we need to cry out to God. A terrorist stabbed a security guard yesterday. Hamas shot rockets this week. The Israeli government decided to subsidize televisions rather than education yesterday.
But until the Water Authority tells me to take shorter showers and stop watering my lawn, we don't have a water shortage. Why then are we praying like we do?
Posted by Reuven Spolter at 2:18 PM No comments: