Audio Shiur: Parshat Netzavim-Vayelech: The Connection Between Hakhel and Shemittah

Audio Shiur:
Parshat Netzavim-Vayelech: The Connection Between Hakhel and Shemittah

We here in Israel will spend a great deal of energy on one tiny aspect of Shemittah: What can and should we eat during the coming years? But, in doing so, we'll also be ignoring many essential aspects of Shemittah, that we can discover by examining the connection in the Torah between Shemittah and the mitzvah of Hakhel.

Click to play the Shiur (or right-click to download)
Posted by Reuven Spolter at 1:10 PM No comments: 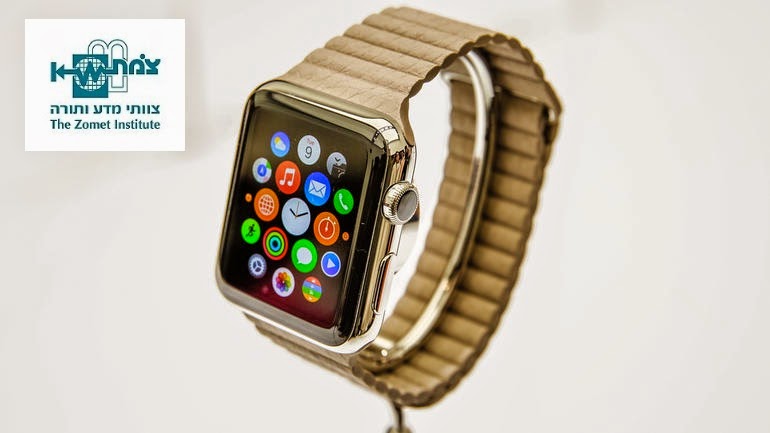 Cupertino (JTI) - With great fanfare, Apple, the worldwide leader in portable technology, recently introduced the AppleWatch, a smart-phone connected smart-watch which monitors health, relays messages, tells time, and performs hundreds of other currently unknown functions, which will only become known when they are actually developed. Yet, this new device will present a challenge to Sabbath observant Jews, who cannot text, email, watch movies on their wrists, or send playful pings to their spouses sitting on the other side of the mechitzah.

Solving a Dilemma
To alleviate the Shabbat concerns of the AppleWatch, and to encourage the large market of religious Jews who will rush to buy Apple's latest offering, Apple reached out to the Zomet Institute in Alon Shvut outside Jerusalem, which has developed numerous technological innovations that allow Jews to live fully technological lives, without technically violating the Shabbat, according to some opinions.
"We were excited to work with Apple," said Rabbi Israel Rosenberg of Zomet. "The AppleWatch will undoubtedly become the must-have item of 5775, and we wanted to ensure that religious Jews weren't left out."
Asked about the modifications necessary to turn on the AppleWatch SabbathMode, Rosenberg beamed. "You don't have to do anything at all. The SabbathModeAppleWatch comes pre-programmed to sense your exact location, down to plus or minus two centimeters, so that the watch can turn on the Sabbath mode setting automatically for the next eleven thousand years, based on your location, the time, the day of the year, and whether you hold of Magen Avraham or Rabbeinu Tam." Asked how a watch could possibly identify an individual's halachic propensity, Rosenberg simply said, "Siri knows."

What Does it Do?
What does the AppleWatch do in SabbathMode?
"Actually," said Rosenberg, "this presented both halachic and technological challenges." As the AppleWatch is a health-monitoring device, Zomet felt reluctant to limit the blood-pressure monitoring software in the case of a health-related need. Thus, the watch will, based on an individual's health status, decide whether to (a) shut down health monitoring, (2) monitor blood pressure regularly or (3) call Hatzolah, if necessary. Zomet programmed the watch to call the appropriate phone number, again based on location.

What does the device do on Shabbat for a healthy wearer?
Rosenberg explains that the patented technology, sensing the arrival of Shabbat, deactivates all sensors and wireless communication, and places the AppleWatch in a time-only mode for the duration of the day of rest. The software also deactivates the alarm, and any buttons, so that a Sabbath observant wearer does not accidentally press a button, forcing him to wear the watch in StopWatch mode for 24 hours.

Email ThisBlogThis!Share to TwitterShare to FacebookShare to Pinterest
Labels: Shabbat and Technology

Ray Rice, Teshuvah, and The Book of Remembrances

I've been thinking recently about the Ray Rice video (showing him knocking his wife unconscious in a hotel elevator). Before the revelation of the video, he received a two-game suspension, and was set to resume his well-paying career as an NFL running back. After the release of the tape he was fired, suspended, and may never play football again, costing him literally millions of dollars in lost revenue.
What really happened this week? Did Ray Rice do anything different? Did we not think after the release of the first video  (showing him dragging his wife out of the elevator) that he had hit her? Did we imagine that she suffered from a diabetic-related sudden blackout? Hardly. The world "knew" what had happened, but without the information right before our eyes, we looked the other way. We forgot. We moved on.
That's exactly what happens to us as we approach Rosh Hashanah.
When the time comes to make an accounting of the year, in order to begin the process of repentance and renewal, suddenly things become quite fuzzy. We conveniently forget the many, many times we acted  selfishly, harshly, crudely, nastily - you name the adverb. We forget the times we forgot to pray, bentch, make a brachah, do a mitzvah. We forget our sins - or at least the vast majority of them, and when looking back at the year think to ourselves: Sure, I can always improve, but I had a pretty good year, didn't I? Sure I did, assuming that I forgot all of my blunders, mistakes and misdeeds.
There's only one problem: there's a tape, just like the Ray Rice recording. Of everything,
The Gemara in Rosh Hashanah relates a familiar but chilling image.

אמרו מלאכי השרת לפני הקדוש ברוך הוא: רבונו של עולם, מפני מה אין ישראל אומרים שירה לפניך בראש השנה וביום הכפורים? - אמר להם: אפשר מלך יושב על כסא דין
וספרי חיים וספרי מתים
פתוחין לפניו - וישראל אומרים שירה? (ר"ה לב, ב)
Said the heavenly angels before the Holy on Blessed be He: Creator of the world, why is it that Israel does not recite words of praise (Hallel) on Rosh Hashanah and Yom Kippur? [God] said to them: is it possible that the King sits on the seat of judgment, with the books of life and the books of death open before him, and Israel should sing praise?

The Midrash raises a number of fascinating questions, such as: what is the book of the dead? Who in fact is being judged (see here for a fascinating interpretation); why not sing praise during a time of judgment? Wouldn't that get us a better deal? But we'll leave those aside to ask another question: what's written in those books?
During Unetaneh Tokef, we get even more specific. In the context of this solemn, chilling prayer, we say to God,

What is this "Book of Chronicles" that God reads on Rosh Hashanah while standing in judgment? What's written in it? And I don't remember signing any such book?
Actually, we've seen a similar book before in Tanach - in the Book of Esther, when the king can't sleep and has his servants read from his ספר הזכרונות - Book of Remembrances. Only then does he remember the favor Mordechai did in saving his life, and takes steps to repay Mordechai (and save the Jewish people). What's in this book? It's a detailed diary of everything - every word we've said over the past year, and over our entire lives. Every thought. Every feeling. And every action.
But the author of the Unetaneh Tokef poem only used the language and imagery available at his time. The idea of the signature connotes the undying accuracy of what's written in the book. How can you deny the veracity of a book's contents if they bear your signature. Today we'd say it differently. If we were writing a modern Unetaneh Tokef we'd say:


It is true that You alone are the One Who judges, proves, knows, and bears witness;
Who writes and seals, Who counts and Who calculates.
You will remember all that was forgotten. You will open the Divine YouTube,
— from it, all will be viewed - in which everyone's action are found.

There is a video. Of everything. Whether you can see it or not, there is a camera in the room. In all probability, there is in fact a camera on the device you're using to read these words. So it's not that difficult to imagine. Except that it's on, and recording, all the time, uploading to a special Sefer Zichronot YouTube site we cannot access. While we might not have access to this specific version of YouTube, it's there, and one day we too will watch it.
In the aftermath of the Ray Rice media circus, his wife Janay (who he punched) wrote, "To make us relive a moment in our lives that we regret every day is a horrible thing." It must indeed be horrible to have your worst mistake splashed on screens around the world; to have to live with the consequences of your most terrible behavior for the rest of your life.
But it's not just Ray Rice.
It's all of us. We just might not realize it yet.
Posted by Reuven Spolter at 6:00 PM No comments:

You might not expect simchah to be a primary theme found in Ki Tavo, the parashah of the Tochechah. But it is. How do we find joy, and why is it critical to a proper religious life?

Click to play the Shiur (or right-click to download)
Posted by Reuven Spolter at 3:12 PM No comments:

The troubling section describing the treatment of the rebellious son causes many of us today to recoil: kill him? For what? For what indeed. Not to worry - we're not the first to ask these questions, and the answers that Chazal and the commentators offer have a lot to teach us about ourselves as individuals, as parents, and as we prepare for Rosh Hashanah.

Click to play the Shiur (or right-click to download)
Posted by Reuven Spolter at 12:25 PM No comments: