In the second-to-last session of "The Search for Truth," a conference sponsored in Detroit by the Jewish Forum, Dr. Marc Shapiro spoke about "The Lives of Gedolim and the Truths of History." He gave a fascinating presentation, describing his discovery and procurement of the famous letters exchanged between Rabbi Yechiel Ya'akov Weinberg, author of the Seridei Eish, and Dr. Samuel Atlas of the Hebrew Union College. During his talk, I found myself bothered by his basic thesis. He felt that while he understood that some communities might feel that gedolim are elevated only through hagiography, he felt quite the opposite: that when we expose the fact that these great people were normal; that they had faults and yet achieved greatness, this only increases their stature in our eyes. 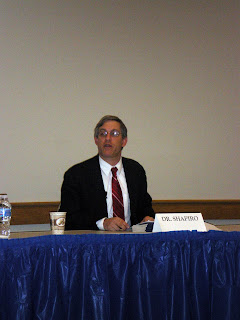 Yet, none of this really relates to the letters of Rabbi Weinberg. The basic goal of publishing the letters, as I understand them, was to reveal the fact that the Seridei Eish wasn't a one-dimnesional posek in the classic chareidi format, but rather that he was a muti-dimensional, complex individual who valued many different things. In essence, Dr. Shapiro seems have a clear agenda to illustrate that the Seridei Eish was, for lack of a better word, Modern Orthodox.

I don't really know enough to dispute that claim (or agenda), but the whole nature of the discussion bothered me. While Dr. Shapiro's thesis about the Seridei Eish might certainly be true, the letters that he published were truly private. Rabbi Weinberg never published them, but instead sent them to a friend in confidence. After all, aren't private letters supposed to be confidential. In fact, Dr. Atlas saved his letters but never disseminated them publicly, and it was only his widow - who really had no appreciation for the implications of the publication of those 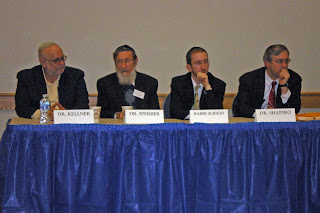 letters -- who gave final permission for him to use them.
To me, this raises the complicated issue of rabbinic privacy. Of course the Seridei Eish was a gadol, and his halachic works and other public writings have defined him for posterity. But does that public persona then make his entire life "public property"? Doesn't he also deserve to have a private life?

It seems to me that Dr. Shapiro, working in the hallowed halls of the University, has taken the scholarly stance that history must be studied and revealed for history's sake. Every event belongs to the public record, and may be revealed if it carries enough importance.
During his talk, I challenged Dr. Shapiro on this point of privacy, and he responded by making the following distinction. If a he discovered that "great gadol" had a child out of wedlock, but then took care of the child's needs financially, religously and emotionally, and lived up to his responsibility, then he would not publicize that fact about the gadol's life. If, on the other hand, the gadol ignored that child and swept his existence under the rug, then he would reveal that fact because it demonstrated that he wasn't a gadol after all." In essence, he agreed that not every fact or personal foible needs to be revealed -- and that he would only reveal information that he regarded as historically relevant.

Which to me -- only seems to prove my point. Even Shapiro agrees that historical figures deserve some level of privacy. He himelf would not reveal private, defamatory information that he felt had no "larger" relevance. If so, then we both agree that rabbis -- even great ones -- deserve privacy. The difference between our opinions, it would seem, is that I feel that halachah guarantees an individual -- even a dead figure -- the inherent right to privacy, whereas Dr. Shapiro feels that he has the right to make a subjective decision about what rights each figure deserves and receives.
All of this makes me wonder: if someone knew that living a prominent and important life would open his entire life up to intense scrutiny and examination, and make his most private feelings and behaviors fodder for history to publicize, who would want to become a leader? Who would want to be a gadol? Why would anyone want to be a rabbi?

Email ThisBlogThis!Share to TwitterShare to FacebookShare to Pinterest
Labels: Rabbis